I had another post in mind for today and I realized that today was the day that the "Shield" became the "Storm".  This was the day we unleashed hell on the Iraqi's in Kuwait and in Iraq.
We had benefited from 10 years of development, new equipment,  good funding and training and more training. Our Morale was really high, and it showed. The Army had developed "Airland Battle" to disrupt the Soviet echelons especially in the 2nd and 3rd echelons, and the Iraqi's were trained like a Soviet Pattern Army,. The Navy and Air force had also benefited from good training, doctrine, equipment and excellent morale.  Gone was the days of the Post Vietnam Military, the hollow Army was gone, gone was the days of the Navy and Air force cannibalizing equipment to maintain readiness and make deployment goals, We had pride in ourselves and our country.   There was a fear that we didn't learn the lessons from Vietnam, according to the pundits.  Well we had a bunch of leaders that were in Vietnam and vowed that this first major deployment of the U.S Military since Vietnam wouldn't be the same way.  We would go all in or we wouldn't go.  And we succeeded.  The defeat of the Iraqi's was massive.  Saddam Hussain had the crappiest timing since the Argentinians tried to take the Falkland Islands from the British.  Had they waited 1 more year Britain wouldn't have the Navy or the forces to take the island back.  Well Saddam was the same way, before he rolled into Kuwait, there was rumblings of cutting us back since the Cold war was over and the huge Military wasn't needed anymore.  Had he waited a year or 2 we couldn't have mounted the force we did.  Funny how things work out.


I don't normally make a big deal about my veteran service,I have met awesome people and done things that seen things and witnessed history in the making, and I would go back in time and do it all over again. But this is the day when the War started and it changed my life forever. I view everything in my life as "before the Storm" and"After the Storm". I honestly believe that it has made me a better person and more understanding the duties of a citizen of the Republic. This is to my fellow Veterans, don't matter the service or the time and to those that still walk the ramparts. 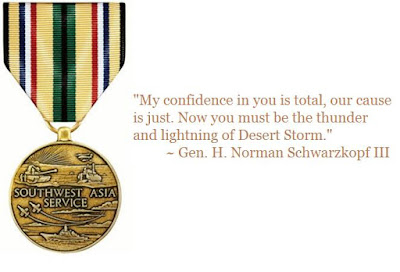 Posted by MrGarabaldi at 7:40 AM