I remembered hearing of this stuff a few years back, when I was researching the "Romping Stomping Red-Army"  People now can't imagine stuff like this going on, I heard of experiments of the Navy, dolphins and Mines.  I try to keep in context, that the there were several factors with the Soviets, they were trying to survive, the first couple of years the war on the Eastern Front was in doubt.  Also to the Soviets, everything belonged to the people, meaning "The State".  And the state decided how much worth you had as an individual and as a person.  Traditionally with communist governments, you ain't worth much at all and dogs even less.  To a person raised in a western based society such things are almost unfathomable.  But in other places in the world, life is really cheap. 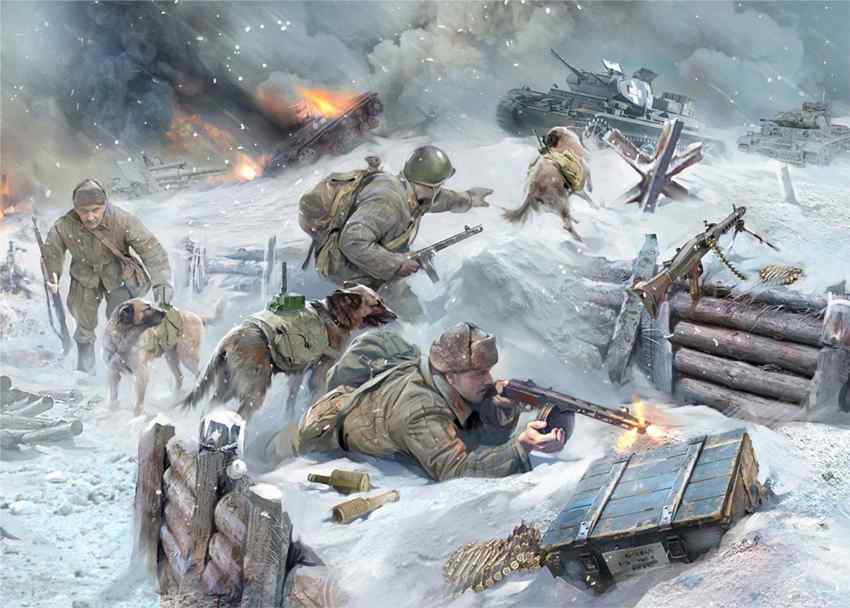 The idea of using anti-tank dogs was nothing new for the Soviet Union. They had looked at the possibility back in the early 1930s and gave the weapon the name “dog mines” or “Hundminen.”
It is easy to dismiss this idea as some kind of impractical novelty. It seems ridiculous to think that bomb-carrying dogs could ever be viable weapons, especially against tanks. But there is a long history of animals being put to imaginative uses in warfare.
From the war elephants used by Persians in the 3rd Century BC to carrier pigeons being used during World War One for long-range communication, both were highly successful.
So, by 1935, the Soviet Army was setting up dedicated anti-tank dog units. Training the dogs was simple: they took a Pavlov’s theory type approach.
They would half-starve the dogs and then put food under a stationary tank. Over time, the dog would be conditioned to instinctively search under tanks for food.
The original idea was that the dog would be equipped with a bomb that could be detonated using a timer or remote control. The dog was trained to run under a tank where it would release its bomb by using its teeth to removing the strap holding the bomb. Then it would run back to its handler.

In tests, it was a complete failure. If the dogs were confronted with anything but the most simplest of scenarios, they became confused and were unable to complete their mission.
They often returned to their handlers with the dummy bomb still attached. If that happened with a real bomb on a timer, the consequences could have been fatal to the handler and any Soviet troops nearby.
But then came the surprise German invasion of June 1941 and the onslaught it brought. The Soviets began to deploy their Hundminen units. They were desperate and needed to stem the flow of ever increasing numbers of Germans as Operation Barbarossa gained momentum.
By now, the equipment and tactics used were starting to become standardized. Various breeds of dogs were used, but the most commonly used was the Alsatian (German Shepherd) which, ironically, was a German breed of dog.

The bomb now used was of a contact type, rather than the complex and flawed timer or remote control version. The dogs now carried a bomb with about 25lbs (11kg) of explosive, contained in a set of pouches, one on either side of the animal.
Once the bomb was activated by removing the safety pin, an 8-inch wooden spring lever that was sticking out of the top connected to the two pouches. If the lever came into contact with anything and was pushed back sufficiently far, the bomb would detonate.
As the dogs were trained to run under a tank, it was anticipated that the bottom of the tank would set off the bomb. As the armor was normally very weak here, it was hoped that the ensuing explosion would at least disable the tank, if not destroy it completely.
The units were used between 1941 to 1942. But many problems were encountered that reduced their effectiveness greatly:
The Germans mocked the use of dog units. They claimed the Soviet soldiers were too afraid to fight and instead had to send their dogs into battle. The Germans considered these anti-tank dogs to be a highly desperate and inefficient form of weaponry.
On the other hand, it seems the Soviets boasted of great successes. They claimed that at Stalingrad (1942-43), the dogs destroyed 13 tanks. Then at Kursk (1943), a further 16 were destroyed. It was alleged that the Hundminen destroyed a total of around 300 enemy tanks, although records show the more likely number was nearer 50 tanks. 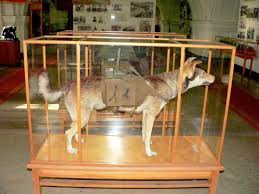 The truth is we will never know what their true effectiveness was. However, considering the obvious drawbacks and the fact they were only deployed for a short time, it would seem reasonable to say that anti-tank dogs were a novel idea with limited value, deployed only out of necessity.

Posted by MrGarabaldi at 8:03 AM