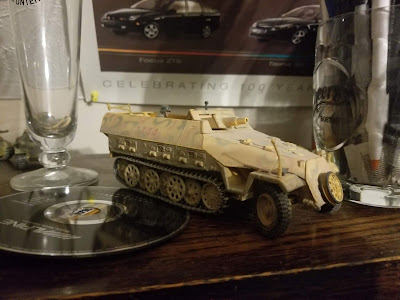 One of my models...SD/251 "Stummel"
I ran across this article and I remembered the unique vehicles the Germans made during WWII. 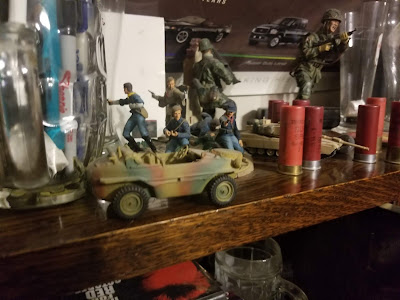 The "KubelWagon" model that I also have along with my "Custer's last stand" a couple of German "Assault Troops" and an M-1 hiding behind a shotgun shell.

During the Second World War, the Germans made extensive use of military vehicles to master a new form of warfare, in which the combustion engine replaced horse power and armored formations dominated battlefields. To do this, they developed a wide range of military vehicles, including a series of armored cars.
Though Hitler and his ministers did much of the work in turning Germany towards mobile, armored warfare, their predecessors were not ignorant of the power of fighting vehicles. In 1932, the year before the Nazis came to power, the German army commissioned its first widely used armored car
The Kfz 13 was meant to fulfill two roles. In the long term, it would act as a reconnaissance vehicle, giving German scouts the speed, range, and protection they needed to safely observe enemy positions. In the short term, it would provide a stopgap vehicle for armored units until more tanks and specially built combat vehicles were available.
To make production quick and cheap, the Kfz 13 was built by welding a steel hull onto the chassis of a commercially available car, the Adler Standard 6, and equipping it with a machine gun. Because of this design, it didn’t do well when traveling off road and it had a high center of gravity that led to accidents. Its armor wasn’t thick enough to properly protect the two-man crew even from small-arms fire.
The Kfz 13 was still in use in 1941, when some were used in Operation Barbarossa. It also proved useful as a training vehicle.

Left: a Kfz 13; right: an armoured Sd.Kfz. 232 with large loop antenna (6-wheeled radio and command vehicle).Photo: Bundesarchiv, Developed by Auto-Union/Horch and serving from 1935, the Sd Kfz 221 was the smallest of the specialist armored cars that superseded the Kfz 13. This time, the chassis was specially developed for military purposes, with a rear engine, four-wheel drive, low-range gears suited to cross-country travel, and sloped side armor. Its open-topped turret usually carried a 7.93mm machine gun, though some were equipped with an anti-tank rifle.
In 1938, an improved version was produced – the Sd Kfz 222. As well as minor changes to the design of the hull, this saw the turret weapon replaced with a 20mm automatic cannon and the engine upgraded to improve its power.
These vehicles saw service throughout the war.
Though work on designs began in the late 1920s, it took until 1933 before the German army was equipped with its first six-wheeled armored car, the Sd Kfz 231.
The Sd Kfz 231 appeared in different models from three different manufacturers – Daimler-Benz, Bussing-NAG, and Magirus. All three models were built to the same specification, so despite differences in detail, they were largely similar.
Each chassis was built around the commercial truck design of the relevant manufacturer, strengthened to make it suitable for a military role. The engine was at the front and could be operated either from there or from a secondary driving position at the rear, letting the vehicle travel at top speed in either direction. Bulletproof tires and armor 8-15mm in thickness gave the vehicle some durability.

Sd.Kfz. 231 Heavy armored scout car
The Sd Kfz 231’s turret was hand operated. It carried either a 20mm cannon or a 7.92mm machine gun. Variations included a communications vehicle with a distinctive aerial array.
Around 1,000 Sd Kfz 231s were produced by 1936. At that point, they were superseded by an eight-wheeled vehicle and so manufacturing stopped, but the existing cars remained in service. They were used in the invasions of Poland and France, then relegated to internal security and training work.
Shortly after the development of the six-wheeled Sd Kfz 231, the military put out a requirement for an eight-wheeled armored car. Bussing-NAG had previously created a chassis for an aborted eight-wheeled cross-country truck, and this was adopted to form the basis of the new armored car, which became the Sd Kfz 232. 8 Rad Sd.Kfz. 232 radio vehicle of the 5th SS Panzer Division Wiking in Russia, 1941.Photo: Bundesarchiv, BildThe Sd Kfz 232 had an armored body built over a relatively slender chassis. It was originally equipped with a 7.92mm machine gun and a 20mm automatic cannon, but this was later upgraded to a short 75mm gun, with this more heavily armed vehicle given the designation Sd Kfz 233. Despite its complex mechanical layout, this series of vehicles became very popular with the army and they were widely used.
The most distinctive feature of these vehicles was the way their wheels were arranged. They were divided into two sets of four, each mounted on a separate bogie, one at the front and one at the rear. All eight wheels were both steerable and driven, given power by a series of transfer boxes and differentials from the engine at the rear.
In most circumstances, the rear bogie was locked and the front wheels used to steer, but this arrangement could be reversed in emergencies, allowing a rear driver to steer the vehicle backward.
By 1940, the eight-wheeled armored vehicles had already seen their engines improved, but now a more substantial redesign was ordered, resulting in the Sd Kfz 234.
This time, the chassis and suspension were integral to the hull. Thicker armor was added, along with greater fuel capacity and air brakes.
One of the big reasons for the redesign was so that the vehicle could be tailored to fighting in hotter conditions, as Axis troops were engaged in fighting against the British in North Africa, a theater were armored vehicles played a leading role. As a result, the Sd Kfz 234 was equipped with an air-cooled engine. Sd.Kfz. 234 4 Pakwagen, Munster Panzermuseum, GermanyProblems with this engine slowed down the development of the vehicle and by the time it was ready the campaign in North Africa was over, thanks in part to the arrival of American forces. But the Sd Kfz 234 still found a useful place fighting against the Soviets.
Germany’s eight-wheeled armored cars were among the country’s best vehicles of the war, used widely and effectively in campaigns across Europe.
Posted by MrGarabaldi at 8:24 PM