The First time the Soviets blinked...

I wanted to get away from current events for a bit and go back to the historical post that I normally do on my blog because the current event stuff really pisses me off so to save my blood pressure, I changed up a bit, LOL


I have blogged a lot about Berlin, I was attached to one of the communities associated with Berlin during the cold war.  Next to my love of Stuttgart,  I have a keen attachment to that city.  One day I want to return to Berlin and Stuttgart and see how thing have changed.   Now for some background.
After the war, Germany and Berlin was partitioned into 4 areas of responsibility by the victors of the war, The Soviets got the eastern half of Germany and the eastern half of Berlin and according to the agreement at Yalta, I believe they got the honor of capturing Berlin, Eisenhower was fine with that idea, from what I have read, he didn't want to sacrifice American lives in a symbolic gestures of capturing the German capital,  Stalin wanted that feather, he didn't care about casualties, just the bragging rights.  Eisenhower had the mindset that "sure, capture the capital, then have to give half of it back to the rest of the allies"  George Patton of course incensed that we let the Godless communist capture the capital.but I digress. Well anyway in my mind this factored in the attitude about forcing the allies out of Berlin in 1948 in Stalin's mind, the Red Army paid for for it, anyway they the Soviets already owned it. 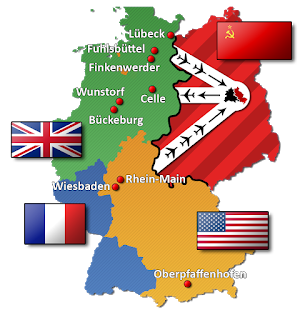 I clipped the following article off one of the history magazines I have in my bookmarks.

June 25, 1948, the Soviet Union, flush with the success of driving the Nazis out of Russia, was becoming piqued at the US and British. Relations were rotten. The Soviet Communists had imported their dictatorial politics to East Germany and were losing the battle for the hearts and minds of the Germans. You see, the Germans had seen years of Allied generosity and a willingness to restore democratic freedoms that Hitler had removed since the 1930s. Given a choice, the Germans were choosing the Western ideals.
The Soviets would have no part of it. Or should I say the Communists since the resistance to the West did not come from the Russian people, it came from the Communist Party which saw the clash in Berlin as a PR disaster in the making.

Soon the Communists decided that they were simply going to elbow the Americans French and the British out of Berlin altogether. ‘The transport division of the Soviet military administration is ordered to halt all passenger and freight traffic to and from Berlin tomorrow at 0600 hours because of technical difficulties. West Berlin will receive electricity only between 11 p.m. and 1 a.m….’
It escalated to April 1st, 1948, when U.S. authorities had refused to submit to Soviet inspection of military rail shipments. A fight was avoided by negotiations. But a passive aggressive stance became the tactic of the day when on June 15th, Communist forces shut down the autobahn. Their claim was that it needed repairs.

Posted by MrGarabaldi at 9:44 AM

Email ThisBlogThis!Share to TwitterShare to FacebookShare to Pinterest
Labels: Berlin