We had a discussion about General Grant on Farcebook


I had Started working on this post Yesterday but was too tired to finish it and spent all day today running around today doing errands and going to physical therapy, apparently, I have a pinched nerve in my back......Joy....Joy.....Rapture....... 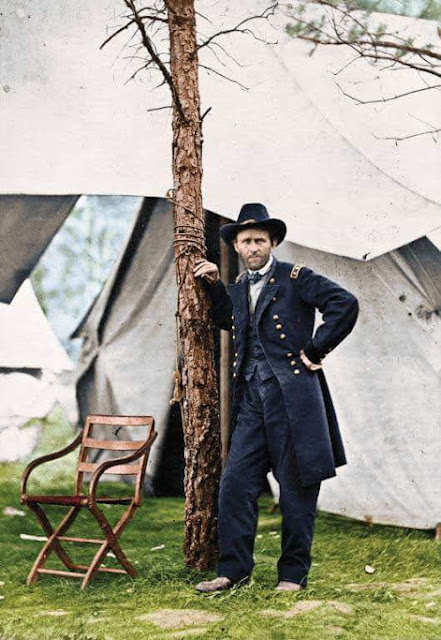 Colorized Picture of General Grant after the battle at Cold Harbor

Apparently some of the anarchist/BLM/Communist/  destroyed General Grant's Statue on San Francisco, the guy that saved the Union that freed the slaves and pushed through the KKK acts that punished the Klan for killing the freed slaves in South Carolina.
I had considered General Grant the first of the modern Generals. he didn't romanticize war, he wanted to end it as fast as possible.  He had a phrase he would use " You pay the butcher bill now or you pay it later when it cost more."   General Grant used strategic, tactical and logistical means and he utilized all of them in harmony to accomplish a strategic goal.  General Grant was on good terms with Admiral Farragut and General Sheridan and Sherman who gave him the far reach that he used to strike far distances away from the center of gravity that was the Army of Northern Virginia.  General Grant kept everyone focused on himself and General Lee because General Lee had made the army of Northern Virginia the center of the Confederate war effort. General Patton later used the same tactic called "hold them by the nose and kick them in the ass"  General Grant knew that the center of gravity of the Southern war effort was the Army of Northern Virginia.
General Grant and General Lee were 2 totally opposites, one was related to the son of a revolutionary war hero and the other was a son of a tanner.  General Grant was an ordinary man who by bulldog determination did extraordinary things.  General Grant by all measures was a failure when he was a civilian, he was called a drunkard, and if it wasn't for the charity of his father in law, he and his family would have been destitute.  I believed that his drinking was caused by his lonely posting in California without his family and dealing with an douche for a commander and Grant resigned.
U.S. Grant Spent the next 7 years doing whatever it took to keep his family fed then the Confederate's fired in Fort Sumter and his friend who knew about his experiences during the Mexican War persuaded Grant to seek a commission and he did and Grant became Colonel of Volunteers and the rest became History. 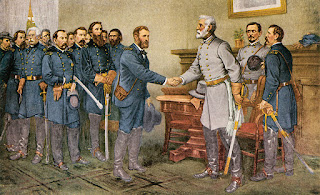 General Grant was under orders by President Lincoln to let Lee and his Army down Easy so he let the Officers keep their sidearms and swords and he pardons the entire army.    With the Assassination of Lincoln by Booth, the Reconstruction was far worse than it could have been, the Radical Republicans lead by Scranton who neutered Johnson, Lincolns Veep, in a successful impeachment trial which neutered him.  Scranton wanted to punish the south which Lincoln would have been able to block, but with Lincoln gone, Scranton put the screws to the south in the name of "reconstruction" which acerbated bad feelings for generations.
Posted by MrGarabaldi at 6:04 PM