One of my readers suggested this song for my run of "Bugaloo" songs and I vaguely recall this song in the early/mid 1980 while I was in high school, so I listened to it and it was pretty good and would be an excellent edition for a "valhalla' song as you stacked magazines and prepared yourself.
H/T BadFrog

I figured it would scar the alphabet boys if they come busting in and hearing a song that is related good music in the 1980's unlike that crap they listen to now.  What can I say, My humor is warped....just a bit. Next week will be "Don't Change" by INXS,  Now that should really cause some psych evals., hehehe, some poor ATF guy trying to explain the attraction to his mother because of Nose rings, tattoo's Leathers and bondage...but it is ATF people you know......

"The Trooper" is a song by the English heavy metal band Iron Maiden. It was released as the second single on 20 June 1983 from the band's fourth studio album, Piece of Mind (1983). It was one of only a few songs to get much radio airplay in the United States, thus peaking at No. 28 on the US Mainstream Rock charts.[1] It also achieved success in the United Kingdom, peaking at No. 12 in the UK Singles Charts as well as gaining a much better reception than the band's previous single, "Flight of Icarus" 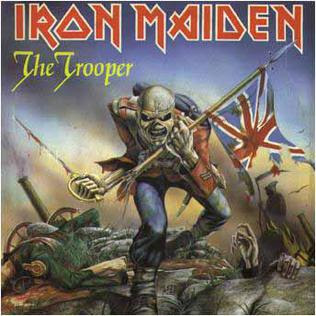 Written by bassist and founding-member Steve Harris, the song is based on the Charge of the Light Brigade at the Battle of Balaclava 1854, which took place during the Crimean War, and inspired by Lord Tennyson's poem of the same name. The track has been the subject of much praise since its release, with AllMusic describing it as "an all-time genre classic that boasts guitarists [Dave Murray] and [Adrian Smith's] most memorable harmonized lead riff, plus that trademark galloping rhythm," while Mick Wall comments that it is the song "which most Maiden fans from those days still recall first when you mention the Piece of Mind album." Despite the popularity of the song, it was the single's B-Side, a cover of Jethro Tull's "Cross-Eyed Mary", which managed to gain a substantial amount of airplay on US radio, becoming one of the band's few tracks, along with previous single "Flight of Icarus", to do so.

The single's accompanying music video included clips of a cavalry battle from the 1936 film The Charge of the Light Brigade, starring Errol Flynn and Olivia de Havilland, which the BBC refused to play unedited, deeming the footage too violent. The band's manager, Rod Smallwood, has since criticised the decision, stating, "Anyone would think we'd killed the horses ourselves instead of using an old Errol Flynn movie."
A regular fixture in the band's concerts, vocalist Bruce Dickinson has always waved a Union Flag during live performances and, more recently, has begun wearing an authentic red coat uniform which would have been worn during the battle on which the song was based. During a performance in Dublin in 2003, Dickinson's flag-waving reportedly received a large amount of booing from the Irish audience. 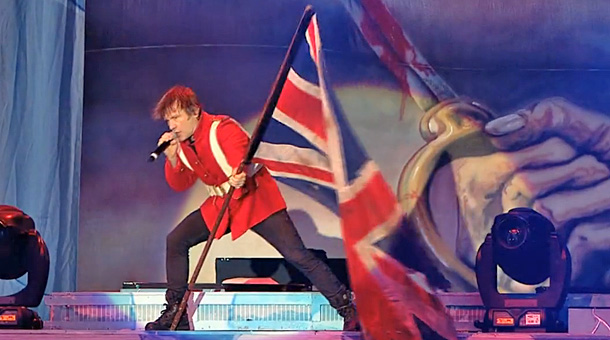 While the band were receiving criticism from Sharon Osbourne in 2005, at the time justifying her attack on the band at the 2005 Ozzfest, she accused Iron Maiden of disrespecting American troops, then fighting alongside the British in Iraq, for waving a Union Flag in the US, although Classic Rock magazine supported the band by pointing out that the song's subject bore no relation to the military activity then taking place in the Middle East.
Posted by MrGarabaldi at 5:00 AM