Monday Music "Who Made Who" By AC/DC


I am continuing my string of "bugaloo" songs.  This discussion was started in the "Monster Hunter Nation, Hunters Unite", back in December? it is a Facebook group with enthusiast of the ILOH "International Lord of Hate" A.K.A Larry Correia.  We were talking about what song would we use if we looked out of our window or glanced at our security camera and saw this.....

I figured it would scar the alphabet boys if they come busting in and hearing a song that is related good music in the 1980's unlike that crap they listen to now.  What can I say, My humor is warped....just a bit. Next week will be "Something About you" by Level 42,  Now that should really cause some psych evals., hehehe, some poor ATF guy trying to explain the attraction to his mother because of a Tricked out Semi Truck with a Goblin Face  running over people..., ...but it IS  ATF people you know.. 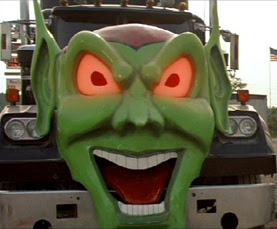 I first heard this song on the "Maximum overdrive " movie.  Yeah I know the critics killed the movie, but we GI's loved the movie partly for the sound track that featured AC/DC whom had several songs on this movie. the kind of music you wanted to play LOUD.  Even now I know that it is cheesy but I still like it.   I was overseas and the area that it was filmed reminded me of "home" it was filmed in the south.  One of my favorite lines from the movie was : A disclaimer in the final shot reveals that two days later a Soviet ‘weather satellite’ destroyed a large UFO orbiting Earth with a laser cannon and several nuclear missiles.

"Who Made Who" is a song and a single by the Australian hard rock band AC/DC, taken from their 1986 album, Who Made Who. The 12-inch single format of the single features an extended mix of the song and can be found in the Deluxe Edition of AC/DC's Backtracks Boxset, on Disc 1, Studio Rarities. It was one of only three new tracks on Who Made Who, because the album is not only a soundtrack to Stephen King's Maximum Overdrive, but a compilation album featuring tracks from previous albums. The other two new tracks were instrumentals. 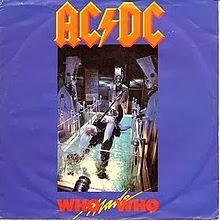 In the video to this song, directed by David Mallet, fans and radio contest winners were dressed like Angus Young, and carried red cardboard guitars similar to Angus's Gibson SG. The video's plot features scientists replicating Angus by means of science fiction technology; the lookalikes are shown en masse, marching in time to the song and raising their heads to chant the title phrase along with the chorus. A photo of Angus standing amid a group of his counterparts can be found inside the 2003 Digipak release of Who Made Who. A couple of AC/DC shows had some look alike Anguses on the stage with them. One show was at the Nassau Coliseum in Uniondale New York, six to be exact.
In addition to the song itself, "Who Made Who" has also been played live, mostly throughout the subsequent world tour and the Blow Up Your Video World Tour. It was also played live with replacement drummer Chris Slade throughout The Razors Edge World Tour, and with drummer Phil Rudd (who returned to the band in 1994 after being fired from the group 11 years prior) for only one gig at the opening night of the Ballbreaker World Tour in Greensboro, North Carolina, after which the song was dropped and has not been played live since. A live version was released on the 1992 album AC/DC Live.

Maximum Overdrive is a 1986 American action-disaster-horror-science fiction film written and directed by novelist Stephen King. The film starred Emilio Estevez, Pat Hingle, Laura Harrington and Yeardley Smith. The screenplay was inspired by and loosely based on King's short story, Trucks, which was included in King's first collection of short stories, Night Shift.
Maximum Overdrive is Stephen King's only directorial effort, though dozens of films have been based on King's novels. The film contained black humor elements and a generally camp tone, which contrasts with King's sombre subject matter in books. The film has a mid-1980s hard rock soundtrack composed entirely by the group AC/DC, Stephen King's favorite band. AC/DC's album, Who Made Who, was released as the Maximum Overdrive soundtrack. It includes the best-selling singles "Who Made Who", "You Shook Me All Night Long", and "Hells Bells".

The film was nominated for two Golden Raspberry Awards including Worst Director for Stephen King and Worst Actor for Emilio Estevez in 1987, but both lost against Prince for Under the Cherry Moon. In 1988, Maximum Overdrive was nominated for "Best Film" at The International Fantasy Film Awards. King himself described the film as a "moron movie" and stated his intention to never direct again soon after. In a 2002 interview with Tony Magistrale for the book Hollywood's Stephen King, King stated that he was "coked out of [his] mind all through its production, and [he] really didn't know what [he] was doing." In spite of this, King stated in the same interview that he "learned a lot from the experience," and would "like to try directing again sometime."
Posted by MrGarabaldi at 6:00 AM