I have 2 Pair of Jungle Boots upstairs in my bonus room and they are a legacy of the Vietnam War, they have a metal plate in the soles of the feet to protect the wearer against punji sticks penetrating the soles and and sticking the wearer. 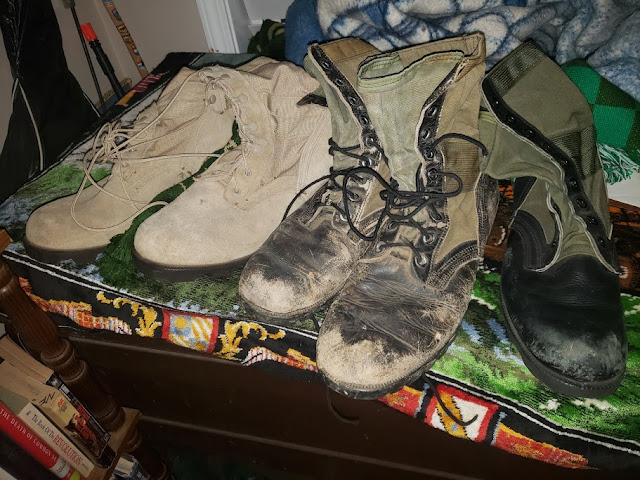 The center are my original Jungle boots, I used to have a killer "spit" shine on them back in Germany but when we deployed , the "spit"shine went away. the one on the right are the later version, it has the new style soles.  The Desert boots we got after the war was over along with the Choco chip Uniforms.  We were recognized from Germany, we fought the war in Green uniforms, Green tanks, Green equipment. The Stateside units were Tan.
I wore them in the Gulf through the entire war and the problem was the metal plate did transmit heat from the sand and the holes that were in the sides to allow drainage of water did allow sand to enter.  Our desert boots we were issued were patterned after our "jungle" boots but were "brown". 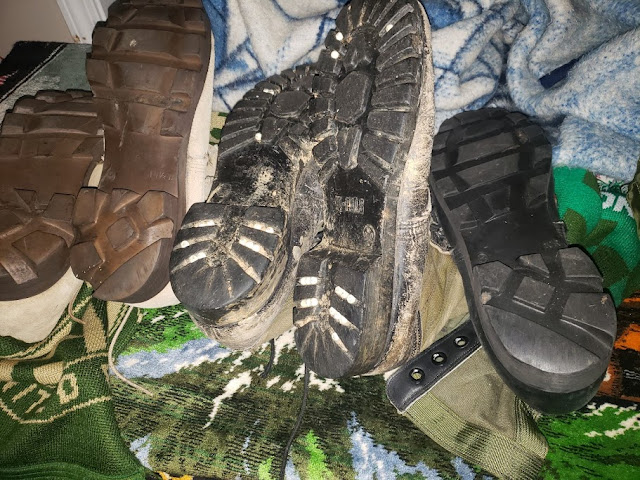 I was interested in the simple but effective Punji Sticks used in the Vietnam War,  It is a lesson on what a simple thing can be used as an effective weapon against an opponent.


Aside from being the longest and most costly conflict in modern history, the Vietnam war was the most horrific campaign in American history due to the tremendous psychological damaged caused to the American soldier.
The scars that remain after years exposed to the brutality of the war and the death of American innocence undermine any notion that the war was one of righteous purpose when one truly reflects upon that war. It was not a defeat of numbers but of the spirit.

The North Vietnamese and Viet Cong forces accomplished their goal of creating psychological terror in many hideous ways, but the most gruesome of all was their application of the traditional traps used by their ancestors. The Viet Cong’s insidious ingenuity in planting booby traps kept the American soldier in a state of extreme anxiety at all times. The most common of these traps was the punji stick.  Punji sticks were made either from sharpened bamboo, with the points hardened by fire, or nails, which were then inserted through wooden boards. They were then placed, often quite densely, in areas of pre-arranged attack such as fields where helicopters were bound to drop attacking infantry. The North Vietnamese would then open fire from the jungle treeline, distracting the US soldiers from the danger lurking right under their feet. Punji stake pit exhibit, from the National Museum of the Marine Corps
A wound from the simpler punji stick trap was almost never fatal but was instead designed to take soldiers out of the fight while increasing the battle fatigue of those left on the field. To increase their potency, the Viet Cong would smear punji sticks with either poison or their own crap thus raising the likelihood of an infection taking hold in the wound much greater.
In a surgical report made by the US military in 1967, it was surmised that for every three weeks of combat three hundred and twenty-four men would be put in the hospital from punji stick wounds; all would be treated for infections and some of the infections were extremely resistant to the antibiotics of the times. 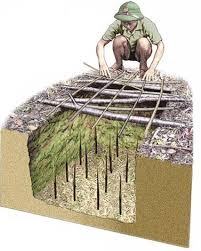 The categories of punji traps can be divided between those that required a trip wire to be set off and those that did not.
Of those that did not the most common was the side-closing punji trap. This involved two spiked boards in a small hole which were then camouflaged. The other was the spike board, which, somewhat like a seesaw, was constructed so that when a man stepped on one side the other would spring up, hitting him in the torso. Both were very cheap to construct and very common. A Trap Door at Cu Chi Tunnels
Two others were the Venus fly trap and the bear trap. A Venus fly punji trap was a box that could be sunk into rice paddies till submerged. Barbs would be placed at a downward angle to make it very difficult and painful to get out once stuck.

Consists of a rectangular frame work with overlapping barbs emplaced in a pit, on trails or a rice paddy. Can be made from a metal container which is sunk into the ground until the top is flush and then covered with grass or leaf camouflage. The barbs inflict injury especially when the victim attempts to withdraw his leg out of the trap.

A bear trap was two spiked slats on a tracking board that when triggered would slap together with a huge rubber band. Between the spiked slats was placed a rod of bamboo that when removed would allow the rubber band to slap the slats together and impale its victim.

Tripwire punji traps were more elaborate in nature and much harder to construct. They were the door, arrow, mace, tiger, and whip traps.  Like their names suggest, a door trap would swing down from the rafters into the frame by tripwire, a rod of bamboo would fire an arrow by tripwire, a giant mud-spiked Morningstar mace would sweep the jungle path when triggered by tripwire, and a roof of downward spikes would fall when tripped.

Watching this video gave me the "Hebejebe's" knowing this is what My dad and many others dealt with in Vietnam.

The most infamous, the whip trap, was a stick of green bamboo pulled taut and when released would fling back with a spiked end. It has been seen a few times in movies such as Rambo: First Blood and Conan the Barbarian.

Still other traps using bamboo were used. The most elaborate of all was the spike pit. Large in construction, when a man or group of men stepped on the camouflaged board it would teeter then drop them onto the spikes below. Although it was rare, extra long punji sticks were constructed to take out helicopters when they came close to high grass. Every once in awhile they would succeed.
With such debilitating effects that these traps had on soldiers, it is no wonder why so many returned from the war anxious and scarred. War was bad enough fighting those you can see, but the jungle and the risk of death or injury at every turn certainly created an immediate and lasting effect.
I do know that My dad had expressed an interest in going back to Vietnam to see what has changed and what has stayed the same.  But with his health I don't know if he will ever go.  he is the last survivor of his platoon that is still alive, Agent Orange ravaged his unit, apparently going around the jungle while the chemical from DuPont was being utilized has certain long term effects on peoples lungs.  He has expressed an interest in going back to Cu Chi to see the tunnels again, My Dad was one of those that did venture into the tunnels to search for the elusive VC's, intel and whatever else that they could find.   He could have gone on my flight benefits, but this Kung-flu probably derailed any attempt of my Dad ever going.
Posted by MrGarabaldi at 11:42 PM