The Last Combat Death of the Cold War.

I ran across this on Farcebook and I remembered the incident and it infuriated me.  I was at North Georgia College and I heard about the Soviets shooting an American Officer then Soviets being Soviets, trying to blame the Americans.  I still remember the KAL 007 where the Soviets shot down the Korean jetliner then said that it was an "CIA plane" and we had proof that from intercepts that the Soviets knew that the plane was a civilian plane and the Soviets were being Soviets and duplicitous.   I knew about the "SMLM" missions because I lived in Germany in the 1970's and the Soviets had their "SMLM" counterpart delegation in "Bunde" in the British sector and the American Sector they had their Main office in Karlsruhe and a satellite location in Frankfurt. I know because I saw a guy in a Soviet Officer uniform in the Stars and Stripes in Frankfurt ( Soviets delegations had full access to the PX system, this is part of the reason that getting assigned to the Delegation was a prime assignment so they could send western goods back to the motherland for barter for other things) and he said "hi" to me and my being polite responded in kind as I was buying another book.  I asked my dad who was "El-Cid" in Frankfurt at that time about that and he explained what  that guy was and his purpose was and that he was a legal "spy" for the Soviet Military. 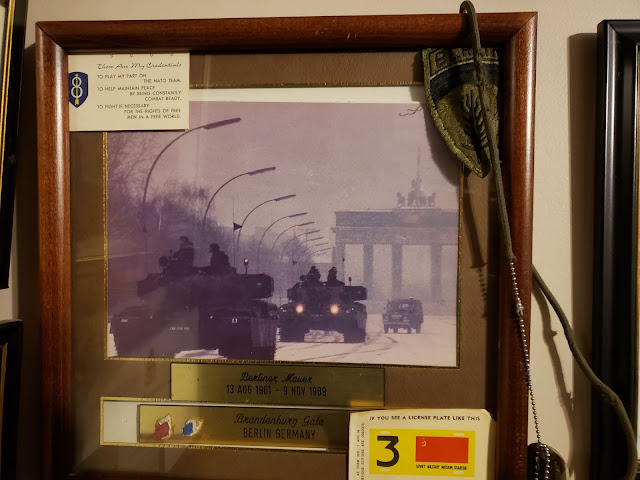 That Card on the lower right of the Pic, we all got them when we got "in Country" we were supposed to call a number if we saw this vehicle traveling around in Germany.  Especially near any maneuver or Training areas.
When I returned to Germany in 1986 as a GI and joined my unit at the Big Red One at Cooke Barracks, we immediately started border missions inside the (1K Zone) under the auspices of 2ACR who had the authority to run the area immediately behind the border between East Germany/West Germany and Czechoslovakia.  It was good duty, It was sobering to see the little M151 jeep loaded with a footlocker with claymore mines, LAAW rockets, extra ammo, grenades and so forth.  2ACR were Speedbumps for GSFG if they crossed the Fulda Gap and they knew it and we were to buy time for the other troops to get out of garrison to stop the Soviets before they got to the Rhine.  During this tour I spent 90 days in Wobeck by Helmstedt.  Then I spend the rest of my time at Stuttgart until 1991 with a detour in the Gulf. 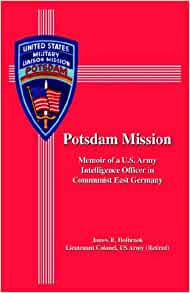 14 years ago I bought a copy of a book and talked to the author, his name is James Holbrooke and Here is the Potsdam Missionslink on Amazon
It was interesting reading about the adventures on "that side of the fence and the "souped up Bronco's they used"

I clipped this story off Farcebook and it is a worthy story of remembrance. 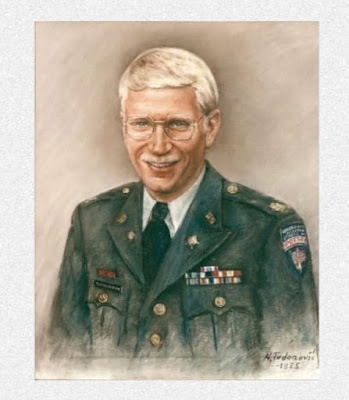 Fort Huachuca, AZ. - When Major "Nick" Nicholson and his driver, Staff Sergeant Jessie Schatz headed out to patrol an area in Ludwigslust, East Germany on the morning of March 24, 1985, there was nothing unusual about their mission. They were in uniform, driving a vehicle marked with the distinctive plates of the U.S. Military Liaison Mission (USMLM) and they were unarmed. As members of this unique organization, the two men were basically licensed spies, authorized by a 1947 treaty with the Soviet Union which allowed all parties of the occupation to maintain communications and exchange intelligence in the occupied zones of East and West Germany. Originally, the agreement was designed to coordinate efforts and keep tabs on German disarmament and demilitarization. As the Cold War progressed, however, the liaison teams remained in place, keeping tabs on each other rather than the Germans. The Soviets had their own liaison mission which operated on the same principles inside the American, British, and French zones of occupation.
On this particular day, however, something went very wrong. The 2-man team was following a convoy of Soviet tanks returning from target practice -- a very typical activity for a USMLM team. At some point, the two Americans left the convoy and headed for a tank shed off the main road. Seeing no guards, they drove to within 200 yards of the shed. Major Nicholson left the vehicle to take some photos, leaving SSG Schatz with the vehicle to provide security. After a few minutes, Nicholson got back in and they drove closer, this time to within 10 yards. With the driver watching, he got back out and approached the shed to look in a window. That was when Schatz noticed a young Soviet sentry emerging from the woods. Nicholson was turning to get back in his vehicle when the first shot rang out, narrowly missing his driver's head. The Soviet sentry, a young sergeant named Aleksandr Ryabtsev, aimed again and fired two more shots.
One of them hit the major, and dropped him. Rising to an elbow, he shouted: "Jessie, I've been shot!" Then he collapsed. Schatz reached for his first aid kit, showing the Red Cross emblem to the sentry, and attempted to assist his teammate. The sentry kept the AK-47 trained on Schatz, however, trapping him in the vehicle for over an hour. By the time anyone bothered to check for a pulse, Major Nicholson didn't have one. The Soviets refused to accept any blame, changing their story regularly and contradicting themselves repeatedly. In the final analysis by the U.S. Army investigators, Nick's death was "officially condoned, if not directly ordered" by the Soviet leadership. 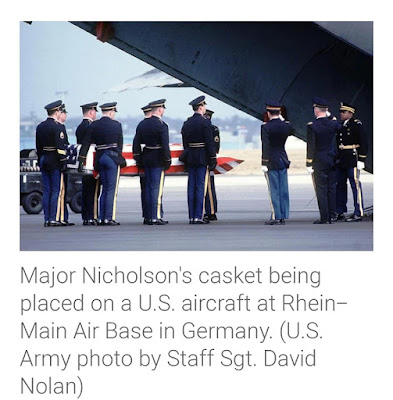 This incident caused immediate political furor, with both sides blaming the other. Major Nicholson's body was eventually released, and he was buried with full military honors in Arlington National Cemetery. All 13 of his USMLM team members were present at his funeral. He was posthumously awarded the Legion of Merit and the Purple Heart, and in an unprecedented move, promoted to Lieutenant Colonel upon approval of the President. Three years later, the Soviet Union expressed "regret" over Nicholson's death. Ironically, by the time LTC Nicholson was inducted into the MI Hall of Fame in June 1991, the two divided sides of Germany had been reunited (Oct 3, 1990), and six months after his induction, the Soviet Union would officially be dissolved (Dec 26, 1991). The veterans of the Cold War, America's longest war, deserve to be recognized, honored, and remembered. LTC Arthur D. "Nick" Nicholson, Jr: we thank you for your service. 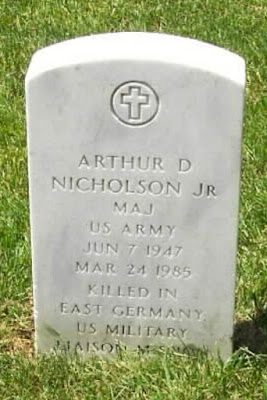