20 Reasons Objectionist and Libertarians should vote for Donald Trump.

I shamelessly *nicked* this off my Farcebook feed this morning, I went to do a Boy Scout Shooting event with them yesterday and sight in my new rifle, what an adventure it was yesterday and a story for a future blogpost, but not today.

This is from the "SavvyStreet.com and it was very good 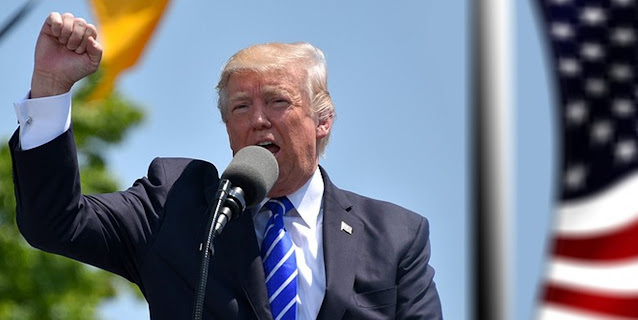 I became a tepid Trump supporter early in the 2016 campaign. He did not seem ideological on issues like climate change, energy exploration and fracking, “good” racial quotas, and “reining in” Wall Street—to mention a few. The right ideology is best; the wrong ideology is worst. A businessman unabashedly proud of his wealth, spending guiltlessly, enthusiastically heterosexual, boastful about American exceptionalism, apparently uninterested or excited about identity politics, and snapping the whip at the mainstream media (MSM) seemed good enough for me. What sold me was when the left MSM abandoned all standards of journalism, or even decency, to destroy him. Obviously it was not for his playboy-ish private life. The media pines for neo-Marxist ideology. They use any means, including unjustified personal attacks to advance it. If Trump horrified them, there was perhaps even more potential than I saw.

The Mt. Rushmore speech alone shows his understanding of America’s enemies has progressed and should convince freedom lovers of his value. But actions speak louder than words.

Indeed, there was. Through a campaign about as civil as an Indian gantlet, which made me want to hide in a hole, Donald Trump remained energetic, positive, and incredibly managed to take the media attacks for what they were worth—and solve the problem by … tweeting. When he claimed his stunning upset victory, and I saw the media reaction, I became positively enthusiastic. I published Donald Trump and His Enemies: How the Media Put Trump in Office.

Fast-forwarding, now, as the next four years wore on I published an informal series on Facebook called “The ‘What-Is-Worth-to-You?’ Department.” It featured each action, each comment, of the president that made me even happier that I voted for him. An example not given below, but in the same “Department,” was his speech on July 4, 2020, at Mt. Rushmore. That alone shows his understanding of America’s enemies has progressed and should convince freedom lovers of his value. But actions speak louder than words.

So, here are the 20 reasons, based on actions, why objectivists and libertarians should vote for Donald Trump in 2020:

You may not admire him like I do, but he is far and away the lesser evil from an objectivist or libertarian lens.

I kept to the positive surprises (for me) in this list. But there have been many, many more. But the list scarcely touches on the point that initially got me interested in Trump. It is expressed in the phrase “Donald Trump and His Enemies.” You look now at the rapidly approaching election and the marquee of adversaries, featuring Joe Biden and Kamala Harris. But look at those others who attack the President, on what grounds, and the level of discourse they permit themselves. It is as though they all have Tourette Syndrome in addition to Trump Derangement Disorder. Increasingly, I believe our President—born and bred in the rough-and-tumble, two-fisted, in-your-face New York real-estate world—has in his own way a kind of dignity, courage, and self-confidence. Can you imagine? A rich, white man … unapologetically patriotic?

Donald Trump: he has his nerve!