Some more goings on at Casa de Garabaldi

I was handling my main AR before I lost it in a Kayak accident and I noticed that it was kinda heavy, My brother calls it a "Musket", it is full length, she has the 20" barrel and has gone through several adaption before Settled on a final Version.  I decided to built an M4gery as they are called.  I had ordered an "Angry Joe" stripped lower from Palmetto State Armory as a lark back in February and then Kung-Flu hit and I didn't get the lower until July I was handling my "Main AR" as I call it and even though it is no Frills It is pretty heavy and I decided to build a lighter rifle and my "M4gery" was born.   You can read and see pics here of the lower. 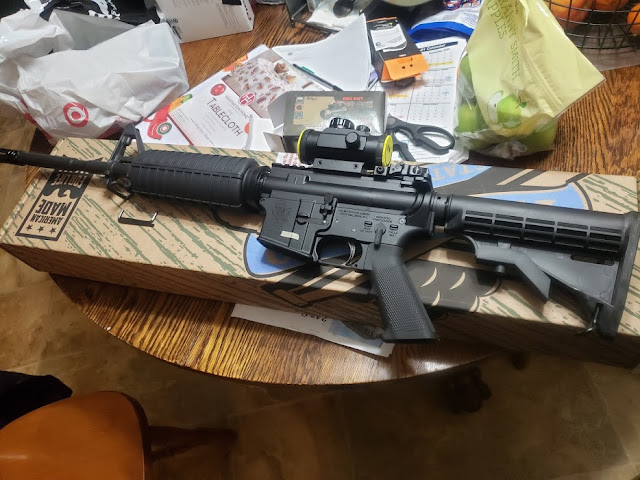 Well I got the Upper in finally along with the  optics, and I started building the Rifle.   The Optics I got from an outfit called "Overlord Tactical" and they were $60 and they are Red and Green Dot.  The Flip down rear sight I got off Amazon.    I was looking for a sling for the rifle and didn't see one and figured I would have to order one off Amazon, I had asked my friend  Mack and everyone's guru of Gunstuff and purveyor of gun knowledge and Hooter's calendar's what kind of sling I should get, I had mentioned that I wanted something simple, not cutting edge tacticool. and he suggested the Magpul MS-1, a good basic high quality sling.  But unfortunately Amazon was out of stock, and I figured I would wait until the next day before ordering something else.  Well I decided to go by the Army/Navy store in Forest Park where I had picked up the manual a month before in remembrance of my departed Garand in that nasty Kayak accident...Still brings a tear to me eye lemme tell you*sniff*  Government ought to outlaw durn kayaks....hazards those things are....Hazards..lemme tell you..and canoes are worse...weapons of mass destructions....Pardon me for going off track....Well I decided to rummage around and lo and behold I found an M60 sling, Sweet! so I quickly purchased that and off I went. 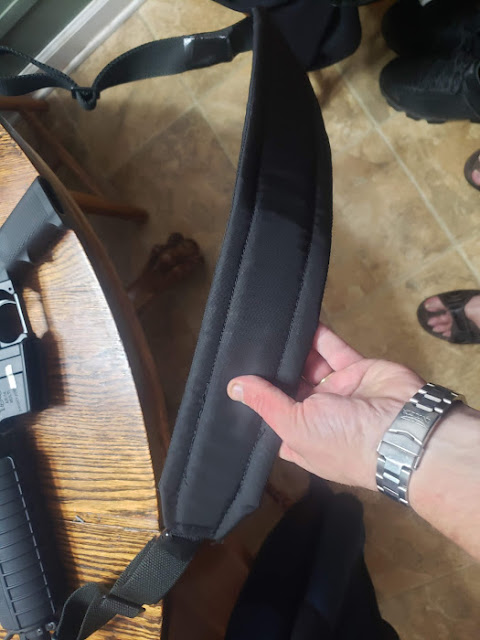 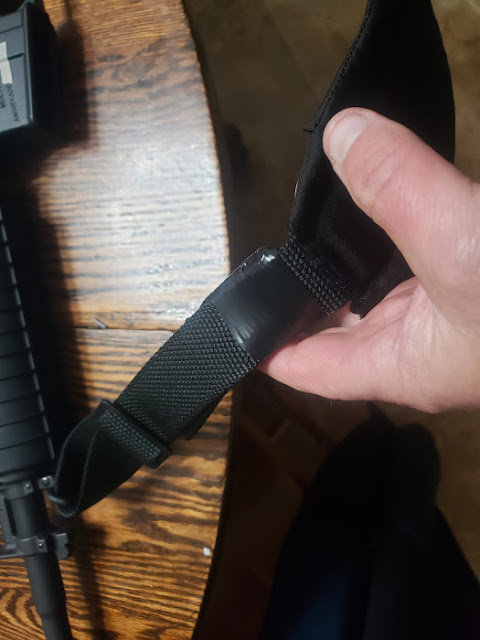 Yep electrical tape, wrapped several times and put it slightly under tension as you wrapped it so less likelihood of it unraveling. 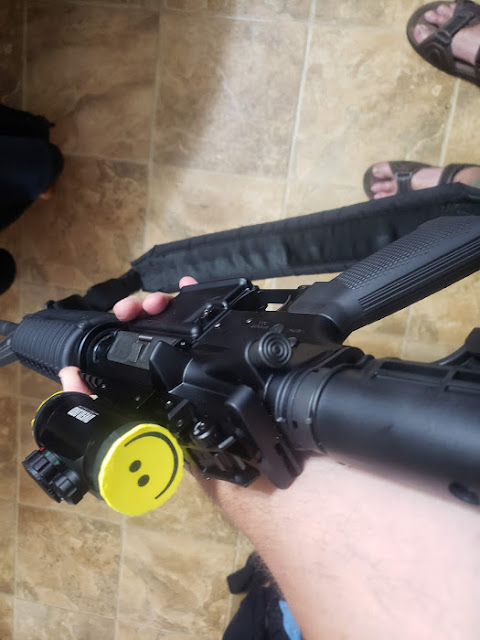 "Mr Smiley"  I put smiley faces on the scope covers on all my rifles. My Humor is slightly warped.
Now I gotta get ready for my next kayak trip........
On a slightly different note, I went ahead and did early voting, wanted to get it over with, I wanted to make sure that my vote counted.  Even though my county is "blue", there is a lot of excitement for President Trump, and none for Biden, I have seen 2 Biden signs in my county and a crap load of Trump signs.  As far as I know, the same people who voted for him in 2016 are voting for him again, plus the people that were unsure about him in 2016 now have seen what he has done and the promises he has kept  will vote for him now. Plus he has a lot of Latino and Black support unlike before. 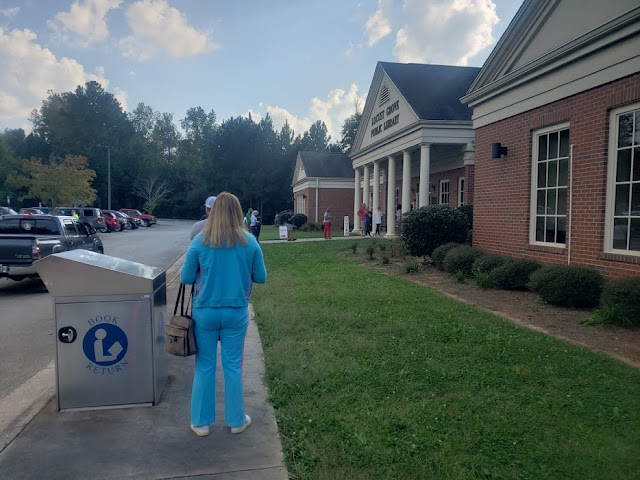 The line wasn't too bad, took me about 40 minutes and that was in the late afternoon.  Of course there were hangups in Fulton, Dekalb and Gwinnett counties...and the activist are all up in arms.....screaming voter suppression........Slow your roll sport......what political party run those counties.....?    I'll wait....while the Jeopardy theme music plays...you betcha......democrats......blame your own.....y'all keep electing incompetents......you get incompetents.......Well anyway. 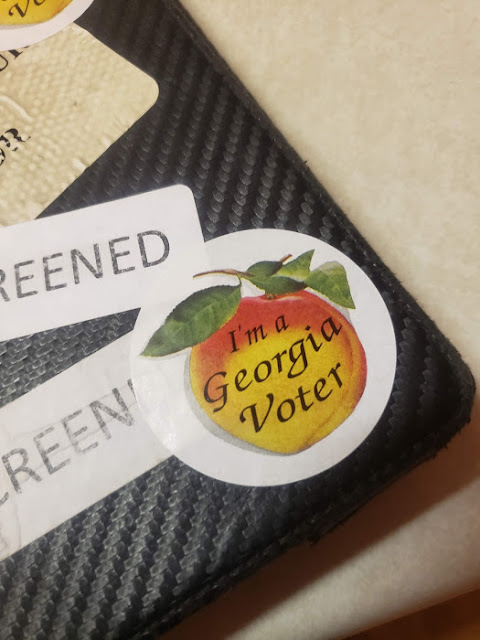 I voted.
I wanted to do my part to make sure that President Trump wins.   Now if by some fluke Biden wins because there has been enough fraud and cheating for them to pull it off....here is my forecast for the new President-elect... 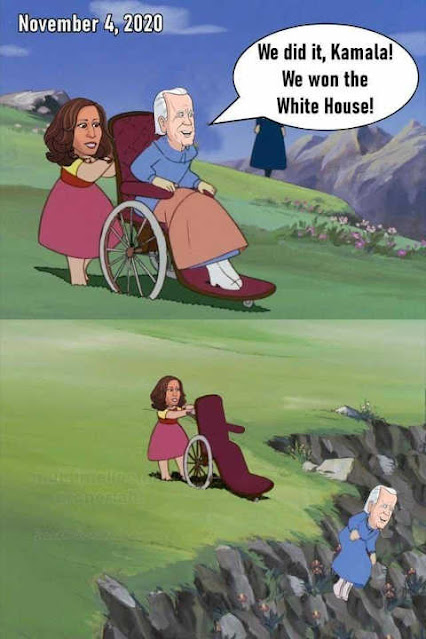 Pelosi is already setting up a 25th amendment commission.....it ain't for Trump...;It is for Biden.

Posted by MrGarabaldi at 5:12 PM