The Soviet Rifle Corp from WWII

I ran across this article surfing the web and it was a good explanation of the Soviet Rifle Corp, It would have been a good addition when I was doing my assorted blog posting for all my Red Storm Rising post that I did several years ago and I enjoyed immensely.  The Soviets didn't change their structure much since WWII.   It worked well to defeat the Fascistsi invaders and they figured it would serve the Rodina well since.  They have upgraded the structure since the fall of the Soviet Union, but I don't know of the extent, I am no longer in the loop. 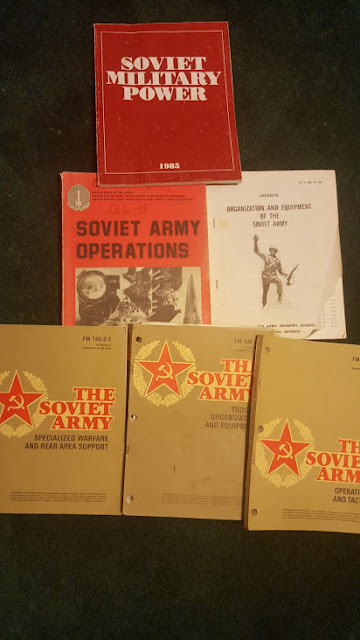 From my stash of Manuals I have.

For many in the Wehrmacht, the Red Army was for the entire war a poorly-understood force. German intelligence had some idea of how large the Red Army was at various points during the war, but German misconceptions about the Soviet forces have endured in the popular imagination, lending vague notions of "red hordes" and overwhelming numerical superiority.

Written by Bill Wilson. If you have questions or comments on this article, please contact Bill Wilson at: betio_tarawa@yahoo.com.About the author:Bill Wilson is a military history enthusiast whose interest is the organization of the military forces of the Second World War. He served in the U.S. Army in Germany during the Cold War and currently resides in Europe.