I figured it would scar the alphabet boys if they come busting in and hearing a song about people standing for their beliefs and willing to fight for them no matter the cost, Good Music  unlike that crap they listen to now.  What can I say, My humor is warped....just a bit. Next week will be "Yellow Flicker Beat" by Lord, This one was suggested by a reader "Glypto Dropem"  Now that should really cause some psych evals., hehehe, some poor ATF guy trying to explain the attraction to his mother because he is imaging himself as The savior of the American way rather than working for an agency that have the initials of a convenience store.  I was thinking of this song would be good for one of the alphabet agencies knocking and we have the attitude of "IronMan" because we ain't gonna answer that door.  They can kick it in and start "the Dance"

I am Rolling with "Ironman because "Gerry" one of my readers suggested it. 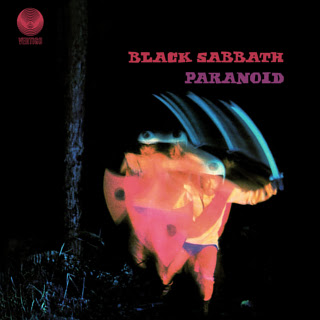 "Iron Man" is a song written and performed by the English heavy metal band Black Sabbath, released on their 1970 album Paranoid. The lyrics tell the story of a man who time travels into the future and sees the apocalypse. In the process of returning to the present he is turned into steel by a magnetic field, and his attempts to warn the public are ignored and mocked. Feeling shunned and alone, Iron Man plans his revenge on mankind, causing the apocalypse seen in his vision.

Upon hearing the main guitar riff for the first time, vocalist Ozzy Osbourne remarked that it sounded "like a big iron bloke walking about". The title became "Iron Man", with Geezer Butler writing the lyrics around the title. Osbourne sang behind a metal fan to get the sound effect in its first line, 'I am Iron Man!'. Despite the title, the song has no connection to the Marvel Comics character of the same name, although it was used in the end credits of the 2008 movie Iron Man, and the trailer for the 2010 sequel, Iron Man 2. The character Tony Stark, alter-ego of Iron Man, also wears a Black Sabbath t-shirt in the 2012 film The Avengers.