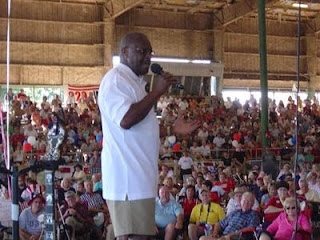 I have been watching the news about the sexual harassment scandals hitting Herman Cain and I have several thoughts come to mind:  First off with the LSM, it is funny that it took over a year for the Edwards love child to finally make the news after a trashy tabloid was pushing the story for over a year before it was even mentioned by the so called main stream media.  It is funny that they can't find Obunglers college transcript or information about his background...but somehow information that Herman Cain is guilty of sexual harassment has gone viral and has spread soo fast..  There is scuttlebutt that Perry's camp and establishment GOP is behind some of the leaks.  If this is the case, it is despicable to scoop to such a level, it is comparible to democraps doing this.  Herman Cain is being "Borked"    The Liberals from politico broke this story, a conservative black man has strayed from the democrat plantation....gotta punish him.
The democraps cannot let a usurper challenge the Obamamessiah, they want Romney to go against him in 2012, Obungler will win.  Now if Herman Cain challenges him in the Elections, Obungler will lose.  They can't play the Race card on Herman Cain, but they can use it on the others.  I believe that it is the establishment GOP and the Lefties that are after him.  Herman Cain is a "Tea Party" candidate not establishment GOP.
Posted by MrGarabaldi at 7:51 PM