A Boeing 767 from Newark, N.J., to Poland with 230 people on board makes a crash landing in Warsaw after its landing gear fails, sliding on the runway and catching fire, but no one is injured.

WARSAW, Poland – A Boeing 767 flying from New Jersey to Poland with 230 people onboard made an emergency crash landing at Warsaw's airport on Tuesday after an apparent problem with the aircraft's landing gear.

Leszek Chorzewski, a spokesman for LOT, the Polish airline that operated the flight, said none of the passengers was injured. The plane landed on its belly without its wheels.

The plane, which dumped fuel before making an emergency landing, circled over Warsaw's Chopin Airport for more than an hour while operators attempted to get its landing gear to function.

The airport has been closed until 8 a.m. Wednesday. 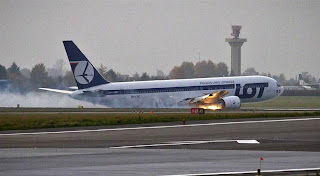