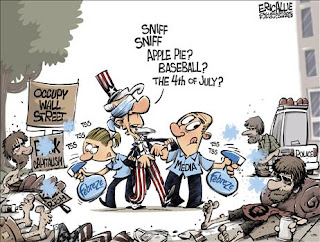 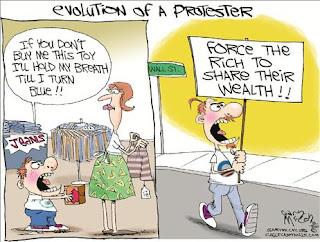 As the reports from New York (and other Occupy sites) gets worse, it continues to highlight the differences between the Tea Party protests and what we are seeing now.

I continue to make the point that in spite of all the accusations of extremism and racism directed at the Tea Party from the left, their track record is virtually spotless when it comes to incidents of racism, violence and arrests. On the other hand, these Occupy protests continue to degenerate, and the arrests pile up. They have also been marked by expressions of anti-Semitism. These people even have the effrontery to call themselves "the 99%-ers" as they demonize wealthy people who have made their fortunes honestly and through their own intelligence, initiative, creativity and hard work. They don't represent 99% of anything, but they do represent a general decline in American values. In many ways, they represent just what has gone wrong in our educational system from K through PHD.

Is there a generational aspect to the comparsions and contrasts between the two? Pretty much so, I would argue. The Tea Party folks tend to be older folks who have worked, paid taxes, and contributed to society. The Occupy forces tend to be younger folks who seem to think that government needs to give them stuff-lots of stuff. Their older supporters tend to be left-wing academics. failed Marxists, and of course, the thuggish unions. One thing I have noted is that you don't see or hear much about Obama in the Occupy protests. They don't much like capitalism, but they are strangely silent on that thing called Solyndra, which should be a poster child for crony capitalism run amok. Suffice to say that the overwhelming majority of these people will be voting for Obama and the Democrats come next November. That's why the Obamas, Pelosis and the other Democrats will not criticize them, which puts themselves in an embarrassing situation.

I also think that the Occupy movement is partially a product of our failed educational system. These young people have been brainwashed by their educators at the secondary and university level that America is a severely flawed, racist society, and that capitalism is unfair to those who don't succeed. Never mind that socialism and especially communism have proven themselves to be unfair and unsuccessful. These young people have been led to believe that they are entitled to something which their parents and grandparents (not to mention the Tea-partiers) worked their buts off to earn- a job, good wages, a home, health care, higher education and a comfortable retirement.

If the Occupy movements continue right up to next November, so much the better. It will give the voters a crystal-clear contrast between the two roads which this country would follow. Indeed, that is the choice we will be making in the next election.
Posted by MrGarabaldi at 11:33 PM