Texas will not punish handgun instructor. 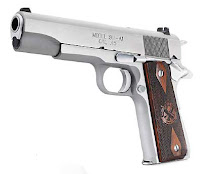 Texas Won’t Punish Anti-Muslim Handgun Instructor
By Todd Starnes
Case closed.
The Texas Dept. of Public Safety will not revoke or suspend the license of a handgun instructor who ran a radio ad telling Muslims and non-Christian Arabs that he would not teach them how to handle a firearm.
The DPS statement said Crockett Keller affirmed that he would not refuse handgun instruction “to anyone based on national origin, race or religion.”
The state agency declined to provide any further comment.
Keller gained national attention for the ad that ran on a country music station about 100 miles west of Austin.
“I have no regrets,” he said. “I’m not a mean individual – not to say that occasionally I’ll get a little bit saucy or crude with my language.”
Nevertheless, he said he considers Muslims “our enemy” and he said they aren’t the only ones not welcomed at his handgun class.
“If you are a socialist liberal and/or voted for the current campaigner-in-chef, please do not take this class,” he says in the ad that went viral on YouTube. “You’ve already proven that you cannot make a knowledgeable and prudent decision as required under law.”
Crockett ended his ad with an attack on Muslims.
“Also, if you are a non-Christian Arab or Muslim, I will not teach you this class,” he says. “Once again, with no shame, I am Crockett Keller.”
The Texas Council on American-Islamic Relations said the state’s decision “sounded funny.”
Keller’s ad – calling it ugly rhetoric.
“I thought he meant it,” Texas CAIR executive director Mustafaa Carroll told Fox News. “There’s a lot of hateful rhetoric in the atmosphere in America these days.”
Carroll said American Muslims are good citizens, law abiding and educated.
“Most of the immigrants I know came here to escape oppression in their own lands and many of them have acclimated quite nicely,” he said.
He said many of the Muslims who contacted him just brushed off Keller’s statements.
“We hear so much of it,” he said. “People find it distasteful. When they hear things like that they just write it off to another crack pot.”
Posted by MrGarabaldi at 3:42 PM

Email ThisBlogThis!Share to TwitterShare to FacebookShare to Pinterest
Labels: islam, religion of peace