I read this on Sultan 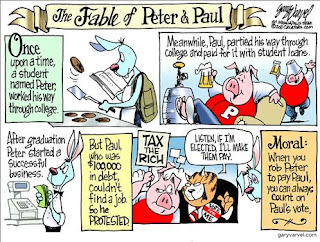 The big lie of Occupy Wall Street begins with its name, it isn't occupying Wall Street, it's occupying the resources of a city with a budget crisis on its hands.

Wall Street has been locked down since after September 11 and the Zuccotti Park encampment and its associated barricades isn't doing much to impact the lives of the brokers and financial analysts the idiots in their best protest gear are braying about. The people who are being impacted are the small businesses adjacent to the protesters who are experiencing a return of the post 9/11 lockdown that wiped out so many downtown businesses.

That means the kid in the projects who needs the police to be there instead of macing white guys from Portland who think that braiding their hair makes them just like Bob Marley. It also means patients who need medical services from city hospitals whose budgets are already being cut, and will be cut further because of the unexpected expenses for the city associated with having thousands of idiots decided that a park in the middle of the city is their ideal location for a campground.

Because of OWS, public schools, public libraries, public hospitals, roads and homeless shelters will have money. That will have a direct impact on the lives of actual underprivileged people.

And this isn't just happening in New York City, OWS have targeted urban areas with municipal budget deficits, tying up resources and diverting funding from the most vulnerable members of society. They have done this in Oakland, whose budget is already made out of strings and wires, and which isn't a world financial center.

Why do this in Oakland? Because they could. For the same reason that they trashed a grocery store and two banks. The people paying the price for that will be the customers and employees, and it will be the people of Oakland whose will lose services to cover the cost of Occupy Oakland. A week of Occupy Oakland clashes cost a million dollars. That million dollars will not be coming out of the banks.

The same thing is true everywhere. Wall Street will not be footing the bill for Occupy Wall Street, the people who actually live in the city will be the ones left with the tab when the parasitic trash that washed in here on a haze of pot smoke and greasy backpacks go back to wherever the hell they came from.

The Obama Administration, whose allies are behind the protests and which is using it as the kickoff to an election campaign in order to reach out to younger voters, will not be footing the bill either. It's the people who live in the city, the rich, the poor and the middle-class who will pay for it.

For the cost of Occupy Wall Street, dozens of libraries could have been built, hundreds of classes could have been added to public schools and who knows how many lives could have been saved in a city that has already slashed its fire department to the bone. Instead all that money is being poured down the gullet of upper class brats with useless college degrees who want to stage their own temper tantrum at the behest of the professional political activists without giving a damn about the cost to real people.

Around 4 million dollars for police overtime in New York City alone. The various assorted other costs associated with a massive homeless encampment that's being provided with electricity and trash pickup can't even be calculated. Not to mention processing some a thousand or so of the bozos through the system and then handling their lawsuits afterwards.

In Boston, police overtime is over the 2 million mark. In Atlanta costs are approaching half a million. In Charlotte, the tab for the police alone is over a hundred thousand dollars. In Minneapolis it's over 200,000 dollars. Occupy Seattle, 105,000. Occupy Denver is approaching the half a million mark. A cop at Occupy Denver told the group that each added police car following them was another 5,000 out of the city budget.

Want a real joke? Try Occupy Detroit, a movement to occupy a city which is already a disaster area and facing ruin, chanting against the last few businesses that are keeping the place alive. Maybe if the banks pull out of Detroit, then the people there will be better off.

Who's to blame for this whole mess? The lion's share of the blame belongs to the media which turned a bunch of pretentious idiots standing around with fake cardboard signs into a mass movement with constant coverage and which has served as their press outlet, rabidly pouncing on any politician even thinking about giving the bozos the boot.

The media co-created OWS and they own it. There is no pretense of objectivity when reporting on what's going on, from the pretense that they represent some kind of oppressed average joe down to promoting the absurd and bizarre lie that Bank of America dropped its card fee because of the protesters, rather than because of a massive exodus of customers.

And much of it belongs to fainthearted mayors who failed to act when they should. Giuliani would have never tolerated OWS setting up shop blocks from City Hall. And Koch, no matter what he says, wouldn't have put up with it for very long either. But Bloomberg has sent so many mixed messages that he might as well be texting his speeches. Had New York City taken the lead, the whole mess would have been over weeks ago. Instead Zuccotti Park became a warm nest for the parasites and their massive campout.

It is anyone's guess how many sexual assaults happened because Bloomberg was too gutless to take on ACORN and the media, but even one is too many. And during the next budget debate, OWS will be blamed without assessing the responsibility of city officials to enforce the law.

It's time to end the occupation and end it now. OWS is not peaceful. Oakland and Denver proved that. It does not have a right to permanently seize and colonize public spaces that are there for the benefit of all people. It does not have a right to hold a city hostage so its entitled brats can play revolutionary and boost the election campaign of a politician responsible for the economic mess.

In 2004, when the Trotskyist Anti-War trash of ANSWER and the Islamist weasels of the National Council of Arab Americans wanted to trash Central Park's Great Lawn in order to protest against the Republican National Convention, the city firmly said, "No". The trash and the weasels sued the city and the city unfortunately gave in doling thousands of dollars to the groups. That set a bad precedent which is haunting us now.

Had the Occupy brats decided they wanted to set up shop in Central Park, the damage to one of the country's wonders would be horrifying. Zuccotti Park is no great loss, but the cowardice of public officials in the face of professional agitators is. The job of the mayor is to represent New Yorkers, not ACORN and the Daily News. When even a leftist nerd like Congressman Nadler has called for cracking down on the abuse behavior of the OWS parasites, it's obviously past time to act.

Giuliani shut down the homeless encampments and the sight of a massive encampment back in the heart of the city is a disgrace. It is a disgrace created by the chicanery of the media, the cowardice of elected officials and the ruthless cunning of a class of professional activists determined to ram through their Community Organizer in Chief by any means necessary.

Every day that OWS continues to operate is another day that the city is under occupation, that its budget is being drained by political parasites with no shame and no red lines. It's time to end the occupation and send the parasites back where they came from
Posted by MrGarabaldi at 11:54 PM