This song screams "80's"  and it was sung by the soundtrack king for the 80's "Kenny Loggins" who did other soundtracks during this decade. decade, Loggins recorded so many successful songs for film soundtracks that he was referred to as, "King of the Movie Soundtrack". It began with "I'm Alright" from Caddyshack. Hits followed with "Footloose" and "I'm Free (Heaven Helps the Man)" from Footloose; "Meet Me Halfway" from Over the Top; and "Danger Zone" and "Playing With the Boys" from Top Gun. Loggins also performed "Nobody's Fool" from the film Caddyshack II. He also performed as a member of USA for Africa on the famine-relief fundraising single "We Are the World", which led to an appearance performing "Footloose" at the Philadelphia leg of the July 13, 1985 Live Aid famine relief dual-venue charity concert and global television broadcast.  The U.S. Navy got a lot of free publicity on this movie, I heard of recruiters hanging around theaters and picking up prospects after they walked out from seeing this movie.  The U.S. Army tried with the Apache Helicopter and Nickolaus Cage with mixed results and I think the Air Force tried with "Red Flag" or something like that.  The U.S. Marines had HeartBreak Ridge and it did well and gave the Corp a good publicity involving the mission to Grenada.
This scene with the "AK-47 as the preferred weapon of our adversary and it makes a distinctive sound when fired at you." is a classic especially with us military guys.
Now back to "Top Gun", "Danger Zone" is a song, with music composed by Giorgio Moroder and lyrics written by Tom Whitlock, which American singer-songwriter Kenny Loggins recorded and released in 1986. The song appeared on the soundtrack to the 1986 American motion picture Top Gun. 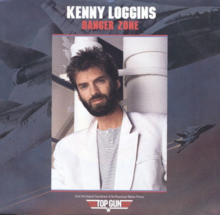 The band Toto were originally intended to perform the track but legal conflicts between the producers of Top Gun and the band's lawyers prevented this.
Bryan Adams was approached to allow his song "Only the Strong Survive" on the soundtrack and perform "Danger Zone". But Adams refused any involvement, feeling that the film glorified war and he did not want any of his work linked to it.
REO Speedwagon were also approached to perform "Danger Zone", but the group declined due to not being allowed to contribute any of their own compositions to the soundtrack.
Eventually, the film producers agreed that "Danger Zone" would be recorded and performed by Kenny Loggins.


Dann Huff, lead vocalist and guitarist from '80s hard rock group Giant, performed guitar on the selection. The bass line is a classic 1980s sound comprised in the main of a plucked bass sound from the ubiquitous Yamaha DX7 synthesizer, with the drums being provided by the LinnDrum (a drum machine designed by Roger Linn) which also appears on hundreds of other 1980s pop hits. A tenor saxophone joins in near the end of the song.

A music video was released in May of 1986 to promote the single. The video was directed by Tony Scott and featured footage of Loggins singing, as well as clips from the film Top Gun, which Scott also directed.

Posted by MrGarabaldi at 7:47 AM