Traveling in the Pan-Am Clipper, Circa 1939 *Edited* and fixed

NOTE: I got an email from OldNFO about missing links and pics.  I hope I fixed the problem and I added some more stuff.

This is for Momma Fargo,*Mwah* she took me to task for having a dirty car.  She told me that I need to clean it,  After hanging my head in mock shame I spent some time cleaning the car after the adventures of last week and the snow and ice.  .I washed the road sand, snow leftovers off the car, truck and the bike...guess it will rain tomorrow. 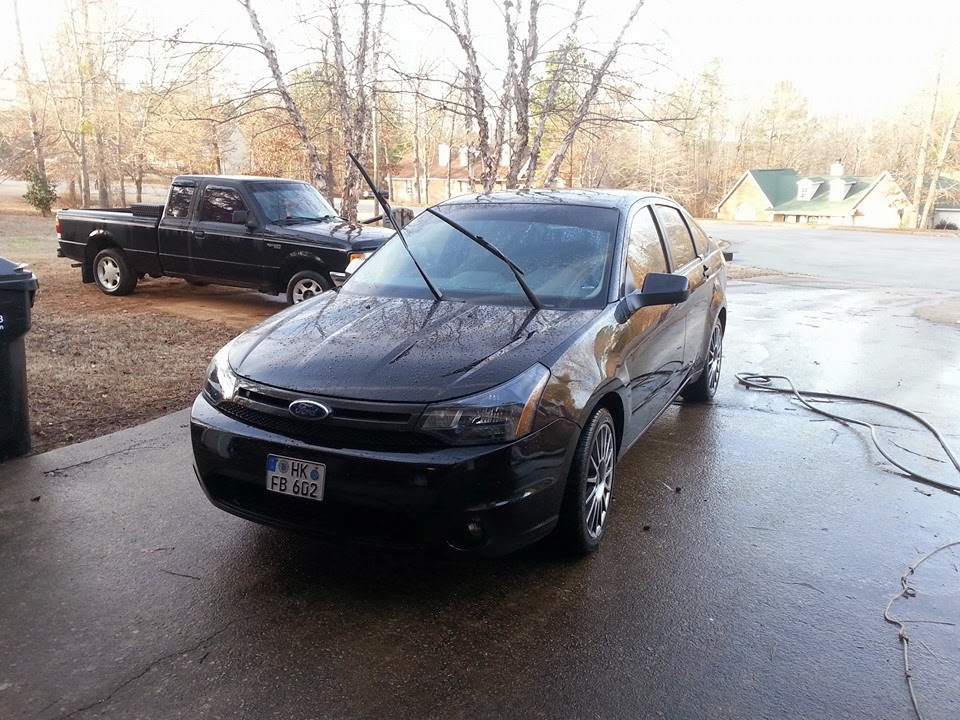 I remember flying in a Pan-Am 747 from Europe to America.  The Iconic Pan-Am logo was the closest airline to a state sponsored airline that ever was in the United States.  What rules there were, seemed to apply to all the other airlines except Pan-Am.  The airline started by Juan Trippe became a worldwide icon, the Pan-Am logo was recognized the world over.  it even made it into a movie from the future. 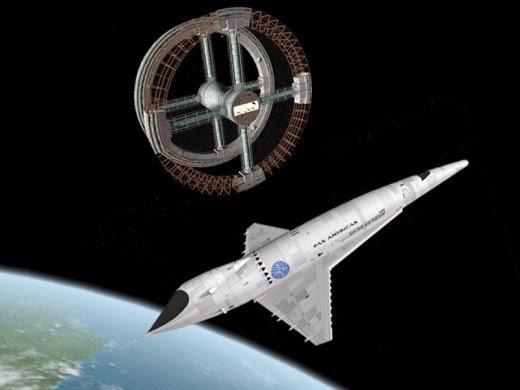 When people traveled back until even the 70's, flying was considered a big deal, you would dress in your Sunday go to meeting clothing.  The last time I flew Delta, I saw a 20 something year old  woman in bedroom slippers, looked like a bathrobe and hair curlers.  My how times have changed.  Pan-Am still has a mystique about it, it was a link to a different time where there were more stringent standards on behavior, and dress and how one acted in public.

Pan American World Airways, commonly known as Pan Am, was the principal and largest international air carrier in the United States from 1927 until its collapse on December 4, 1991. Founded in 1927 as a scheduled air mail and passenger service operating between Key West, Florida, and Havana, Cuba, the airline became a major company credited with many innovations that shaped the international airline industry, including the widespread use of jet aircraft, jumbo jets, and computerized reservation systems. It was also a founding member of the International Air Transport Association (IATA), the global airline industry association. Identified by its blue globe logo, the use of the word "Clipper" in aircraft names and call signs, and the white pilot uniform caps, the airline was a cultural icon of the 20th century. In an era dominated by flag carriers that were wholly or majority government-owned, it was also the unofficial flag carrier of the United States. During most of the jet era, Pan Am's flagship terminal was the Worldport located at John F. Kennedy Airport in New York.

At its peak in the late 1960s and early 1970s, Pan Am advertised under the slogan, the "World's Most Experienced Airline" It carried 6.7 million passengers in 1966, and by 1968, its 150 jets flew to 86 countries on every continent except for Antarctica over a scheduled route network of 81,410 unduplicated miles (131,000 km). During that period the airline was profitable and its cash reserves totaled $1 billion. Most routes were between New York, Europe, and South America, and between Miami and the Caribbean. In 1964 Pan Am began a helicopter shuttle between New York's John F. Kennedy, LaGuardia and Newark airports and Lower Manhattan, operated by New York Airways. Aside from the DC-8, the Boeing 707 and 747, the Pan Am jet fleet included Boeing 720Bs and 727s (the first aircraft to sport Pan Am — rather than Pan American — titles). (The airline later had Boeing 737s and 747SPs (which could fly nonstop New York to Tokyo), Lockheed L-1011 Tristars, McDonnell-Douglas DC-10s, and Airbus A300s and A310s.) Pan Am owned the InterContinental Hotel chain and had a financial interest in the Falcon Jet Corporation, which held marketing rights to the Dassault Falcon 20 business jet in North America. The airline was involved in creating a missile-tracking range in the South Atlantic and operating a nuclear-engine testing laboratory in Nevada. In addition, Pan Am participated in several notable humanitarian flights.
At its height Pan Am was well regarded for its modern fleet and experienced crews: cabin staff were multilingual and usually college graduates, frequently with nursing training. Pan Am's onboard service and cuisine, inspired by Maxim's de Paris, were delivered "with a personal flair that has rarely been equaled." 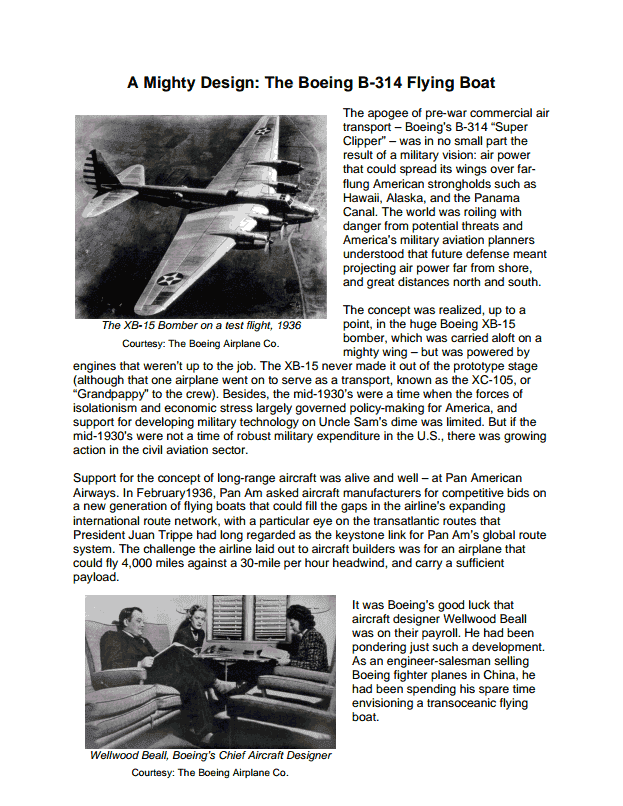 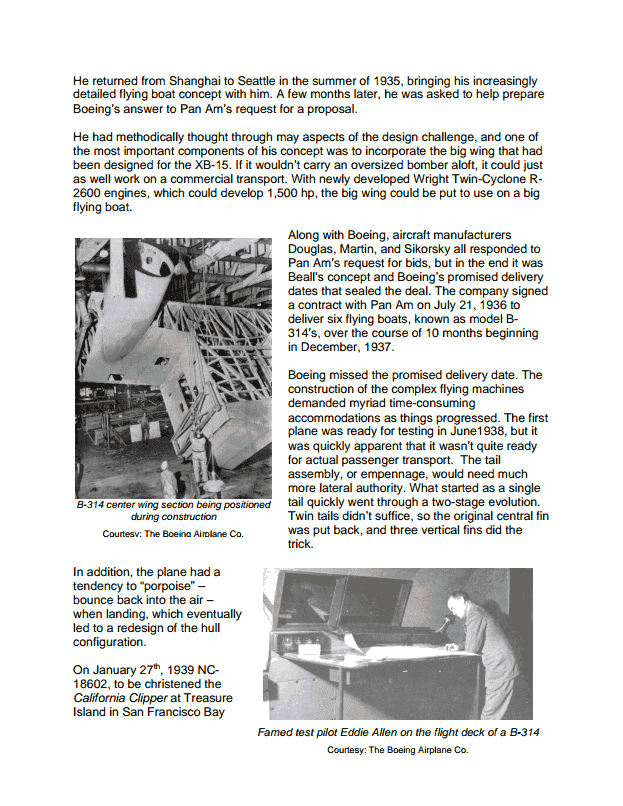 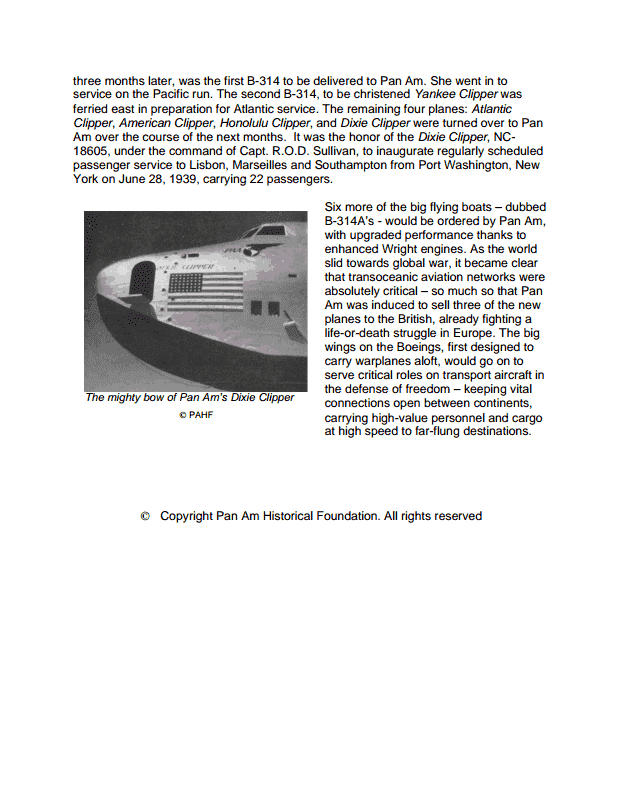 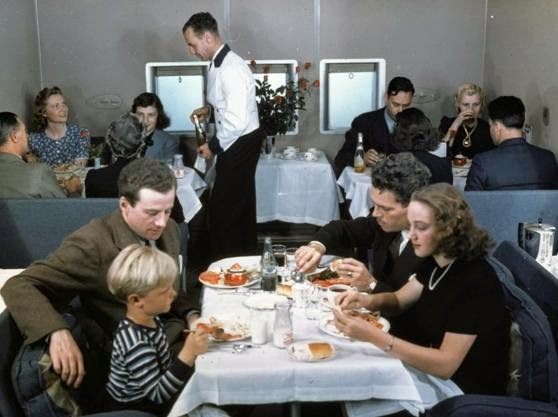 Clipper passengers took their meals at real tables, not their seats.
For most travelers in the 21st century, flying is a dreary experience, full of inconvenience, indignity, and discomfort.
That wasn't the case in the late 1930s, when those with the money to afford trans-oceanic flight got to take the Boeing Model 314, better known as the Clipper.
Even Franklin Roosevelt used the plane, celebrating his 61st birthday on board.
Between 1938 and 1941, Boeing built 12 of the jumbo planes for Pan American World Airways.
The 314 offered a range of 3,500 miles — enough to cross either the Atlantic or Pacific —and room for 74 passengers onboard.
Of course, modern aviation offers an amazing first class experience (and it's a whole lot safer), but nothing in the air today matches the romanticism of crossing the ocean in the famed Clipper.
Thanks to the Pan Am Historical Foundation for sharing its photos. The foundation is currently working on a documentary about Pan American World Airways and the adventure of the flying boat age. Find out more here. 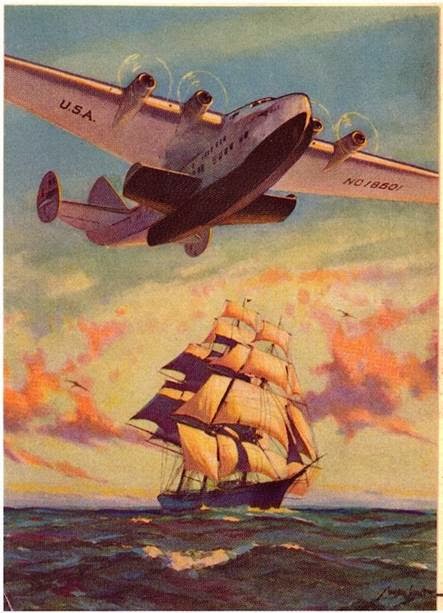 The Model 314's nickname Clipper came from an especially fast type of sailing ship, used in the 19th century. 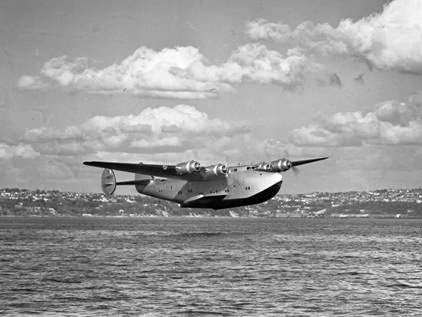 The ship analogy was appropriate, as the Clipper landed on the water, not runways. 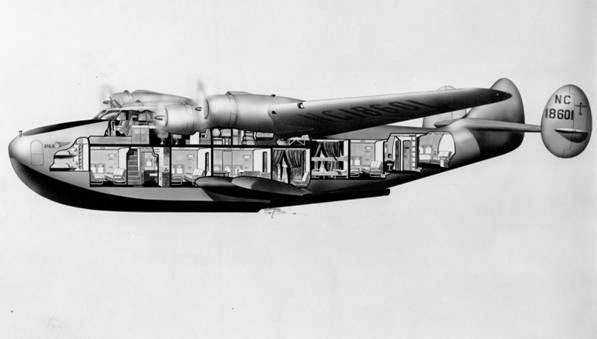 Here's a diagram of the different areas of the plane. 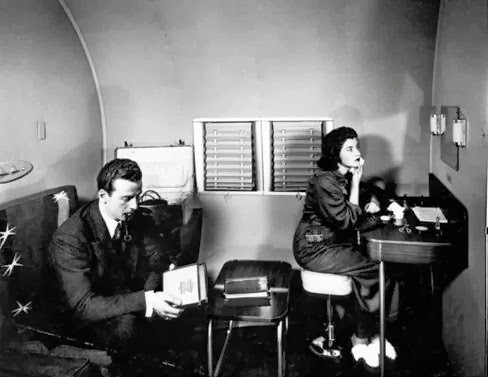 On Pan Am flights, passengers had access to dressing rooms and a dining salon that could be converted into a lounge or bridal suite. 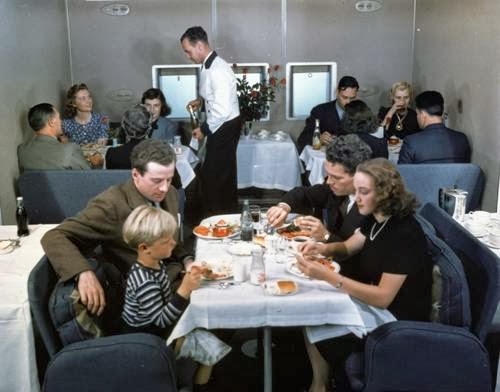 The galley served up meals catered from four-star hotels. 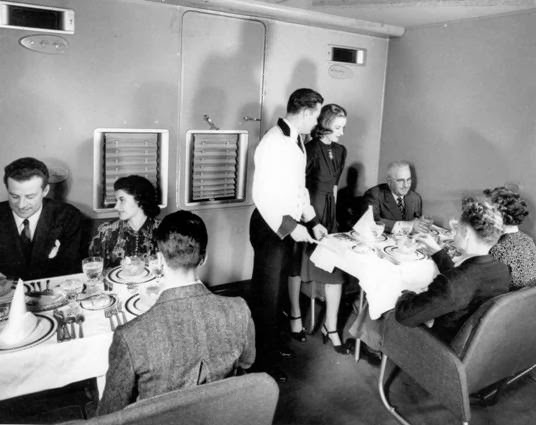 If you want to sit at a table to eat with other people these days, you have to fly in a private jet. 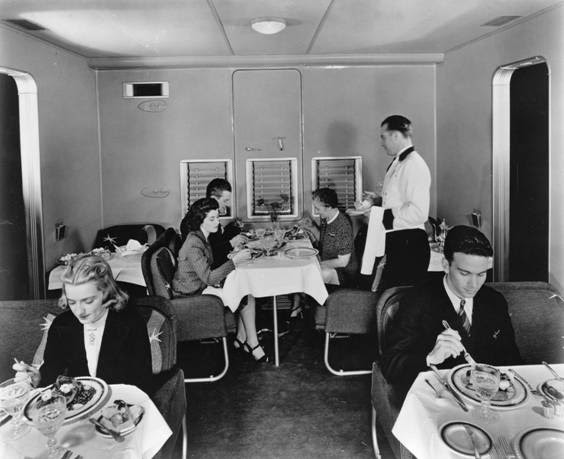 There was room for a crew of 10 to serve as many as 74 passengers. 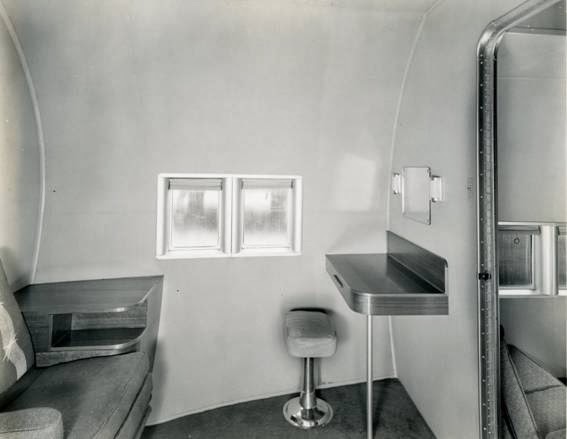 On overnight flights, the 74 seats could be turned into 40 bunks for comfortable sleeping. 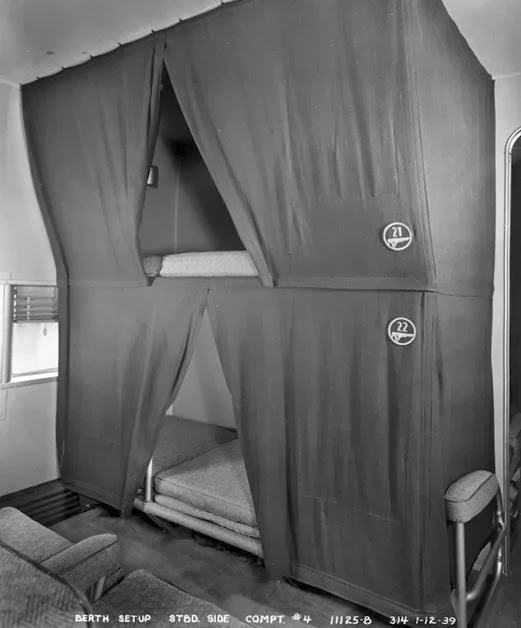 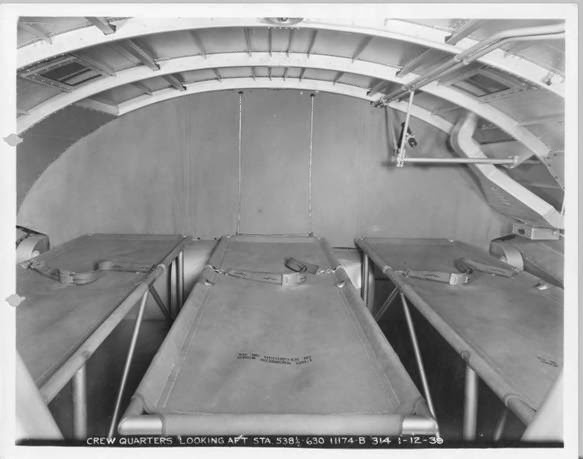 On the 24-hour flights across the Atlantic, crew members could conk out on these less luxurious cots. 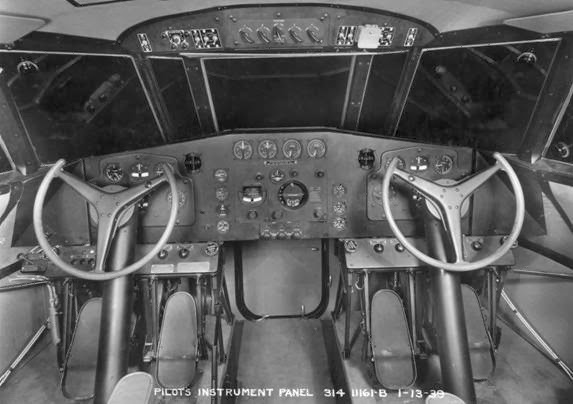 Unlike some modern jets that come with joysticks, the Clipper had controls that resembled car steering wheels. 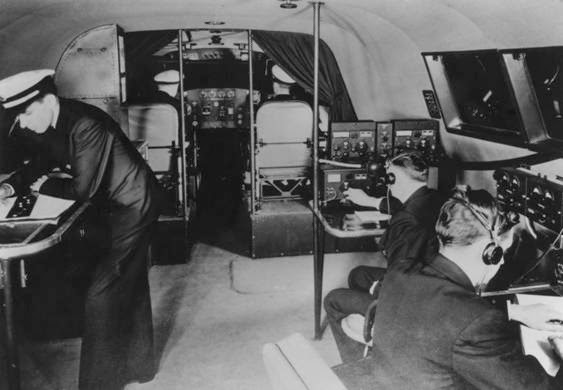 Navigating across the ocean used to require more manpower in the air. 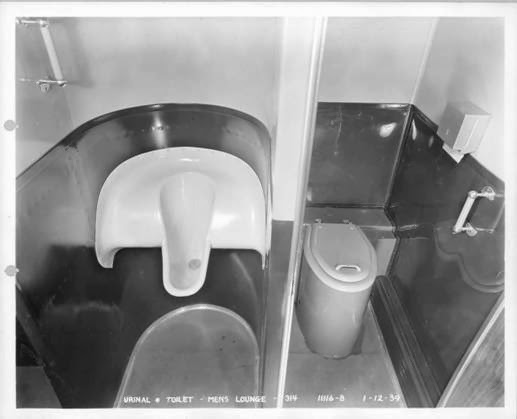 The lavatory wasn't too fancy, but it did have a urinal — something you never see in today's commercial jets, where space is at a premium. 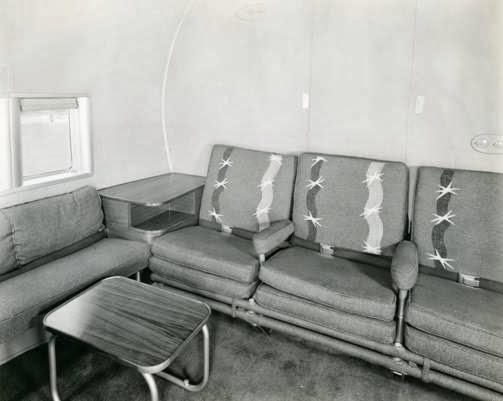 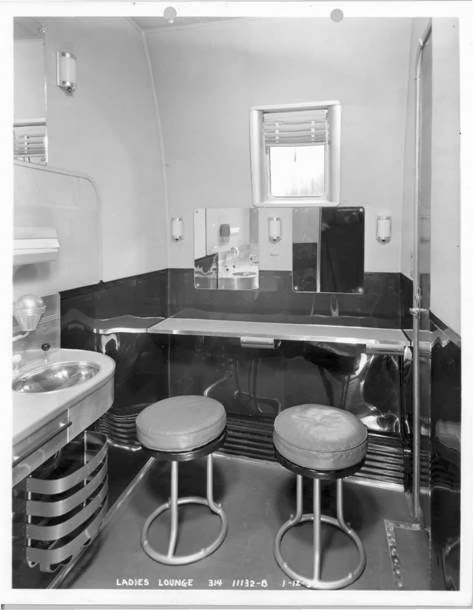 The ladies lounge had stools where female passengers could sit and do their makeup. 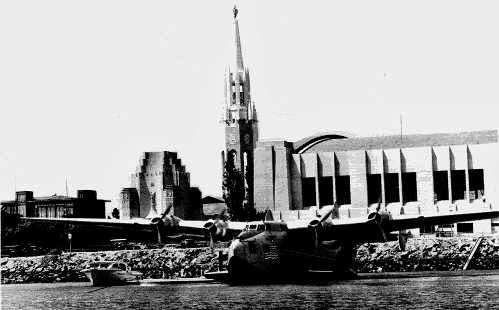 The Clipper made its maiden trans-Atlantic voyage on June 28, 1939.

But once the US entered World War II, the Clipper was pressed into service to transport materials and personnel. 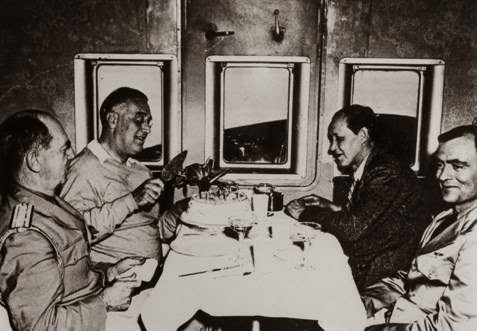 In 1943, President Franklin Roosevelt celebrated his 61st birthday on board.

The Pacific Clipper (civil registration NC18602) was a Boeing 314 Clipper flying boat famous for having completed Pan American World Airways' first around the world flight. The flight of the then-named California Clipper began December 2, 1941 at the Pan Am base on Treasure Island, California for its scheduled passenger service to Auckland, New Zealand. Renamed the Pacific Clipper, it landed at Pan American's LaGuardia Field seaplane base at 7:12 on the morning of January 6, 1942.
NC18602 made scheduled stops in San Pedro, California, Honolulu, Hawaii, Canton Island, Suva, Fiji and Nouméa, New Caledonia en route to Auckland when Pearl Harbor was attacked.
Cut off from the United States due the bombing of Pearl Harbor on December 7, 1941 and commanding a valuable military asset, Captain Robert Ford was directed to strip company markings, registration and insignia from the Clipper and proceed in secret to the Marine Terminal, LaGuardia Field, New York.
Ford and his crew successfully flew over 31,500 miles to home via
At Surabaya, Captain Ford had to refuel with automobile grade gasoline. "We took off from Surabaya on the 100 octane, climbed a couple of thousand feet, and pulled back the power to cool off the engines," said Ford. "Then we switched to the automobile gas and held our breaths. The engines almost jumped out of their mounts, but they ran. We figured it was either that or leave the airplane to the Japs."
On the way to Trincomalee, they were confronted by a Japanese submarine, and Ford had to jam the throttles forward to climb out of range of the submarine's guns. On Christmas Eve, when they took off, black oil began gushing out of the number 3 engine and pouring back over the wing. Ford shut down the engine and returned to Trincomalee. He discovered one of the engine's cylinders had failed.
When Captain Ford was planning his flight from Bahrain, he was warned by the British authorities not to fly across Arabia. Ford said, "The Saudis had apparently already caught some British flyers who had been forced down there. The natives had dug a hole, buried them in it uphttps://www.blogger.com/blogger.g?blogID=1444550425694584077#editor/target=post;postID=5659745135881723280 to their necks, and just left them." Ford flew right over Mecca because the Saudis did not have anti-aircraft guns.
A Pan American airport manager and a radio officer had been dispatched to meet the Clipper at Leopoldville. When Ford landed they handed him a cold beer. Ford said, "That was one of the high points of the whole trip." After NC18602 had completed its harrowing flight to safety, Pan Am renamed the aircraft the Pacific Clipper. The name change was mainly for publicity purposes, arising from the first newspaper articles having wrongly identified the aircraft. NC18602 remained the Pacific Clipper from 1942 throughout the remainder of its career. Purchased by the US Navy in 1946, it was subsequently sold to Universal Airlines but was damaged in a storm and ultimately salvaged for parts 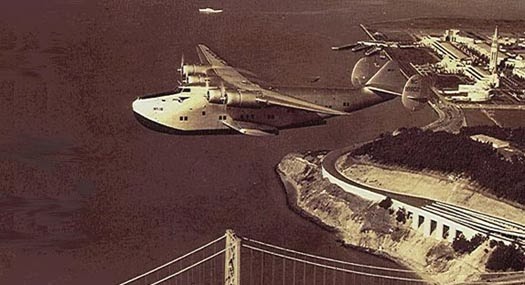 Posted by MrGarabaldi at 9:14 AM