Hey y'all I got off work a bit early so I was able to get in front of the keyboard and get my "Monday Music" off on Monday....I decided to go with REM, and losing my religion.  I first heard of REM when I got their older album at the PX on Robinson Barracks in Stuttgart Germany in the late 80's and their song was "The end of the world as we know it and I feel fine." off their older album called "Documents"  It was actually kinda catchy and funny and we GI liked it.  It did help that REM came from my home state of Georgia, although they are kinda leftist. but that seems to be prevalent with bands I guess.   Speaking of the south, we got socked with an ice storm that masqueraded as snow.  Despite many people that got stuck out there, many others opened places of business, brought food, blankets, a chic-fil-a gave away sandwiches to the stranded motorists, others brought waters and coffee to the stranded motorists, Home Depot and a Kroger opened up so people can crash there and get some sleep in the warmth.  It did give me some hope for people that the better angels of peoples nature came out rather than the looting and vandalism that would be prevalent. 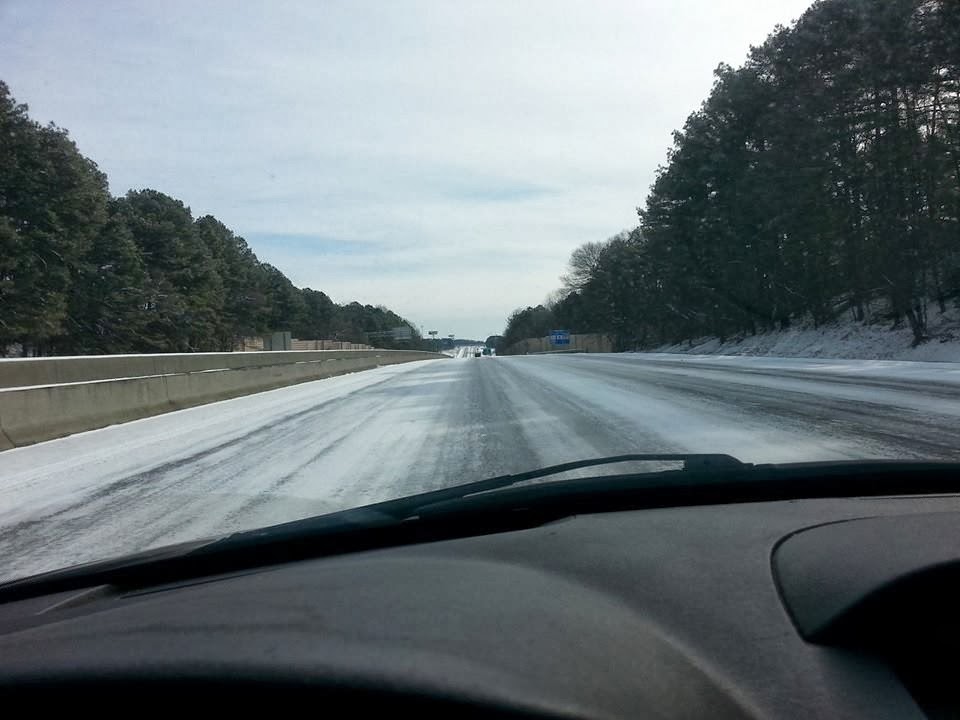 This is me driving home after working my shift and overtime, I wasn't overly concerned, after spending 5 years in Europe, driving in snow and ice wasn't a major issue.  I saw a lot of cars on the side of the road, casualties from the mad dash the night before to get home.  Driving home was almost eerie for there was no traffic on the road and for the Atlanta area, that is unusual. 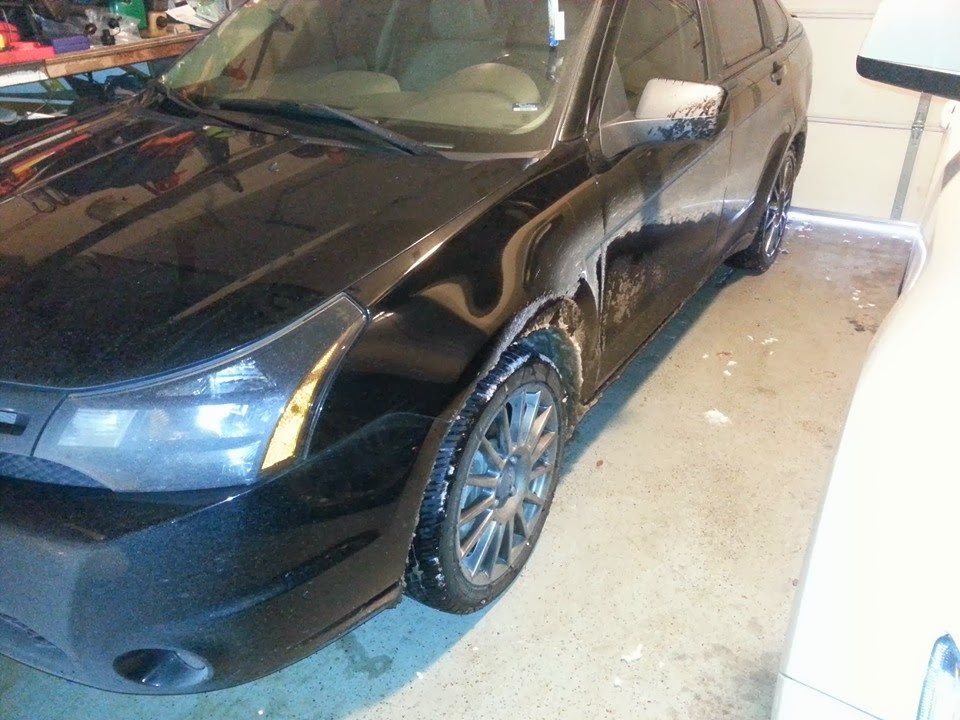 This is my car in the garage after I got home.  I see some washing and cleaning in my future.  Most people took the weather in stride, but some people wanted to complain at the governor Deal and the Atlanta Mayor Reed about the weather....All I can say...."People it is the weather.....we have no control on it, we just have to roll with it.
But I digress, here is the information on REM:
"Losing My Religion" is a song by the American alternative rock band R.E.M. The song was released as the first single from the group's 1991 album Out of Time. Based around a mandolin riff, "Losing My Religion" was an unlikely hit for the group, garnering heavy airplay on radio as well as on MTV due to its critically acclaimed music video. The song became R.E.M.'s highest-charting hit in the United States, reaching number four on the Billboard Hot 100 and expanding the group's popularity beyond its original fanbase. It was nominated for several Grammy Awards, and won two for Best Pop Performance by a Duo or Group with Vocal and Best Short Form Music Video.

R.E.M. guitarist Peter Buck wrote the main riff and chorus to the song on a mandolin while watching television one day. Buck had just bought the instrument and was attempting to learn how to play it, recording the music as he practiced. Buck said that "when I listened back to it the next day, there was a bunch of stuff that was really just me learning how to play mandolin, and then there's what became 'Losing My Religion', and then a whole bunch more of me learning to play the mandolin."
Recording of the song started in September 1990 at Bearsville Studio A in Woodstock, New York.The song was arranged in the studio with mandolin, electric bass, and drums. Bassist Mike Mills came up with a bassline inspired by the work of Fleetwood Mac bassist John McVie; by his own admission he could not come up with one for the song that was not derivative. Buck said the arrangement of the song "had a hollow feel to it. There's absolutely no midrange on it, just low end and high end, because Mike usually stayed pretty low on the bass." The band decided to have touring guitarist Peter Holsapple play acoustic guitar on the recording. Buck reflected, "It was really cool: Peter and I would be in our little booth, sweating away, and Bill and Mike would be out there in the other room going at it. It just had a really magical feel." Singer Michael Stipe's vocal was recorded in a single take. Orchestral strings, arranged by Mark Bingham, were added to the song by members of the Atlanta Symphony Orchestra at Soundscape Studios in Atlanta, Georgia in October 1990. 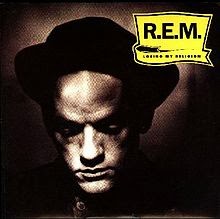 This was the cover for the single "Losing my Religion"
"Losing My Religion" is based on Peter Buck's mandolin-playing. Buck said, "The verses are the kinds of things R.E.M. uses a lot, going from one minor to another, kind [of] like those 'Driver 8' chords. You can't really say anything bad about E minor, A minor, D, and G – I mean, they're just good chords." Buck noted that "Losing My Religion" was "probably the most typical R.E.M.-sounding song on the record. We are trying to get away from those kind of songs, but like I said before, those are some good chords."Orchestral strings play through parts of the song. The song is in natural minor.
In the song, Michael Stipe sings the lines "That's me in the corner/That's me in the spotlight/Losing my religion". The phrase "losing my religion" is an expression from the southern region of the United States that means losing one's temper or civility, or "being at the end of one's rope." Stipe told The New York Times the song was about romantic expression. He told Q that "Losing My Religion" is about "someone who pines for someone else. It's unrequited love, what have you." Stipe compared the song's theme to "Every Breath You Take" by The Police, saying, "It's just a classic obsession pop song. I've always felt the best kinds of songs are the ones where anybody can listen to it, put themselves in it and say, 'Yeah, that's me.'" 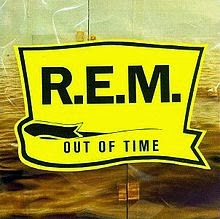 This was the Album Cover, I still have this CD in my CD tower.
"Losing My Religion" was released on February 19, 1991 in the United States as the lead single from R.E.M.'s forthcoming album Out of Time. The band's record label, Warner Bros., was wary about the group's choice of the song as the album's first single. Steven Baker, who was vice president of product management at Warner Bros. at the time, said there were "long, drawn-out discussions" about releasing such an "unconventional track" as the single until the label agreed. While R.E.M. declined to tour to promote Out of Time, the band visited radio stations, gave numerous press interviews, and made appearances on MTV to promote the record. Meanwhile Warner Bros. worked to establish the single at campus, modern rock, and album-oriented rock radio stations before promoting it to American Top 40 stations, where it became a success. "The record crosses the boundaries of being just an alternative record", one Top 40 radio station program director said; he admitted that "Losing My Religion" was "a hard record to program; you can't play L.L. Cool J behind it. But it's a real pop record—you can dance to it."
"Losing My Religion" became R.E.M.'s biggest hit in the United States, peaking at number four on the Billboard Hot 100.The single stayed on the chart for 21 weeks. It charted at number 19 on the UK Singles Chart, and peaked at number 16 and number 11 in Canada and Australia, respectively. Mills said years later, "Without 'Losing My Religion', Out of Time would have sold two or three million [copies], instead of the ten [million copies] or so it did. But the phenomenon that is a worldwide hit is an odd thing to behold. Basically that record was a hit in almost every civilised country in the world." The success of "Losing My Religion" and Out of Time broadened R.E.M.'s audience beyond its original college radio-based fanbase. When asked at the time if he was worried that the song's success might alienate older fans, Buck told Rolling Stone, "The people that changed their minds because of 'Losing My Religion' can just kiss my ass."
The song received a number of critical plaudits. The single placed second in the Village Voice Pazz & Jop annual critics' poll, behind Nirvana's "Smells Like Teen Spirit". R.E.M. was nominated for seven awards at the 1992 Grammy Awards. "Losing My Religion" alone earned several nominations, including Record of the Year and Song of the Year. The song won two awards, for Best Pop Performance by a Duo or Group with Vocals and Best Short Form Music Video. In 2004, Rolling Stone listed the song at number 169 on its list of the "500 Greatest Songs of All Time". In 2007, the song was listed as #9 on VH1's 100 Greatest Songs of the 90s. In 2009, Blender ranked it at number 79 on its list of "The 500 Greatest Songs Since You Were Born".

The music video for "Losing My Religion" was directed by Tarsem Singh. As opposed to previous R.E.M. videos, Michael Stipe agreed to lip sync the lyrics. The video originated as a combination of ideas envisioned by Stipe and Singh. Stipe wanted the promo to be a straightforward performance video, akin to Sinéad O'Connor's "Nothing Compares 2 U". Singh wanted to create a video in the style of a certain type of Indian filmmaking, where everything would be "melodramatic and very dreamlike", according to Stipe.
The video begins with a brief sequence inside a dark room where water drips from an open window. Buck, Berry, and Mills run across the room while Stipe remains seated. A pitcher of milk drops from the windowsill and shatters, and the song begins. Director Singh drew inspiration from the Italian painter Caravaggio and Russian filmmaker Andrei Tarkovsky. The video is laden with religious imagery such as Saint Sebastian and Hindu deities, portrayed in a series of tableaux.
The music video was nominated in nine categories at the 1991 MTV Video Music Awards. The video won six awards, including Video of the Year, Best Group Video, Breakthrough Video, Best Art Direction, Best Direction, and Best Editing. "Losing My Religion" also ranked second in the music video category of the 1991 Pazz & Jop poll.