Airshow Part 2 The Blue Angels and a couple other airplanes

Here is the second part of my airshow pics... The Blue Angels is the United States Navy's flight demonstration squadron, with aviators from the Navy and Marines. The Blue Angels team was formed in 1946, making it the second oldest formal flying aerobatic team (under the same name) in the world, after the French Patrouille de France formed in 1931. The Blue Angels' six demonstration pilots fly the F/A-18 Hornet, typically in more than 70 shows at 34 locations throughout the United States each year, where they still employ many of the same practices and techniques used in their aerial displays in 1946. An estimated 11 million spectators view the squadron during air shows each full year. The Blue Angels also visit more than 50,000 people in a standard show season (March through November) in schools and hospitals. Since 1946, the Blue Angels have flown for more than 260 million spectators.
The airshow started by the flying of "Fat Albert" the team C130, the plane used to do JATO takeoff's I remember one at Dobbins in the early 80's but they quit because the supply of rockets were dwindling.   It was impressive to see the C130 do flyby and other things then the "combat landing" 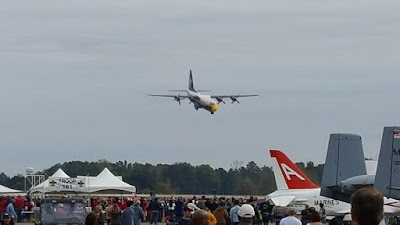 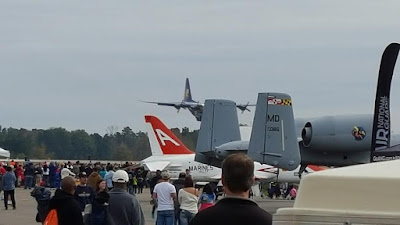 We then were treated to the Blue Angels getting ready to take off..We were too far back to see them walk out to the airplanes...like I said, the place was crowded.  I went on "Youtube" and found a video that shows what I had missed:)
I heard everything that was said...but couldn't see any of it.....I am glad I saw the video.  I was surfing Wiki going from airplanes to aircraft carriers to cruise ship disasters.....that killed a couple of hours...

Here are pics that I took of the planes....my phone takes better pics than I thought it would. 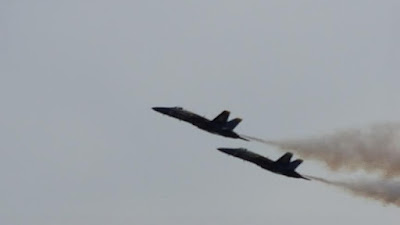 This one was the high angle of attack and slow speed...section High-Alpha Pass: (tail sitting), the show's slowest maneuver. 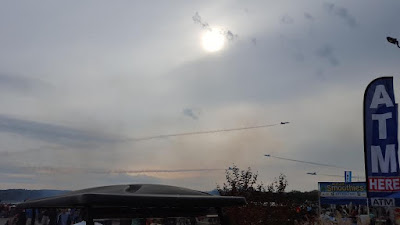 This one was the Angels coming to the center of the airfield the Loop Break Cross (Delta Break): After the break the aircraft separate in six different directions, perform half Cuban Eights then cross in the center of the performance area. 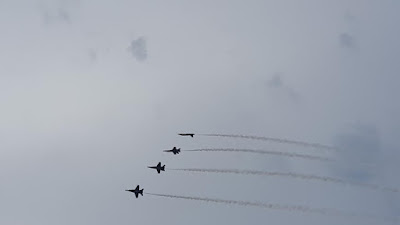 This one is the Angels reassembling after the loop break pass. 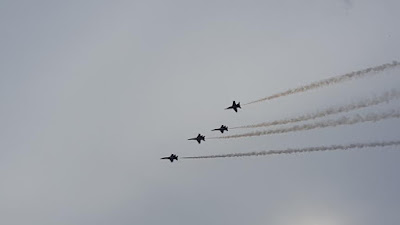 The Angels then landed to the applause and cheers of the fans.
The planes then parked for autographs and pictures 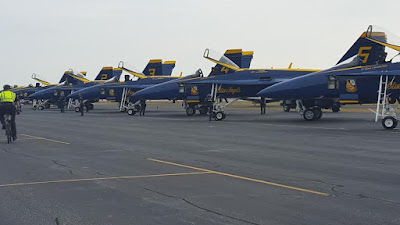 I really enjoyed the blue Angel show, the precision and professionalism shown showed pride in nation and pride in their organization.  My inner geek was happy,   As we headed out I saw a couple of planes the Confederate Commemorative Air Force was restoring,  First was a 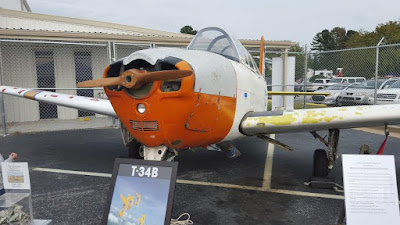 The Beechcraft T-34 Mentor is a propeller-driven, single-engined, military trainer aircraft derived from the Beechcraft Model 35 Bonanza. The earlier versions of the T-34, dating from around the late 1940s to the 1950s, were piston-engined. These were eventually succeeded by the upgraded T-34C Turbo-Mentor, powered by a turboprop engine. The T-34 remains in service more than six decades after it was first designed. 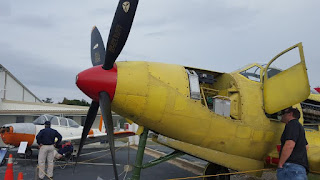 The Bell P-63 Kingcobra is a United States fighter aircraft developed by Bell in World War II from the Bell P-39 Airacobra in an attempt to correct that aircraft's deficiencies. Although the aircraft was not accepted for combat use by the United States Army Air Forces, it was successfully adopted by the Soviet Air Force.
I will attend the airshow next year, it most likely will not be as big for the Great Georgia Airshow to get the Blue Angels was unusual for the event.

Posted by MrGarabaldi at 1:35 AM