Monday Music "The Metro" by Berlin

I heard this song a couple of days ago on my Sirius/XM, I havn't heard this song in years also.  When I heard this song in the mid and late 80's it reminded me riding the train in Germany.  I would try my very broken German on the locals and they were good sports about it and they did appreciate my trying to speak the language.  I did get better and got good enough to get a language trailer on my M.O.S.*.   Even now I can start talking it after a couple of seconds for the syntax is different and I have to mentally change gears to speak it properly.
Berlin is an American new wave band. The group was formed in Los Angeles in 1978 by John Crawford (bass guitar). Band members included Crawford, Terri Nunn (vocals), David Diamond (keyboards), Ric Olsen (guitar), Matt Reid (keyboards) and Rod Learned (drums). Learned left during the first EU tour and was replaced by Rob Brill (drums). The band gained mainstream-commercial success in the early 1980s with singles including "The Metro", "Sex (I'm A...)", "No More Words" and then in the mid '80s with the chart-topping single "Take My Breath Away" from the 1986 film Top Gun. 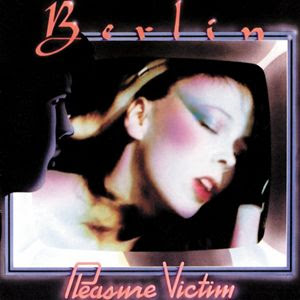 Pleasure Victim is the second studio album by Berlin. The original album was recorded in 1982 and released that year by independent label Enigma Records. After considerable attention received by the second single, "Sex (I'm A...)", the album was re-released worldwide by Geffen Records on January 26, 1983. The album marked the return of lead singer Terri Nunn to the group. To date, it is Berlin's best-selling album and was certified gold by the RIAA in September 1984 and platinum in February 1993. It is the only one of Berlin's albums to be certified platinum and the first that reached gold; two subsequent studio albums and a greatest hits compilation were also certified gold.

The song's music video was their first MTV hit, in heavy rotation on the young channel in its second and third years. Directed by Dominic Orlando, it was filmed in 1983 at GMT Studios in West Los Angeles, California. Terri Nunn only sang two lyrics on camera: "I remember hating you for loving me" and "Sorry". The video became a part of the Berlin Video 45 Geffen-VHS home video, released in 1984.

*Military Occupational Specialty
Posted by MrGarabaldi at 7:24 AM