The 4 boxes of the American Political System...A reminder to the ruling class..

I posted this in the past and I figured it was worth posting again......The current drama going on in the world with the special snowflakes protesting, Isis getting real ambitious after blowing up a Russian jet, they attack Paris.  I know the next attack will come here, those goat rapers already said that they will strike here. What concerns me is that what will happen afterwards?  We have the government doubling down on stupid and bringing in "Syrian Refugee's"   you know the ones that look of Military age, and we are supposed to believe that we will perform a proper vetting process on them? 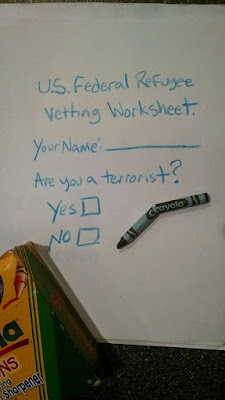 The people allowed the surveillance state to crop up and the government to become overbearing due to 9-11.  What will be the fallout after this attack by ISIS?  We have a generation of candy asses protesting "everything".

Yes this is on my toolbox

What will we do, I know that as Americans we will survive...but the same generation that has been whining will immediately turn to the government and those crooks will use this as an opportunity to get more of their agenda passed especially with the "Dear Leader" in command.   I truly don't have any answers.  I do hope with all my being that we will hopefully become an exceptional nation again.

The 4 boxes of the American Political System.

I had posted this back when I first started blogging.  I will repost since it is pertinant to todays discussions on government and overreach.   The 4 boxes of the American political system work like this:

1.    The Soapbox :  I can stand on a soapbox and criticize the power structure and the politicians and not get thrown in jail and sent to a gulag or get asked "Where do you want your remains sent to?"

2.  The Ballot Box:  I can vote for whomever I want without fear of being thrown into prison for supporting the "Wrong candidate" or being wrapped in a tire and set on fire.

3.  The jury box:  I can feel confident that the rule of law will apply equally to everybody without regard to station in life. and due process isn't being asked "which ear do you want the bullet?

4. Cartridge box:  You open the 4th one when the others are threatened and get the first 3 back. 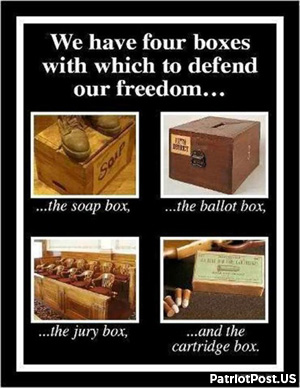