I saw this when I was in the service...certain things are not written of but are lore that is passed down from the crusty old bastards to the new boots.  Before I present the following traditions...there are many that I didn't present..I do have some words for what happened to Paris a couple of days ago.  My prayers go to France after this....France said that they were the United States right after 9-11 when we were attacked by islamist.  This is sad and ironic that this attack happened right "Dear Leader" said that ISIS is contained......He still couldn't say the words "islamic terrorist".. 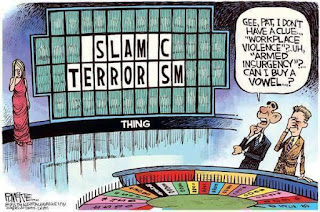 To him the biggest threat is "climate Change"...the stuff that only seems to affect the western based societies.  All the others seem to get the pass.....This seems to be the only thing he cares about.... 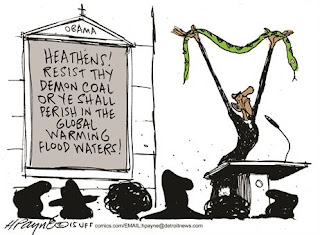 This is Obama/the Democrat's religion..."Global Warming, Global cooling...er....ahh Climate change...To me the "Greens" are the new "Reds"   I call them "Watermelons"..same tired collectivist crap wrapped in a new green packaging since the communist/collectivist/Marxist red packaging seems dated. 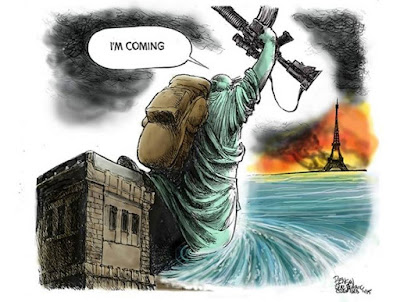 My heart goes out to the French, they still supported us in Afghanistan, and from everything that I read...the French troops over there are very good.   Now to solve the problems with the muslim over there is to basically stop the  invasion immigration encouraged by the Germans trying to commit nationalistic suicide.. 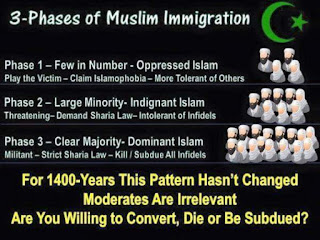 ..to me it is the ultimate act of penance for WWII.  I honestly believe that that is the goal in Merkel's heart to erase Germany from the map and hand the people and land over to the muslims.  I am of the mindset that we need to leave the middle east to their own devices and let them self destruct.....and prevent their entry to the civilized lands since their belief structure isn't compatible with it. 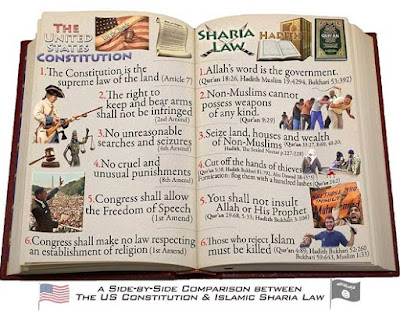 The U.S. military
is awash in regulations, laws, and official traditions. How troops march and salute, what uniform to wear to what event, or what you are supposed to say when greeting a superior are all examples of “on-the-books” behaviors expected of service members.

And then there are the “off-the-books” traditions. They are the unwritten rules: traditions that go back way before the books were printed. These activities — especially the ones involving hazing — are often frowned upon, but still continue to happen, usually without any official recognition.
Here are eight examples.

1. Fighter pilots (or members of flight crew) get hosed down after their final flight. 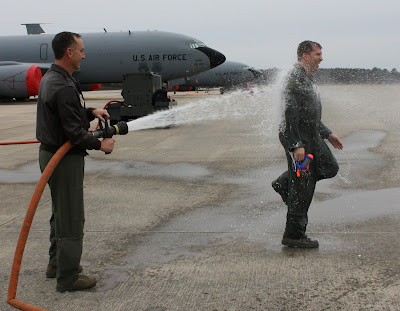 The “fighter pilot mafia” is definitely a thing in the Air Force and Navy, which is the nickname for the pilot sub-culture within each service. Soon after aviators get to a new unit they will go through an unofficial ceremony of receiving their callsigns, and they usually are not very flattering.
On the flip side is the final flight. Much like a football coach gets a giant cooler of Gatorade dumped over their head at the end of a game, pilots sometimes will get hosed down with water by their comrades. In some cases, they’ll be doused with champagne.
In the case of Maj. Vecchione (shown above), his peers also threw string cheese, flour, and mayonnaise on him. Personally, I would’ve thrown in some ketchup and mustard, but hell, I wasn’t there.

2. At a military wedding with a sword detail, the wife gets a sword-tap to her booty to “welcome her” to the family.

Nothing like a little tradition that allows some dude to tap your brand new wife on the butt. When a service member wants to go through the pageantry of having a “military wedding” — wearing their uniform at the altar and bringing along a sword detail — they can expect that at the end of it all, some random dude will be sexually harassing his wife for the sake of tradition.
It goes like this: On the way out right after the ceremony, the couple passes over an arch of swords on both sides. They go through, kiss, go through, kiss, then they get to the last one. Once they reach the final two and pass, one of the detail will lower their sword, tap the bride, and say “welcome to the Army [or Marine Corps, etc]!”
Here’s the Navy version:

3. When a Navy ship crosses the equator, sailors perform the “crossing the line” ceremony, which frankly, involves a lot of really weird stuff. 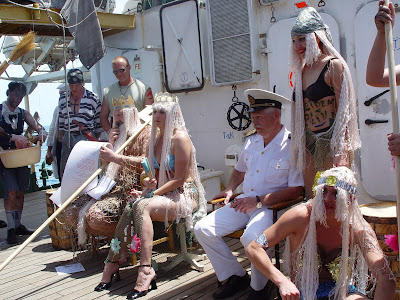 The Crossing the Line ceremony goes far back to the days of wooden ships and Old NFO's youth. According to this Navy public affairs story, sailors were put through this hazing ritual designed to test whether they could endure their first time out at sea.
These days, sailors crossing the line for the first time — called Pollywogs or Wogs for short — can expect an initiation into the club of those who have done it before, referred to as Shellbacks. During the two-day event, the “Court of Neptune” inducts the Wogs into “the mysteries of the deep” with activities like having men dress up as women, drink stuff like a wonderful mix of hot sauce and aftershave, or make them crawl on their hands and knees in deference to King Neptune. I swear I’m not making any of this up.
In the modern military that is decidedly against hazing rituals, the events have toned down quite a bit. In 1972 a sailor may have expected to be kissing the “Royal Baby’s belly button,” which again, is totally a real thing.
Nowadays however, there’s much less of that sort of thing, and the Navy stresses that it’s all completely voluntary (ask any sailor, however, and they’ll probably tell you it’s “voluntary” with big air quotes).

4. Before going on deployment, Marine infantrymen who have never deployed need to shave their heads.

Don’t ask me where this unwritten rule came from or why — other than to distinguish who the total boots in the platoon were — but Marine grunts who have never done a deployment are often told to shave their heads before they move out.
Again, this is one of those “voluntary” you-don’t-have-to-do-this-if-you-don’t-want-to kind of things, .  I am told that such things are "voluntary"......Interestingly enough, those that don't play along were put on plenty of cleanup details and other not-so-fun jobs as a result.

5. When achieving the next rank or earning parachute wings or other insignia, a service member may get “blood-pinned,” though it’s rare these days.

Soldiers who get through five successful jumps at Airborne School in the past could expect to get “blood wings,” but that practice has died down in recent years as the public has learned of it. After a superior pinned their wings on, a soldier would get their new badge slammed into their chest, which often draws blood.
This kind of thing is frowned upon — and prohibited under military regulations — but it still sometimes happens. In some cases, it’s considered a rite of passage and kind of an honor. I personally endured pinning ceremonies that I volunteered for when I picked up the rank of specialist or Sp/4 as it was called back then.
Volunteer or not, it’s a ritual which the brass has endured plenty of bad press over, so they tend to discipline anyone involved whenever it happens.

6. Some units have mustache-growing contests in training or on deployment to see who can achieve the most terrible-looking ‘stache.

The military regulations on facial hair offer little in the way of good looking when it comes to shaves. Most men are not allowed to grow beards (except for some special operators) and although they are allowed, mustaches are generally frowned upon. Why they are frowned upon usually comes down to how terrible they often look.

Photo: MCB Hawaii
Don’t expect any mustache greatness ala Rollie Fingers; troops usually have to keep the mustache neatly trimmed within the corners of their mouth. Those regulations give way to the terribleness derived from the “CAX ‘stache,” which is what Marines refer to as the weird-looking Hitler-like mustache they’ll grow out while training at 29 Palms.
These contests sometimes extend overseas, especially when junior troops are away from the watchful eyes of their senior enlisted leaders. But whenever the sergeant major is around, you might want to police that moostache.

7. First-year West Point cadets have a giant pillow fight to blow off steam after the summer is over.

Before they become the gun-toting leaders of men within the United States Army, first year cadets are beating the crap out of each with pillows in the school’s main courtyard. The annual event is organized by the students and has occurred since at least 1897, according to The New York Times.
While it’s supposed to be a light-hearted event featuring fluffy pillows filled with things that are, you know, soft, some [blue falcon] cadets have decided to turn the event bloody in recent years. One first-year cadet told The Times in September: “The goal was to have fun, and it ended up some guys just chose to hurt people.”
That quote came from a story that broke months ago after the “fun” pillow fight ended with at least 30 cadets requiring medical attention, 24 of which were concussion

8. Naval Academy midshipmen climb a lard-covered monument for a hat.

Around the same time that first-year West Point cadets are beating each other and causing concussions, 1,000 screaming Navy midshipmen are charging toward a 21-foot monument covered in lard with a hat on top. The goal: Retrieve the first-year “plebe” hat and replace it with an upperclassmen hat, a task which signifies their transition to their next year at the Academy.
Beforehand, upperclassmen hook up the plebes with about 200 pounds of greasy lard slapped on the sides of the Herndon Monument, making their task a bit more difficult. They need to use teamwork and dedication to climb their way to the top, which can take anywhere from minutes to over four hours (Class of 1995 has the longest time 4 hours, 5 minutes).
According to the Academy’s website, the tradition is that the first guy to make it to the top will likely rise to the rank of admiral first. That is if he or she doesn’t get themselves fired first.

Eric Kammeyer removes the “dixie cup” cap from the Herndon Monument, a 21-foot greased obelisk at the Naval Academy in Annapolis, in 1997. Tradition holds that the plebe who replaces the cap with a midshipman’s hat will be the first from his class to attain the rank of admiral. (John Makely/Baltimore Sun)
Posted by MrGarabaldi at 2:29 PM