An interesting though and statistic on the election process from 2016

I ran across this on the internet and I liked the information shown especially the number of counties that Trump won versus Clinton. 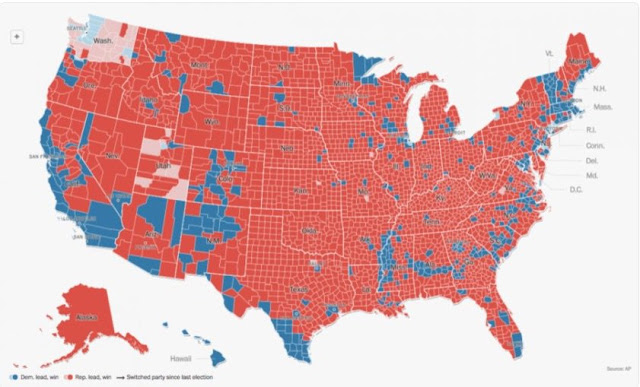 Trump Won 3084 of 3141 Counties, Clinton Won 57. The number of votes that Clinton beat Trump by - 1.3 million - could all be contained in the five boroughs of New York City, or within the State of California. In other words, without the Electoral College, the entire United States could be ruled by the majority of the citizen within a single state, or in the case of New York, within a single city. The overwhelming victory of Republican candidates in both Houses of Congress and in State legislatures across the country does not represent the end of the Republic, but rather that our Republic - based on democratic principles - WORKS and is in remarkably shape for two centuries.
Posted by MrGarabaldi at 7:00 PM

Email ThisBlogThis!Share to TwitterShare to FacebookShare to Pinterest
Labels: election 2016