Monday Music "Linger" by the Cranberries

"Linger" is a song composed by Irish musicians Dolores O'Riordan and Noel Hogan of the rock band The Cranberries, released in 1993. The song, which has an acoustic arrangement featuring a string section, became the band's first major hit, peaking at #3 in the Republic of Ireland, #8 in the United States, and #14 in the UK. The song was voted by Triple J listeners as #3 on the Triple J Hottest 100, 1993 chart. 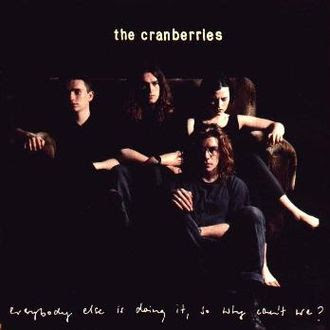 In the documentary '99 Love Life & Rock 'n' Roll, O'Riordan says that the song is about her first serious kiss. Originally, the lyrics were written by Cranberries' first singer Niall Quinn. After O'Riordan was hired as the lead singer for the band, she wrote her own set of lyrics, turning it into a song of regret and based on a soldier she once fell in love with.

The music video for "Linger", shot in grayscale, is a tribute to Jean-Luc Goddard's 1965 noir film Alphaville. In one of the rooms of the hotel, a silent film is being shown which features 1950s stripper Blaze Starr.
Posted by MrGarabaldi at 6:59 AM