Now that the election is over, I will spend more time doing historical stuff and 2nd amendment stuff.  I will still post political articles and muses and pithy thoughts but will spend more time doing historical stuff and things that I like :)  I saw this article and decided do some digging and pull more information together.  I figured this would be a fun article to write since I like history and Pearl Harbor I and many of my friends have talked about that attack and what it meant to the country.  This article would have been cool for a DEC 7th post but I wasn't aware of it until now. 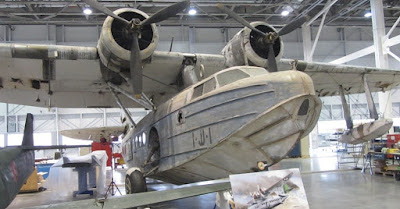 On the 75th anniversary of the Japanese attack Pearl Harbor, there was a plane with a unique story to tell. It is one of the few planes to have flown against the Japanese on that day. With its silver and orange-yellow paint scheme with a bright green tail and red trim, it wasn’t the most likely combat aircraft.
It was designed to be a small airliner for transporting troops, mail, and photographers around Hawaii. It had a boat hull for landing and take-off in the water and big tires for landing and taking off on a runway. The plane was piloted by Ensign Wesley Hoyt Ruth.
“The fact that Ruth got out and got back is . . . absolutely amazing,” says Smithsonian museum specialist Pat Robinson. 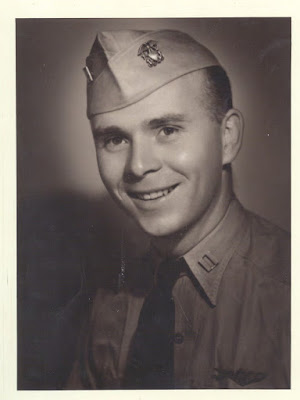 Robinson said that the plane would not have survived if it had found the Japanese fleet. It was also fortunate not be shot down by the Americans as they returned to Pearl Harbor.
It’s also amazing that the plane was not sent to the junkyard for scrap. “Somewhere . . . someone looking at the log books realized the significance of the airplane, and where it had been,” and alerted the Smithsonian, which retrieved it from military storage, Robinson said.
“It’s a huge deal, to have this here,” he said. “It represents American involvement in the Second World War. It was there when it started.”
The Smithsonian wants to restore the plane, but there are a lot of planes in line ahead of it. The plane was built for the Navy in 1938.  It was built at the Sikorsky plant in Stratford, Connecticut.  It’s a big plane with two huge propeller engines in the wings, a hatch in the nose for photography, and porthole-type windows.
The museum curators found an old emergency water purification kit and the rusted keys to a lockbox in the radio compartment. Lockbox keys also were found on the plane, which had a boat-like hull to allow it land on water and wheels to come in on a runway. (Jahi Chikwendiu/The Washington Post)
The plane was part of a squadron based on Ford Island in the middle of Pearl Harbor.
Ruth was having breakfast in his bachelor’s quarters at the time of the attack.  He thought that it might be a drill until he saw the bombs.
His son, Thomas A. Ruth II, said that his father was an experienced aviator who could fly anything.
Ruth survived the war, but his brother, Thomas, who was also a Navy pilot was killed when he was shot down in the South Pacific in 1943.
Ruth grabbed his coat and jumped into his convertible and drove as fast as he could toward the airstrip to avoid being hit by enemy fire.  As he reached the runway, the USS Arizona exploded, showering the area with pencil-sized gunpowder pellets.
Once the attack ended, the Americans wanted to find the fleet that had attacked them.  A senior officer told Ruth to take the first plane and go find them.
Ruth piloted the plane, and Emery C. “Pappy” Geise, 35, was his co-pilot.  Oscar W. Benefeil Jr. worked the radio and Amos P. Gallupe was the plane captain. Two other sailors joined them on the flight. 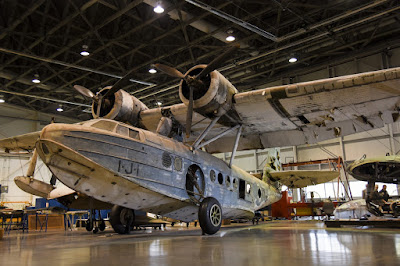 Before takeoff, the senior officer provided three Springfield rifles. Ruth said, “we would have had to shoot through the windows.”
They took off in the brightly colored plane and headed north.
They flew for hours and covered 250 miles but didn’t see anything. The enemy fleet was in the Pacific, north of Hawaii, but the crew made no contact. The next task was to get back home without being shot down by nervous soldiers from their own side.  According to historians, numerous US planes were shot down by anxious US anti-aircraft guns.
Luckily, they landed back at the airstrip safely.
After that, the plane was sent to a base in California and then given to a forerunner of NASA for testing.  It was placed in storage after that and then sent to the Smithsonian when the historical importance of the plane was realized.
Ruth passed away at the age of 101 in Matthews, NC.  He was buried in Arlington National Cemetery in January, The Washington Post reported.
Because of his bravery at Pearl Harbor, Ruth earned the Navy Cross, their second-highest honor.
“Although contact with the enemy meant almost certain destruction,” his citation reads, Ruth’s courage, airmanship, and skill “were at all times inspiring and in keeping with the highest traditions of the United States Naval Service.” 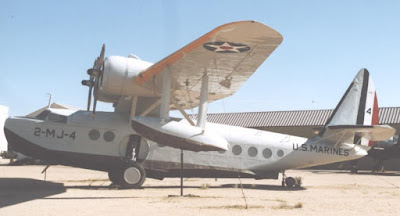 Here are some details on this airplane, I cribbed the information from "Google" and "Wiki".
The S-43 first flew in 1935, and was a smaller version of the Sikorsky S-42 "Clipper". It accommodated between 18 and 25 passengers, with a separate two-crew forward cockpit.[1] The S-43 was known as the "Baby Clipper" in airline service.
On April 14, 1936, An S-43 with a 500 kilograms (1,100 lb) payload and piloted by Boris Sergievsky set an altitude record for amphibious aircraft when it reached an altitude of 27,950 feet above Stamford, Connecticut. Also aboard was designer Igor Sikorsky.
In total, approximately 53 S-43s were built, including examples of the twin-tailed S-43B. 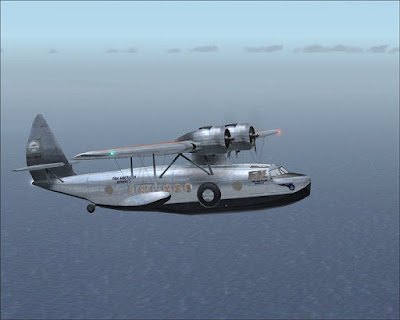 The S-43 was used primarily by Pan American World Airways for flights to Cuba and within Latin America. Two were also flown by Reeve Aleutian Airways in Alaska and three were used by Inter-Island Airways of Hawaii, the predecessor to modern-day Hawaiian Airlines, to ferry Pan-Am Clipper passengers and local residents from Honolulu to the other islands. One aircraft was purchased by Norwegian airline Det Norske Luftfartselskap. 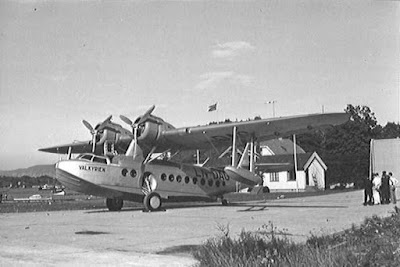 Panair do Brasil operated seven aircraft. 5 S-43 were used between 1937 and 1945 by the French company Aéromaritime on a colonial airway between Dakar (Senegal) and Pointe-Noire (Congo).
Five aircraft were acquired by the U.S. Army Air Corps in 1937 under the designation OA-8 and were used for transport of freight and passengers. 17 aircraft were procured by the U.S. Navy between 1937 and 1939 as the JRS-1, two of which served the U.S. Marine Corps. One JRS survived in service at the end of 1941. 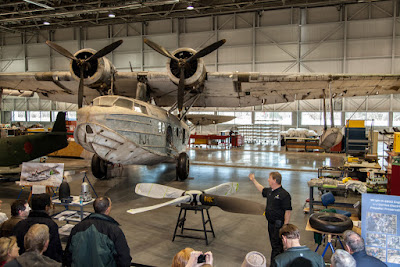 The Smithsonian National Air & Space Museum's Steven F. Udvar-Hazy Center in Virginia is currently restoring a Sikorsky JRS-1 that was on duty at Pearl Harbor on December 7th, 1941.
Two aircraft went to private owners: Harold Vanderbilt and Howard Hughes. Hughes' S-43 N440 remains the last example of this aircraft type flying . It is now owned by Kermit Weeks and has been relocated from Texas to the restoration facility at the Fantasy of Flight Museum in Polk City, Florida where it is awaiting reassembly and restoration.

Posted by MrGarabaldi at 6:48 PM