The Amethyst Incident or the Yangtse incident and John Glenn

Before I get to this post and how the post came to be,  I just heard that John Glenn just crossed beyond the rim.  he was considered the all-American hero for his exploits on the battlefield and later in space and he was a U.S. Senator for the State of Ohio. 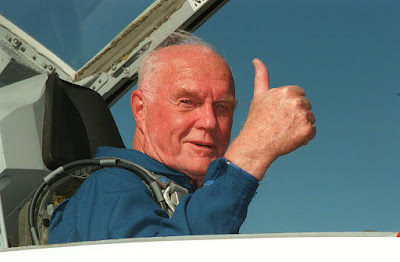 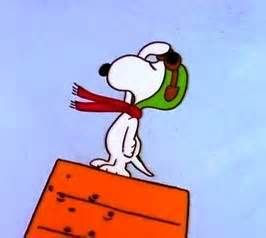 I was surfing through youtube and was watching various "tattoo's" and I was watching one involving the changing of the Guard at Buckingham Palace and youtube groups video clips and movie clips depending on your interest and this popped up on my feed, so I started googling and yes such a thing did happen in 1949.   This reminded me of the "Sand Pebbles" movie and the running of the gauntlet.

This is very eloquently spoken about Military service and what it means.

The Amethyst Incident, also known as the Yangtze Incident, in 1949 involved the British Royal Navy ship HMS Amethyst being trapped on the Yangtze River for three months, during the Chinese Civil War. 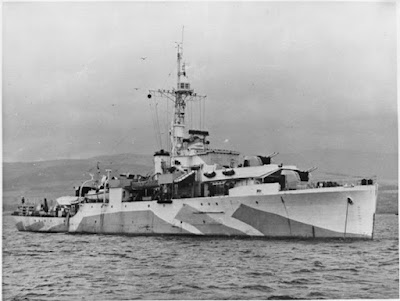 On 20 April 1949, HMS Amethyst, commanded by Lieutenant Commander Bernard Skinner, was on her way from Shanghai to Nanking to replace Consort, which was standing as guard ship for the British Embassy there during the Chinese Civil War between the nationalist Kuomintang and the Chinese Communists. According to the Royal Navy, at around 08:31, after a burst of small arms fire, a People's Liberation Army (PLA) field gun battery on the north bank of the river fired a salvo of ten shells, which fell well short of the ship, and was assumed to be part of a regular bombardment of Nationalist forces on the south bank. Speed was increased, and large Union flags were unfurled on either side of the ship, after which there was no more firing from this battery.

At 09:30, as the frigate approached Kiangyin (Jiangyin) further up the river, she came under sustained fire from a second PLA battery. The first shell passed over the ship, then the bridge, wheelhouse and low power room were hit in quick succession, Lt Cdr Skinner was mortally wounded, and all the bridge personnel were disabled. The coxswain on the wheel, Leading Seaman Leslie Frank, was seriously injured and as a result the ship slewed to port and grounded on the bank before control of the ship was resumed. Before the ship was hit, the order to open fire had been given, but when the director layer pulled the firing trigger, nothing happened, because the gunfiring circuits were disabled when the low power room was hit. First Lieutenant Geoffrey L. Weston assumed command of the vessel, although also wounded himself. PLA shells exploded in the sick bay, the port engine room, and finally the generator, just after the injured Weston's last transmission: "Under heavy fire. Am aground in approx. position 31.10' North 119.50' East. Large number of casualties".
The order was given to fire in local control with each turret firing independently, but Amethyst had grounded in such a way that neither of the two gun turrets at the front of the ship could be brought to bear on the PLA batteries, leaving the single stern turret to return fire. This turret was soon hit and disabled. None of the close range weapons could be brought to bear on the PLA batteries. The shore batteries continued to fire at Amethyst with their artillery, causing more damage and casualties to the ship. 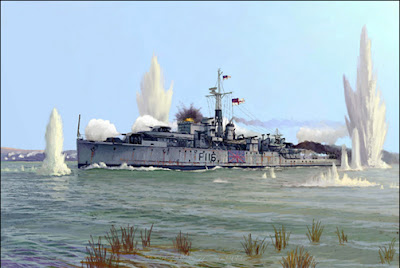 Some time between 10:00 and 10:30, Weston ordered the immediate evacuation to shore of anyone who could be spared. A boat was manned to take people the short distance to shore and some men swam ashore. The batteries switched their fire to the men being evacuated and further evacuation was stopped. Fifty-nine ratings and four Chinese mess boys made it to the Kuomintang-controlled southern bank, but two men were assumed drowned while swimming ashore. Those who survived were joined by the seriously wounded from Amethyst who had been landed by sampan, with the assistance of the Chinese Nationalists on the following day. Both parties were taken to a missionary hospital in Kiangyin where they were met by a party from the British Embassy in Nanking and put on a train for Shanghai. Remaining on board were about 60 unwounded men. The shelling had stopped, but no one could move without drawing the attention of PLA snipers. 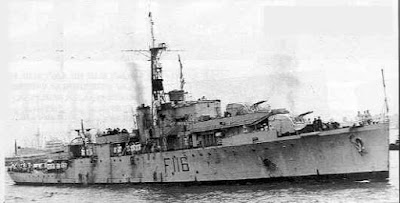 By the time the shelling stopped at about 11:00, 22 men had been killed and 31 wounded in all. Amethyst had received over 50 hits and holes below the waterline were plugged with hammocks and bedding. During this time the destroyer Consort was sighted, flying seven White Ensigns and three Union flags, steaming down from Nanking at 29 knots. Admiral Madden, the Flag Officer, second in command, Far East Station, ordered the destroyer HMS Consort (Commander Robertson) from Nanking to go to the Amethyst's assistance, and the frigate Black Swan (Captain Jay) from Shanghai to Kiang Yin, 40 miles down river from the Amethyst. Consort reached the Amethyst at about three in the afternoon and was immediately heavily engaged. She found the fire too heavy to approach Amethyst and therefore passed her at speed down river. She turned two miles below and again closed Amethyst to take her in tow. But again she came under such heavy fire that she was obliged to abandon the attempt, although she answered the shore batteries with her full armament (including 4.5-inch (114 mm) guns) and signaled that she had silenced most of the opposition. Half an hour later her signals ceased, though she was making a second attempt to take the Amethyst in tow, having turned downstream again. This attempt also failed and she sustained further damage and casualties during which her steering was affected. She therefore had to continue downstream out of the firing area with 10 men killed and 23 wounded. 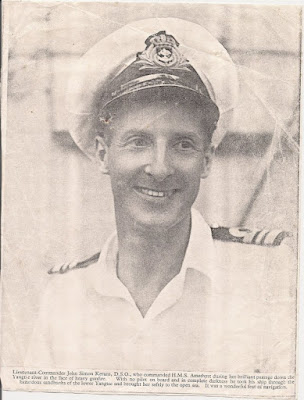 Amethyst was re-floated just after midnight, on 21 April, after lightening the ship, and she moved up river. The Assistant British Naval Attaché, Lieutenant Commander John Kerans, joined the ship on 22 April after he had dealt with all the wounded and unwounded men who had been sent ashore. He assumed command of the ship that day.
During the next few days Amethyst moved several times, but each time she got under way the batteries opened fire at her and the ship was forced to anchor finally finishing up off Fu Te Wei.

On 21 April a signal was received: "HM ships London and Black Swan are moving up river to escort the Amethyst down stream. Be ready to move." The cruiser London and the frigate (ex-sloop and Amethyst's sister ship) Black Swan were heavily shelled as they attempted to help Amethyst and retreated with 3 killed and 14 wounded. 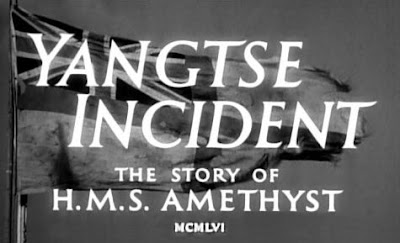 On 30 April the PLA demanded that Britain, the United States, and France quickly withdraw their armed forces from any parts of China. During the negotiations the Communists insisted that the British ship fired first, but eventually in 1988 the PLA commander Ye Fei admitted that it was his troops that fired first. Amethyst remained under guard by the PLA for ten weeks, with vital supplies being withheld from the ship. Negotiations were stuck because Kerans would not accept the demand from Colonel Kang Yushao (康予召), who was the PLA representative, that the British state had wrongly invaded Chinese national waters and had fired upon the PLA first. Because the communists (and later the People's Republic of China) did not acknowledge any treaties between the previous Chinese government and the British, they insisted that it was illegal for Amethyst to cruise in the Yangtze river.

On 30 July 1949 Amethyst slipped her chain and headed downriver in the dark, beginning a 104-mile (167 km) dash for freedom running the gauntlet of guns on both banks of the river. She followed the passenger ship Kiang Ling Liberation in the hope that the observers ashore would be confused and not see Amethyst in the dark. When the battery opened fire, the fire was directed at the Kiang Lin Liberation which was sunk by the gun fire, with heavy civilian casualties. At 0500 hours on 31 July, Amethyst approached the PLA forts at Par Shan (Baoshan) and Woosung (Wusong) with their searchlights sweeping the river. At 0525 a pre-planned meeting with the destroyer Concord took place, at which point Amethyst sent the famous signal "Have rejoined the fleet south of Woosung. No damage. No casualties. God save the King". Concord had been ordered to prepare to provide gun support to Amethyst if she came under fire from the shore batteries at Woosung. To achieve this she had moved up the Yangtze during the night, at action stations. Fortunately, Amethyst was not spotted by the shore batteries and the two ships then proceeded down river until at 0715 they stood down from action stations and after clearing the river mouth arrived at the Saddle Islands at 1200 hrs to anchor and transfer much needed oil and stores. After a short stay at anchor, Concord lent Amethyst sailors to fill gaps in her ship's company and the two ships set sail for Hong Kong.

Next day the cruiser Jamaica (flying the flag of the Flag Officer Second in Command Far East Fleet) and destroyer Cossack took over as escort and proceeded to Hong Kong. Concord was sent to Japan after being sworn to secrecy. Amethyst subsequently received a message of congratulations from King George VI:


Please convey to the commanding officer and ship’s company of HMS AMETHYST my hearty congratulations on their daring exploit to rejoin the Fleet. The courage, skill and determination shown by all on board have my highest commendation. Splice the mainbrace.


Future Governor of Hong Kong Edward Youde was on the British Embassy Staff at Nanking. At great personal risk he penetrated the Chinese Communist lines in an attempt to negotiate the release of Amethyst with the PLA. His negotiations came to naught. Youde later was made a Member of the Order of the British Empire for his actions.

Posted by MrGarabaldi at 6:01 PM