Flying Tigers, some information and some background. 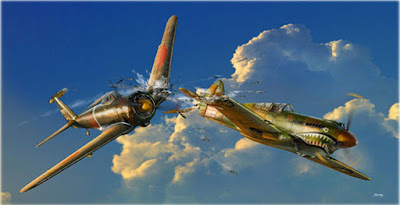 ONE THE HARD WAY – Dan Zoernig
Christmas Day, 1941. American Volunteer Group Flight Leader Parker Dupouy finds his guns jammed during combat high over the Gulf of Martaban. Determined to bring down his adversary, he rams the Hayabusa Oscar of Lt. Hiroshi Okuyama of the JAAF 64th Sentai. Though he lost four feet of his wingtip and his entire aileron, Dupouy made it back to his base to fight another day. Lt. Okuyama’s aircraft, however, broke up in flight and carried him to his death. Dupouy went on to score 6.5 victories in the air before war’s end.


The P-40B Tomahawk evolved from the Curtiss Model 75 Hawk, a radial-engined fighter introduced in the mid-1930s. First flown in October 1938, the XP-40 was the fastest U.S. Army fighter at the time, and deliveries of the P-40 began in June 1940. The P-40B first flew in November 1941, and was quickly sent to the Royal Air Force (RAF) under Lend-Lease. The original models lacked self-sealing fuel tanks and carried two .50-caliber cowl-mounted guns and two .30-caliber guns in the wings. The P-40B was improved with self-sealing tanks, pilot armor and two extra wing guns, though the RAF versions of the Tomahawk were armed with six .303-caliber machine guns. B and C-model Tomahawks served with the RAF in North Africa in 1941-1942, where it was quickly discovered that the aircraft was inferior to the German BF-109, except at low altitude. The British turned down further deliveries, preferring to wait for the more powerful P-40D and E "Kittyhawk." 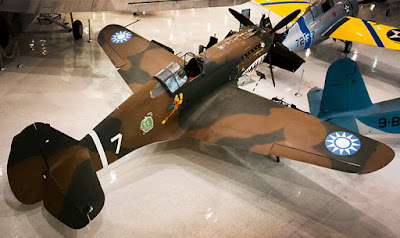 P40B at the Naval Aviation Museum, Awesome Place, well worth the trip...and they let you touch the airplanes!! 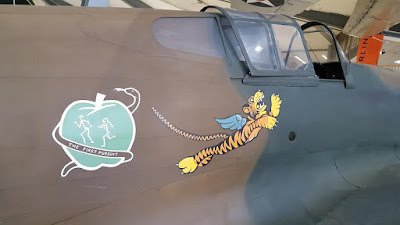 Insignia of the AVG, this one is the 1st squadron "Adam and Eve", and this was taken by me at the same Naval Aviation Museum...the place that lets you touch the airplanes!!

In describing the genesis of the name "Flying Tigers" and the group's insignia, Chennault says:
"Before I left the United States in the summer of 1941, I asked a few friends in Louisiana to watch the newspapers and send me any clippings about the A.V.G.  Now I was being swamped with clippings from stateside newspapers, and my men were astonished to find themselves world famous as the Flying Tigers.  The insignia we made famous was by no means original with the A.V.G.  Our pilots copied the shark-tooth design on their P-40's noses from a colored illustration in the India Illustrated Weekly depicting an R.A.F. squadron in the Libyan Desert with shark-nose P-40's.  Even before that the German Air Force painted shark's teeth on some of its Messerschmitt 210 fighters.  With the pointed nose of a liquid cooled engine it was an apt and fearsome design.  How the term Flying Tigers was derived from the shark-nosed P-40's I never will know.  At any rate we were somewhat surprised to find ourselves billed under that name.  It was not until just before the A.V.G. was disbanded that we had any kind of group insignia.  At the request of the China Defense Supplies in Washington, the Walt Disney organization in Hollywood designed our insignia consisting of a winged tiger flying through a large V for victory."*
After the fall of Rangoon, the sluggish match between the Japanese Air Force and the A.V.G.-R.A.F., combination continued over Northern Burma.  The Japanese now had an estimated 14 air regiments spaced in Southern Burma and Thailand with a strength of between 400 to 500 planes.  This compared with about 30 serviceable fighters and a dozen Blenheim bombers of the Allied force.
In summing up the results of the Burma campaign, Chennault says:
"In his official report on the Burma campaign Air Vice Marshall D.F. Stephenson had this to say of the A.V.G.:
'In the Burma campaign the main brunt of the fighting was borne by the P-40 squadrons of the American Volunteer Group.  They were first in the field with pilots well trained, and good fighting equipment.  The great majority of enemy aircraft destroyed in Burma fell to their guns.  Their gallantry in action won the admiration of both services'."*
JAPANESE OCCUPATION
After the Burma campaign ended with the capture and occupation by the Japanese of that country, the A.V.G. continued its fight against the Japs, first in Western China and then in Eastern China.
The A.V.G. was finally disbanded on July 4, 1942.  The group celebrated its final day in the air by knocking down five enemy fighters over Hengyang and escorting U.S. Army Air Forces B-25's to bomb the Japanese air base at Canton.  At midnight on July 4, 1942, the American Volunteer Group passed into history.  In summarizing that history over the preceding year, Chennault states:
"The group that the military experts predicted would not last three weeks in combat had fought for seven months over Burma, China, Thailand, and French Indo-China, destroying 299 Japanese planes with another 153 probably destroyed.  All of this with a loss of 12 P-40's in combat and 61 on the ground, including the 22 burned at Loi-Wing.  Four pilots were killed in air combat; six were killed by anti-aircraft fire; three by enemy bombs on the ground; and three were taken prisoner.  Ten more died as a result of flying accidents.  Although the Japanese promised on their radio broadcasts to shoot A.V.G. prisoners as bandits, they treated our three prisoners as well as regular British and American POW's.  I took it as an indication of the enemy's genuine respect for our organization.
"Most of the group had been decorated by the Chinese government; 10 pilots had been awarded the British and American distinguished Flying Crosses.  My personal awards included the Chinese Cloud Banner and Long Sword of a Commander, the Order of the British Empire, and the U.S. Distinguished Service Medal.  The flashing shark's teeth of our P-40's and our trademark as Flying Tigers were world famous.
CHINA'S SOUNDEST INVESTMENT
"The group had whipped the Japanese Air Force in more than 50 air battles without a single defeat.  With the R.A.F. it had kept the port of Rangoon and the Burma Road open for 2 1/2 precious months while supplies trickled into China.  With less than one-third of its combat strength it saved China from final collapse on the Salween.  Its reputation alone was sufficient to keep Japanese bombers away from Chunking.  It freed the cities of East China from years of terror bombing and finally gave both Chinese and American morale an incalculable boost at a time when it was sagging dangerously low.  All this cost the Chinese $8,000,000 - about $3,000,000 in salaries and personnel expenses and $5,000,000 for planes and equipment.  After the final accounting was made, I wrote Dr. Soong my regrets that expenses had exceeded my original estimates.
"He replied, 'The A.V.G. was the soundest investment China ever made.  I am ashamed that you should even consider the cost'."*
PRESIDENT PRAISES GROUP
In April, 1942, President Franklin D. Roosevelt wrote of the American Volunteer Group:
"The outstanding gallantry and conspicuous daring that the American Volunteer Group combined with their unbelievable efficiency is a source of tremendous pride throughout the whole of America.  The fact that they have labored under the shortages and difficulties is keenly appreciated . . . "
After the American Volunteer Group was disbanded on July 4, 1942, the China Air Task Force of the United States Army Air Forces, commanded by General Chennault, officially took over air operations in China.  In early March, 1943, the 14th Air Force was activated under the command of Chennault and replaced the China Air Task Force.  Chennault remained in command of the 14th Air Force  until the end of July, 1945.  General Chennault formally retired from the military for the second time in October, 1945.
*Quoted portions from Way of a Fighter 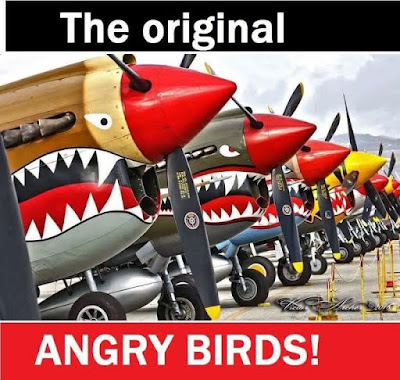 This Pic was snagged by me from one of my leads that had this pic as a screen saver on his computer.

Posted by MrGarabaldi at 9:08 AM