Some thoughts on the recent "Hacking" kerfluffle..

I know that everyone has heard of the recent CIA report about the Russians hacking the American election process.  If this is so, than this is an issue.  I do have several thoughts on this.  As I understand it, the CIA released a report that suggested that the Russians "possibly" interfered with the election process and the Left positively exploded, "A-ha...The Russians interfered with the Election process."  For starters, the CIA has no mandate to operate on domestic soil and the U.S. election is a domestic event.  If there was a problem, it would be the F.B.I that is supposed to handle this.  Also the 17 different intelligence agencies don't back the assertion that the Russkies did the hacking.   It is funny that the left is glomming on the CIA report when in the past they derided what ever the CIA said and Obama openly funded Benjamin Netanyahu opponents in the Israeli election in violation of U.S. Law and nothing came of this so I have a credibility problem.  Also why is that the people that hacked the DNC and Hillary's home brewed server left no tracks but these people left tracks that said "Russians".  Somehow I have a problem with this. it smells of "false flag" but what do I know, I am just a deplorable airplane mechanic. 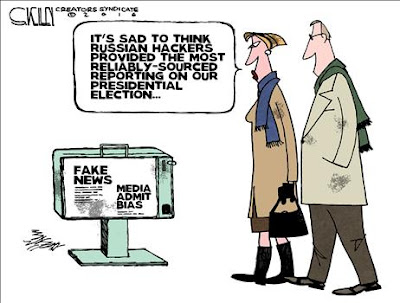 On a slightly different note, I noticed that the same people that glommed on this story are the same one that decried "False News", you know the news that the mainstream media peddled to cover for their chosen candidate,   These democrats are in denial, they keep looking for reasons why they lost besides the obvious one....their candidate sucked big time.  The Democrats pushed a crooked, disbarred lawyer that was more known for her temper tantrums, and running roughshod over people especially if she don't like them, and the pay for play schemes that she had while she was SEC of State.  And the democrats are upset that the Russians might have influenced the elections, kinda like the DNC screwed over Bernie Sanders and the funny thing is that if Bernie Sanders was the Democrat nominee, he would have beat Trump so we can thank the democrat political machine for nominating a crooked mean vicious women whose sole value was "I have a vagina and it is my turn"  the identity politics bit the Democrats in the ass and they won't admit it.  They have to blame everything from Russians, alt news, voting laws and many other reasons except that they screwed the pooch with the American public.  The Democrats forgot their core voters, the middle class voters that are looking to better themselves, instead they became the politics of "Gender, Victim-hood and identity politics."  well the average man and women were tired of all the crap out of Washington and yanked the voting lever for somebody that had their voice and the choice shocked the political world.
Posted by MrGarabaldi at 6:55 PM

Email ThisBlogThis!Share to TwitterShare to FacebookShare to Pinterest
Labels: election 2016