A couple of goings on, I went to a Band performance of my son's High School Band, and they won, they were the "Grand Champions" of the competition.  I recorded the video and disregard the occasional yelling, the parents are very enthusiastic, LOL, .
I went and found the performance on Youtube, My recording because of the wind picked up the video, but I lost a lot of the sound.   Here is the performance "The Last Train Out"


According to my son, even with the audio limitations, he said that it was a better video.
My blog buddy the "GodFather" Old NFO, whom is a class act by himself but we don't tell him this BTW.  Old NFO published a book called "The Morning The Earth Shook", The book talked about the Calexit movement from the Military point of view around San Diego after California seceded from the United States.   The book was well received and rated well.  Well Old NFO mentioned to me that he was thinking about doing another book with other people writing stories based on the book.  I was intrigued and came up with a story and sent it to Old NFO whom edited my random brain squeezing into a workable story.   I was totally humbled that my story made the cut, the people in that book are very good.   Go buy the book Calexit "The Anthology"


I cut and pasted this from the Amazon link

When California declares independence, their dreams of socialist diversity become nightmares for many from the high Sierras to the Central Valley. Follow the lives of those who must decide whether to stand their ground, or flee! 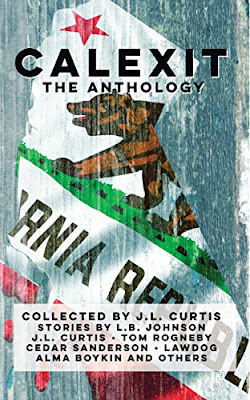 In San Diego, the commander of Naval Special Warfare Group One finds his hands tied by red tape, even as protesters storm the base and attack dependents.
In Los Angeles, an airline mechanic must beg, borrow, or bribe to get his family on the plane out before the last flight out.
Elsewhere, a couple seeks out the new underground railroad after being forced to confess to crimes they didn't commit.
In the new state of Jefferson, farmers must defend themselves against carpetbaggers and border raiders.
And in the high Sierras, a woman must make the decision to walk out alone...