The famous bayonet charge during the Korean War.

When I was in basic training and the drill sergeants talked to us about bayonet fighting and how to use it, they talked about the Korean War when a couple of American Army platoons routed a large group of Chinese off a hill with just the bayonet.  They told us that the Chinese had circulated a piece around their army that the Americans were afraid of the bayonet and hand to hand combat.  Colonel Millett was attacked in 1951 and rather than bunker in, he and his men fixed bayonets and totally routed the Chinese.  The Drill sergeants also told us that we need to know how to use the bayonet, because if we run out of ammo, we will need to know how to fight with the bayonet to survive or if we die, to at least take a couple more with us.  So we trained and trained with the bayonet.  We were the first cycle of trainees in the 80's to get the bayonet training after it was removed in the 70's due to congressional and public pressure.  We always had the bayonet on our rifles, they had the scabbards on them, but they were fixed. 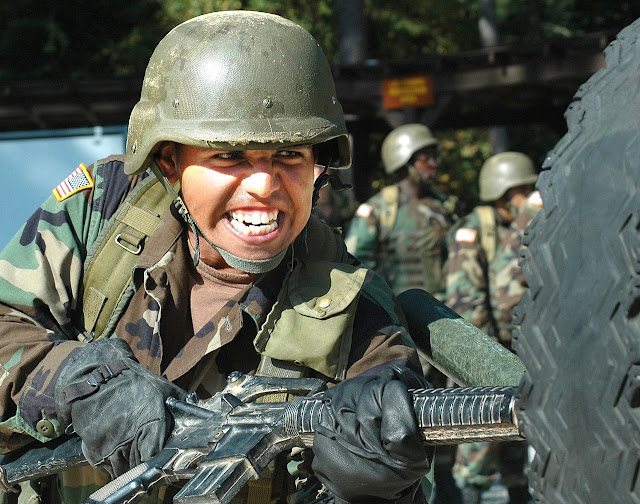 We got used to the weight and got pretty good with the bayonet, from block and parry to high, medium and low strike or the ever popular buttstock smash. 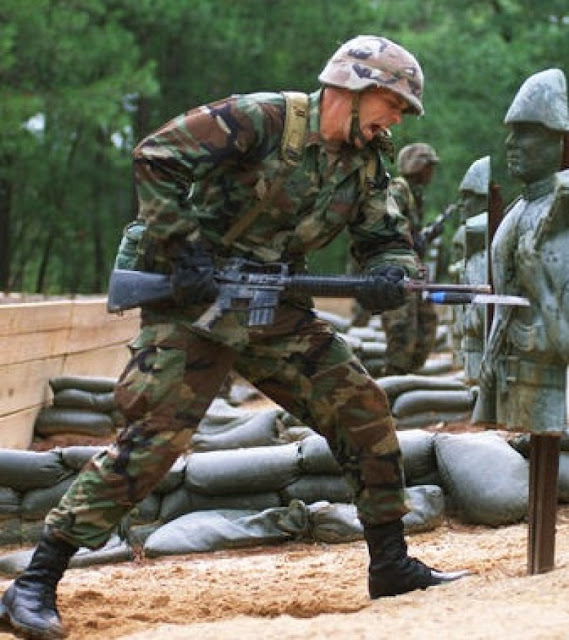 Even now once and a while I will affix a bayonet on my rifle and go through the motions.   I honestly believe some people will get real careful if they have to worry about somebody sticking them with a bayonet and swishing things around.
Well anyway it took a bit of time for me to find the story about that the famous bayonet charge was that the Drill Sergeants were referring to, and here it is. 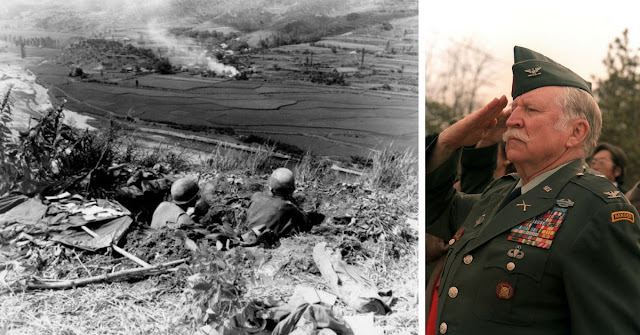 The grizzled-looking redhead, complete with a handlebar mustache, charged with his men. Their enemy did not stand a chance as they had very sophisticated weapons – the bayonet.
Lewis Lee Millett Sr. was born on December 15, 1920, in Mechanic Falls, Maine. His grandfather had served in the American Civil War, while an uncle had fought with the 101st Field Artillery Regiment of the Massachusetts Army National Guard during WWI. Millett joined the Massachusetts National Guard in 1938 while he was still in High School, enlisting in his uncle’s regiment.
The following year, Germany invaded Poland, ushering in WWII. By 1940 Millett was in gunnery school with the US Army Air Corps. In 1941, frustrated by America’s reluctance to enter the war and eager to fight, he deserted. He and a friend hitchhiked across the border and joined the Canadian Army. They assigned him to the Royal Regiment of Canadian Artillery where the training was quite unlike any he had in the US 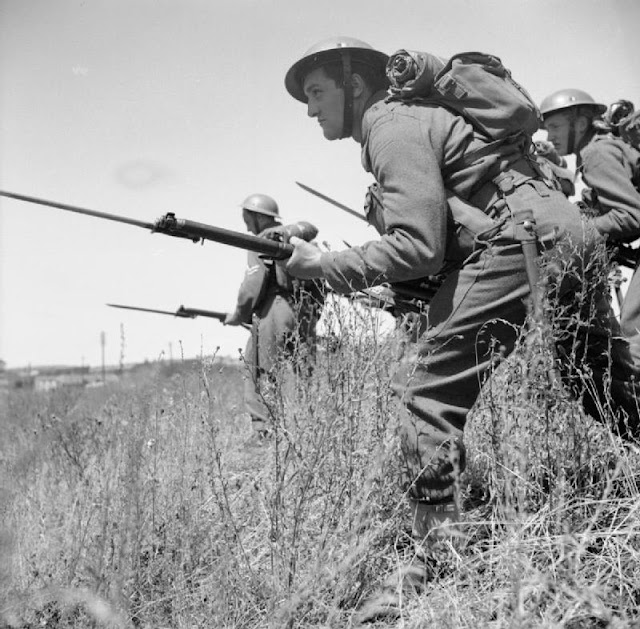 “The Canadian infantry was always doing bayonet training,” he later recalled. “Stabbing straw-filled dummies, parry, thrust, shouting. It made an impression on me.”
Sent to Britain Millett underwent commando training. He was also trained as an anti-aircraft radar operator and was stationed in London during the Blitz – the German carpet bombing of British cities between September 1940 and May 1941.
Following the Japanese attack on Pearl Harbor in December 1941, America entered the war. No longer stimulated by radar work, Millett went to the US Embassy in London and rejoined the US Army. He became an anti-tank gunner with the 27th Armored Field Artillery Regiment, 1st Armored Division.

Millett served in Tunisia in North Africa where he became a hero when his group came under fire, and a half-track truck filled with ammunition burst into flames. He jumped into the vehicle and drove it away from Allied soldiers then leaped off before it exploded. He was awarded the Silver Star – the third highest military decoration.
He later shot down a German Messerschmitt Me-109 fighter plane with a half-track mounted machine gun. Millett, by then a sergeant, took part in the Allied invasion of Italy and saw combat at the Battle of Anzio (January – June 1944) that led to the capture of Rome.
While he was serving in Italy, the Army found out about his desertion. Despite Millett’s achievements, heroism, and medals, the army did not take kindly to deserters. He was court martialed, convicted, ordered to pay a fine of $52 ($810 in 2017 values), and denied leave.
Just a few weeks later he was promoted to the rank of second lieutenant and given a battlefield commission. Fortunately, he survived the war and returned home to a hero’s welcome. Millett then went to college. In June 1950 while in his third year, the Korean War broke out and he was called up.
By 1951 Millett was in Korea as a captain and commander of Company E, 2nd Battalion, 27th Infantry Regiment.
On February 7, his company was in the province of Chungchongbuk-Do, South Korea near the village of Soam-ni. Their goal was the top of Hill 180 where today the Osan Air Base is located.

In the ferocious fighting of early 1951, Millett recalled reading a document that said the Chinese believed American soldiers dreaded hand-to-hand combat, and were fearful of “cold steel

“We’ll see about that, you sons of bitches,” he muttered. At a feature called Hill 180, under grenade and rifle fire, he led two platoons in a bayonet charge up the hill. 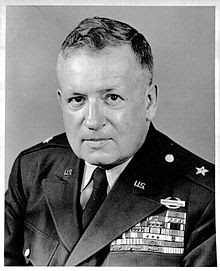 SLA Marshall
Millett led the way and routed the Chinese. His Medal of Honor citation reads: “His dauntless leadership and personal courage so inspired his men that they stormed into the hostile position and used their bayonets with such lethal effect that the enemy fled in wild disorder.”


In the Vietnam war, Millett was involved in a clandestine intelligence program aimed at subverting and killing Viet Cong in the countryside. He retired in 1973 when he felt the U.S. was abandoning South Vietnam.
He once told an interviewer: “I believe deeply in freedom. I’ve fought in three wars, and volunteered for all of them . . . I believe as a free man it is your duty to help those under the attack of tyranny. It’s as simple as that.”
Lewis Millett, old soldier, died on Nov. 14, age 89: 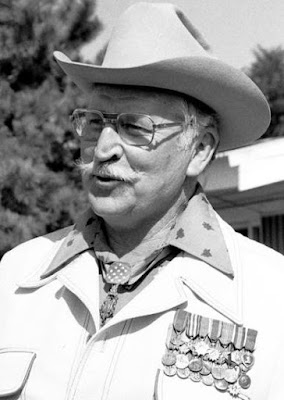 Millett’s impressive military awards include the Medal of Honor, the Distinguished Service Cross, the Silver Star, two Legions of Merit, three Bronze Star Medals, four Purple Hearts, and three Air Medals. In 1973 he retired from the military as a colonel.
Posted by MrGarabaldi at 6:00 AM