I have blogged extensively about Battlecruisers, like I said, this is funny coming from an Army guy, what can I say.  I was fascinated by combat ships since I was a kid.  I will add the most famous battlecruiser in the world, the HMS Hood.  People forget that the Hood was a battlecruiser, and she exemplifies the attributes of a battlecruiser and the weaknesses that ultimately sank her  when she went up against the biggest battleship the Germans had, The SMS Bismark.   I had fun doing research on this post :) 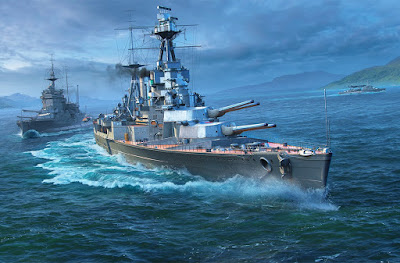 HMS HOOD
Their capabilities allowed them to fill three roles. They could work with the dreadnoughts in the main battle fleet, adding extra firepower. They could form the heart of smaller squadrons, or they could act independently, their speed and firepower enabling them to contribute to the war without support from other ships.

In 1909, the Royal Navy was the first to launch battlecruisers. The faith the British placed in the ships was reflected in their names – the HMS Indomitable, Inflexible, and Invincible. They had a displacement of 17,250 tons, similar to the original HMS Dreadnought, but thinner armor to allow for greater speed. Each one carried eight 12-inch guns, just short of the ten 12-inch guns carried by most dreadnoughts.
The first batch of battlecruisers was followed by another set of three carrying similar weapons. Then a process of escalation began, as the designers tried to fit them with ever-greater firepower. The HMS Tiger, a unique battlecruiser laid down in 1912, carried eight 13.5-inch guns. The Renown and Repulse, launched at the height of the war in 1916, had six guns each, but they were powerful 15-inch weapons.
By 1917, the Royal Navy had built 12 battlecruisers, more than any other nation.

Britain’s first battlecruisers were designed and begun in secret, during the naval arms race. Even when they were launched, not every nation rushed to imitate Fisher’s innovation. By the start of the war, only Britain, Germany, and Japan had battlecruisers in action. 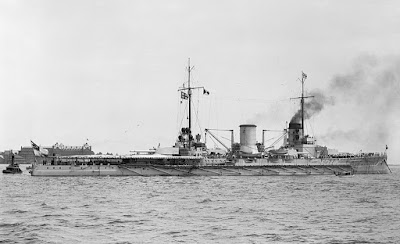 SMS Moltke
The First German battlecruiser was completed in 1910, and several more were produced during the years that followed. While sticking with the broad outline laid out by Fisher, the Germans brought a slightly different approach to battlecruisers. They placed less emphasis on speed and firepower, giving their battlecruisers instead better armor than the British ones. Their first battlecruisers carried 11.1-inch guns although ships built later had the 12-inch guns the British had started with.
The Japanese could not afford to produce as many ships as other powers, so they chose to focus on quality over quantity. Their Kongo-class battlecruisers had their design changed to incorporate 14-inch guns. They also had slightly heavier armor than the British ships. The first Japanese battlecruiser was built in Britain while they were allies; later ships were produced in Japan.


At first, the battlecruisers were successful. At the Battle of Heligoland Bight in August 1914, they turned the tide of battle in favor of the British by sinking three German light cruisers. While on detached service in the Falklands in late 1914, the HMS Inflexible and Invincible sank two less-powerful German cruisers, confirming their role as destroyers of light ships.
German battlecruisers were sent out on some successful independent expeditions. They bombarded towns on the British east coast, raising concerns among the British public about the Royal Navy’s ability to protect them. The Germans gave a battlecruiser, the SMS Goeben, to the Ottoman Empire. It contributed to bringing the Turks into the war and helped them fight against British and Russian fleets.


However, the successes concealed problems with the battlecruiser design.
One of the biggest issues was that the captains of the ships regarded them as suitable ships of the line. With their large size, heavy armament, and impressive label, commanders mistakenly tried to use them in straight fights against dreadnoughts and other battlecruisers. Their armor, reduced to increase their speed, was not designed to withstand the sort of guns those ships carried.
In May 1916, the Battle of Jutland laid the truth bare for all to see. Single salvos of shells proved enough to sink three British battlecruisers, the Indefatigable, the Invincible, and the Queen Mary. Each was blown apart and sent into the depths. On the German side, the Lützow was sunk, and other battlecruisers limped home. 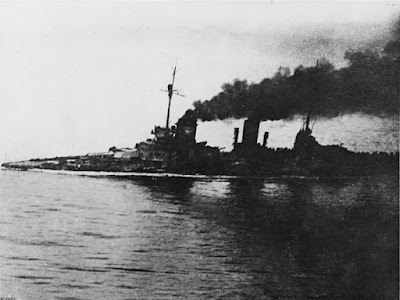 SMS Seydlitz steaming home severely damaged after Jutland
A combination of good seamanship and precautions introduced to contain explosions stopped more from being lost.
Battlecruisers had faced a major battle, and their weakness had been exposed.


Fortunately, another machine emerged to serve part of the role filled by battlecruisers. The growth of naval aviation created an alternative way of providing reconnaissance for battle fleets.
No more battlecruisers were lost during WWI, as both sides learned the lessons of Jutland and used them appropriately. The Royal Navy used the Royal Navy Air Service with Sopwith Pups and also non Rigid Airships to provide reconnaissance for the Home Fleet during the blockade. 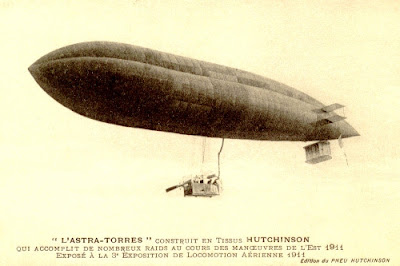 Following the war, there was still some interest in building battlecruisers, although with a different design. Then the Washington Naval Treaty of 1922 brought a halt to the naval arms race, and interest in battlecruisers evaporated. By the time naval power began to grow again, designers had moved on to improved options.
Ultimately, battlecruisers were too vulnerable for ships of their size and firepower.
Posted by MrGarabaldi at 7:00 AM