I attended my second NRAAM in the great city of Dallas; 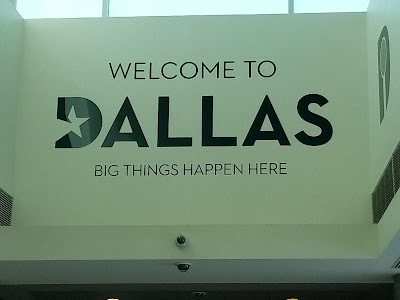 I flew into Love field on Saturday morning and flew out Sunday Morning.   I learned a few things...First off I should have planned a Friday trip and return on Sunday Trip.  I couldn't change the airline tickets,  I bought these tickets at a huge discount and the flip side is that once I buy them, they are set in concrete.   Because of that I couldn't change my hotel room either.  Oh well, lesson learned on the planning side, I was trying to go as cheep as I can and as the phrase goes "Penny wise, pound foolish".   Next year I will plan on 2 nights.
Well anyway I met the "GodFather" Old NFO at NRAAM, now let me tell you...That guy knows EVERYONE, if he don't know you, I betcha he knows someone that knows you.  I also met a bunch of other people like Lawdog, you know the same guy that came up with the "Cake Meme" that I use on a regular one...Lemme find it for you...

Yeah, that one...He says that he gets a bunch of hate mail on it.  To me that shows how effective it is when the liberal gungrabbers are butt hurt.  I also have bought both of his books and let me tell you, the story on the books are tame to meeting the guy in person.  He is truly a class act and a slightly warped sense of humor .
As far as the venue goes, I and my son walked through Dallas, caught the "DART" or the Dallas area rapid transit  system and it was laid out differently and man everyone was nice and friendly to us, especially when it was obvious that we are "out of towners".  Unlike the sullen indifference I get here in the ATL.  I was looking for protestors, where were the protestors?..I was expecting to get swarmed by antifa or some of the other idiots, and with the exception of a couple of police on the corner all I saw were the members headed into the convention center.   I was armed, I had for the trip bought a little Pelican case to transport my pistol.  I had read up on the rules, I being a GA CCW permit holder, Texas recognized my permit so I could carry on the rail system, and in the convention center.
The convention center had the usual big names there... 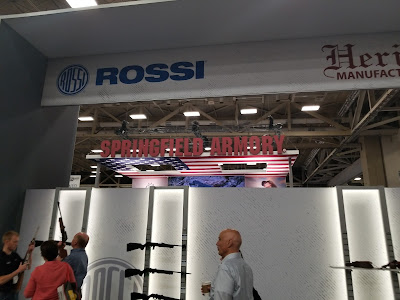 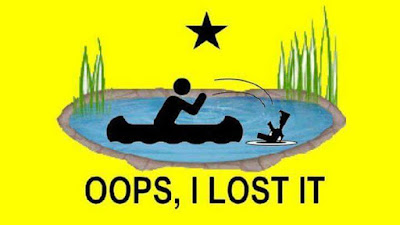 It was a bit different, there were a bunch of women there, and according to Lawdog, one lady was giving the Glock rep fits about their gun policies and she was articulate, and reasonable but she had that guy squirming.   He was pleased, you can read about it and others on his blog.
I and my son walked around and ran across this place, again... 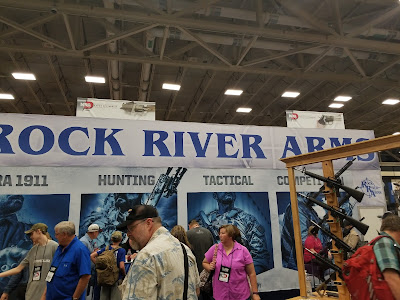 he and I got a T-shirt, the only place that I am aware that you got "free" T-shirts.  Swag was far lower this year than last year, don't know what is up with that.    I did buy a couple of things, I was talking to the guy running this vendor stall.. 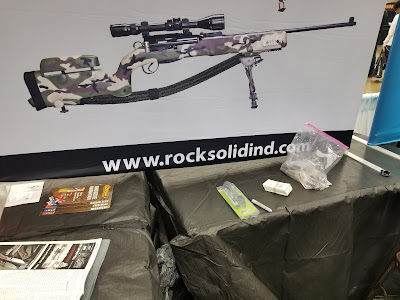 And I was checking out the actions on these rifles and they were like glass and they were Mosin Nagant rifles, I was shocked.  The guy running the booth told he how he did it, he had explained that the rifles were buried in Russian cosmoline for 70 years in many cases and the metal had absorbed the cosmoline.  He told me how he got the cosmoline and how he polished the action up on the Mosin Nagant rifles,   I will try what he suggested in a few weeks when I have my Honey do list knocked down.  I did buy some stripper clips for $20 and he gave me some new set screws that accepted the hex key vs the older ones that used the flat tip screw driver.  To me the advice was worth the $20 so I had no problem buying the stripper clips for my Mosin. 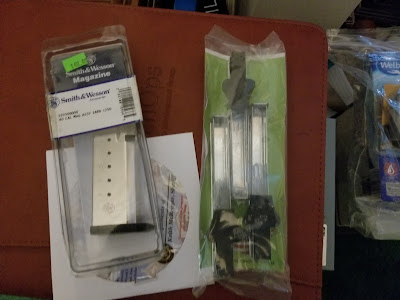 I also bought a regular magazine for my Smith Sigma, I have a couple of magazines but they are the "capped" 10 round magazines.   I may try to experiment and grind the stop off the  capped magazine.
I also saw some furniture that was "unique", and I wonder of the spousal unit would think of this addition if I had bought it. 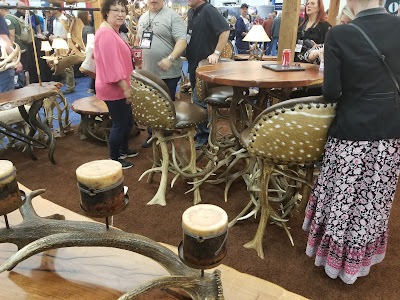 I suppose I could move it to the dog house.....LOL   Well anyway I also saw this for people wanting to keep their pistol within easy reach.... 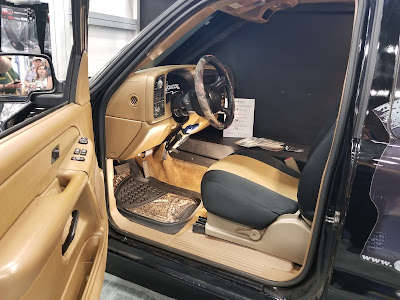 There is a pistol strapped under the Steering column.

The NRAAM was an enjoyable visit,  We did have to help Old NFO find his car, he was gracious to give my son and I a ride so we didn't have to use the transit system.  I met some new people at a place the bloggers congregated at after the meet.. 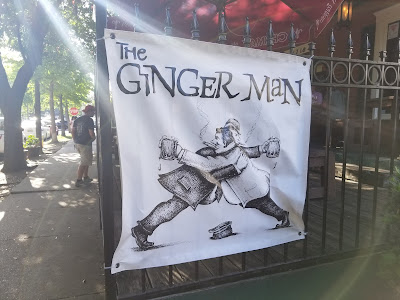 It is what I call a "Beer Bar", Since I don't drink, I just ordered "Tea" and we did damage to the assorted, breads, cheese, salami and pretzels.   It was a good get together and I talked to people that I have met online and never in person until now.   We were there for a while swapping stories and having a good time   I really enjoyed the camaraderie and I am looking forward to Indianapolis 2019.  This time I will plan my trip better, LOL

Posted by MrGarabaldi at 6:17 PM