The Dornier Do 335, a very unique airplane and a piece of history.

Several years ago I and my son went to the Udvar Hazy museum right outside Dulles and it was full of interesting airplanes, Here is my son back in 2012 at the Museum.  I had Blogged about the place several times. 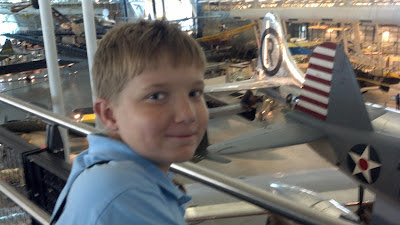 I remembered seeing this weird Piston airplane with the pusher and puller configuration there and I remembered the plane, I had an airplane model of that same airplane in the 70's.  I thought it was some concept airplane or something until I actually saw her at the Museum.  I was surprised and the image brought back memories.  That was a unique airplane and it survived. 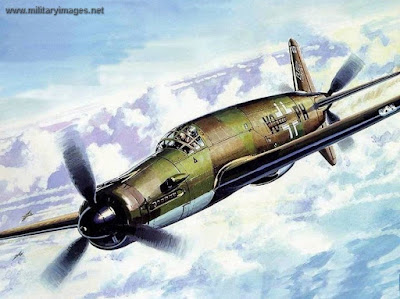 Air power first became a significant part of warfare during WWI, but it was in WWII that it came to the forefront. Long range bombing allowed nations to attack each other’s industrial bases. Fast attack fighters let them fight back. Air power was used to support ground offensives and challenge enemy power at sea.
Following the fall of France, the war in the west was largely between Britain and Germany, and air power was central.
The armies of the two nations were facing each other on the ground in North Africa. The Germans had support from the Italians, and the British were aided by imperial forces and ex-imperial Allies. The North African war did not directly threaten Britain or Germany. The air war did. This made it crucial both in strategy and for morale
The RAF and the Luftwaffe initially approached the war with very different mindsets.
Successes late in the First World War had shown the Germans the value of sharp, decisive tactical strikes. Air support had played a part, with the German air force bombing and strafing Allied targets as the German infantry made breakthroughs in their spring offensive.
That experience fed into the Blitzkrieg tactics used by Hitler a generation later. The primary role of the Luftwaffe was to cooperate with the army, helping to achieve success on the ground. It was how they had been used in the swift conquest of Poland.


The RAF, on the other hand, were geared toward acting independently from the army. Bomber Command provided a long-range strike force capable of targeting the enemy at home. Fighter Command provided support for the bombers and defense for the homeland. The Trenchard doctrine, which had dominated since the previous war, stated heavy bombing alone could win a war if the RAF committed to it.
In the end, both sides used elements of both strategies. Plans to invade Britain forced the Luftwaffe to become a long-range strike force, acting independently of the army in the Battle of Britain and the Blitz.

During the Second World War, the Dornier company was building a radically different airplane, the Do 335 Pfeil (“Arrow”).

Having a unique “push-pull” layout and a reduced aerodynamic drag of the in-line alignment of the two engines; one at the front of the plane, and one in the tail.
The Do 335 was one of the fastest piston-engine airplanes of the war, being capable of reaching speeds of 474MPH. The first prototypes were delivered in May 1944, and they were quickly taken into production. However, as happened so often with the Nazis miracle weapons, that was far too late in the war to change the tide.


In January of 1945, the first planes were delivered to the frontline units, but when the factory was overrun in April of that year, only 11 had been completed.
The first combat encounter of the Do 335 was claimed by French ace Pierre Clostermann when he intercepted one in April 1945. Clostermann was leading a flight of four Hawker Tempests from No. 3 Squadron RAF over northern Germany when they saw a Do 335 flying at maximum speed at treetop level.
The German pilot reversed course after spotting the Allied fighters and managed to escape, even though the Tempest had a top speed of 432 MPH.
Only one Do 335 survived the war; it was taken intact in the factory on 22 April 1945 and transported to the United States for testing and evaluating.


After these tests, it was left to rot outside for years until it was first donated and later transported to the National Air and Space Museum. By a strange quirk of fates, in 1974 the plane was transported back to the factory in Germany to be restored. Some of the men who built it in April 1945, were now restoring her; what are the odds of that happening.
After restoration, the plane remained in Germany until 1986 when it was transported back to the United States. You can now visit her in the Steven F. Udvar-Hazy Center of the National Air and Space Museum.

Posted by MrGarabaldi at 5:22 AM