I made a booboo

This along with 2 older post are scheduled to drop on my scheduler thingie. since I am out of town in Tennessee visiting my mom and my pops.

Several weeks ago I had gone to meet a good friend of mine at a city south of where I live, we met at a diner in the small city in the middle of the state.  I was there as was my wife and my son.  It was a good visit.  We were talking about many different subjects and he happen to mention that he bought a new pistol, a Sig and he had a new holster and pulled it out of his briefcase and showed it to me and I with out thinking about it pulled put my "Smif" holster and all and held it like this...and compared it to his holster, and it was a very nice holster made with some really exotic leather 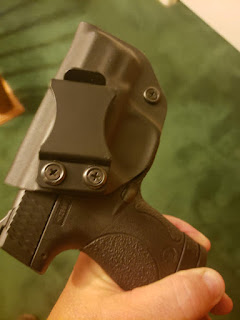 This is how I held the "smif"
then put it back on again.  Didn't think about it until we were leaving, and I happen to see one of the waitresses, she was terrified, All I could see were her eyes, she was wearing a hat and a mask, her eyes wide open and pinging back  and forth at me and everyone else.  I immediately felt like crap.  I had made a subconscious assumption that everyone is "people of the gun" because it was middle Georgia and everyone are "country people" and everyone else acted normal except her, and it did bother me immensely.   I try to be very considerate of other people because you don't get converts if you scare the crap out of people and I am called "Mr. Manners" by my wife, I can't help it, I try to be polite to people at all times unless they are dicks then the manners stop.  I was troubled by this and my wife picked up on it and I explained what happened and she responded that she didn't even notice and I replied "Well I did and I feel like crap because of it"   I am troubled because I scared the shit out of someone by my having a braincramp.  I berated myself for my momentary mental slipup and swore I wouldn't screw up again.  Perhaps I didn't do anything wrong, but in my mind I messed up and embarrassed "the people of the gun" by my poor manners.
Posted by MrGarabaldi at 8:00 AM

Email ThisBlogThis!Share to TwitterShare to FacebookShare to Pinterest
Labels: 777