Blogging has been Sporadic because I have been more housebound doing house remodeling stuff.
, I had enough time to read my blogroll in the morning as I drank my coffee, before I started working on the house.  I am still on Furlough for another month, It is strange being home, I am not sure if I like it.  If this is what retirement is like, I may work until I die...Only time will tell.     I have been enjoying the run of songs, I never had a theme last this long, and I am  really enjoying it in a weird sort of way,   I have several more weeks in mind, perhaps longer.  As long as I can flog er work the muse, I will, and for some reason Disco really plays well with this theme of songs for some reason.     I am continuing my string of "bugaloo" songs.  This discussion was started in the "Monster Hunter Nation, Hunters Unite", back in December? it is a Facebook group with enthusiast of the ILOH "International Lord of Hate" A.K.A Larry Correia.  We were talking about what song would we use if we looked out of our window or glanced at our security camera and saw this.....

"Disco Inferno" is a song by The Trammps from the album of the same name. With two other cuts by the group it reached number one on the Billboard Hot Dance Club Play chart in early 1977, but had limited mainstream success in the U.S. until 1978, after being included on the soundtrack to the 1977 film Saturday Night Fever, when a re-release hit number 11 on the Billboard Hot 100. 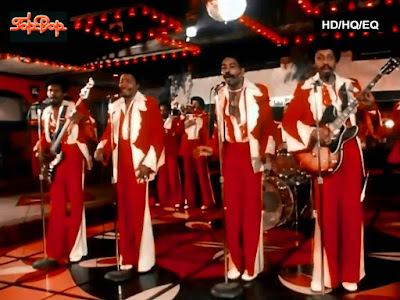 The song was originally recorded by The Trammps in 1976 and released as a single. It was inspired by a scene in the 1974 blockbuster film The Towering Inferno in which a discotheque is caught in the blaze. According to Tom Moulton, who mixed the record, the Dolby noise reduction had been set incorrectly during the mixdown of the tracks. When engineer Jay Mark discovered the error and corrected it, the mix had a much wider dynamic range than was common at the time. Due to this, the record seems to "jump out" at the listener. With "Starvin'" and "Body Contact Contract", it topped the U.S. Disco chart for six weeks in the late winter of 1977. On the other US charts, "Disco Inferno" hit number nine on the Black Singles chart, but it was not initially a significant success at pop radio, peaking at number fifty-three on the Billboard Hot 100.
"Disco Inferno" gained much greater recognition when the 10:54 minute album version was included on the soundtrack to the 1977 film Saturday Night Fever. Re-released by Atlantic Records, the track peaked at number eleven in the U.S. during the spring of 1978, becoming The Trammps' biggest and most-recognized single. Later, it was included in the Saturday Night Fever musical, interpreted by the 'DJ Monty' in the "Odissey 2001" discothèque.
The song also became an unofficial theme song for former New York Yankees outfielder Bernie Williams. It was often played at old Yankee Stadium while the scoreboard and video systems displayed the phrase "Bern Baby Bern", a play on the song's refrain and Williams' first name.
In 1996, "Disco Inferno" was included on the soundtrack to the cult comedy film Kingpin and featured in two pivotal scenes in which Roy Munson (played by Woody Harrelson) confidently strolls into a bowling alley. The song was also used in the trailer to the Adam Sandler comedy Bedtime Stories. In 2006, the extended version was featured on a remastered version of the Ghostbusters soundtrack.
On September 19, 2005, "Disco Inferno" was inducted into the Dance Music Hall of Fame
There is something about the pageantry about the bands during that time..