I figured it would scar the alphabet boys if they come busting in and hearing a song about people standing for their beliefs and willing to fight for them no matter the cost, Good Music  unlike that crap they listen to now.  What can I say, My humor is warped....just a bit. Next week will be "Desperate, But not Serious by Adam Ant"  Now that should really cause some psych evals., hehehe, some poor ATF guy trying to explain the attraction to his mother because he is imaging himself as The savior of the American way rather than working for an agency that have the initials of a convenience store.

Emerald is a song by Thin Lizzy from their 1976 album Jailbreak. It is inspired by traditional Irish music and utilizes a 6/8 rhythm. The guitar riff uses an "Irish" melody with its use of triplets.  This song was recommended by "Bad Frog" one of my readers. 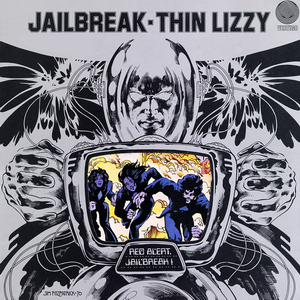 After their previous two albums, Nightlife and Fighting, failed to generate sales, Thin Lizzy were given one last chance by their label, Vertigo Records. The band wrote songs and collected ideas in a studio in Buckinghamshire in late 1975, then convened at Ramport Studios in London in the new year. The band selected John Alcock as their producer, as he had worked in the studio extensively. The band worked diligently through February on the album. However, guitarists Scott Gorham and Brian Robertson felt that the speed at which it was completed adversely affected its quality. Both stated that the tightness of the songs made the album feel rigid. In particular, Robertson said he would have liked more freedom to improvise his lead guitar parts. Gorham also criticized Alcock's production, saying that he didn't particularly care for his guitar tone on the album.

"When I wrote 'Warriors'…" frontman and songwriter Phil Lynott remarked in 1976, "the only way I could give any sense of heavy drug takers was by describing them as warriors; that they actually go out and do it. People like Hendrix and Duane Allman were perfectly aware of the position they were getting into. They weren't slowly being hooked. It was a conscious decision to go out and take the thing as far as it can go."

Initially, the song "Running Back" was chosen to be a single ahead of "The Boys Are Back in Town", the latter being seen as possibly too aggressive for some radio stations to play. Lynott and producer John Alcock decided to employ session musicians to add more commercial elements to some of the tracks and try to produce a hit single, so Tim Hinkley was brought in to add keyboard parts to "Running Back". Robertson was against the idea, as he liked the song as it had originally been arranged, in a blues format with his own additions of piano and bottleneck guitar. He later said, "I took enormous offence to [the changes]. I couldn't understand why they'd pay this guy a fortune just for playing what he did. Listen to it and tell me it's not bollocks." Robertson did not play on the finished version of the song and Hinkley is not credited on the album sleeve. Lynott said at the time that "Running Back" was "very much influenced by Van Morrison. I really like that song." Hinkley later recalled, "Robbo and Scott were not keen on it at all but they were overruled." Thirty-five years later, Robertson recorded his own versions of the song on his 2011 album Diamonds and Dirt.

Scott Gorham also revealed that "Romeo and the Lonely Girl" was also brought up as an option for a single, but was ultimately discarded, as "nobody was overexcited about it. 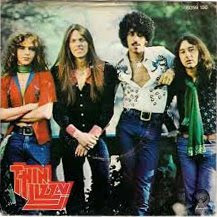 In a retrospective assessment for AllMusic, Stephen Thomas Erlewine describes Jailbreak as a "truly exceptional album", with "a dimension of richness that sustains, but there's such kinetic energy to the band that it still sounds immediate no matter how many times it's played". Highlighting Lynott's songs as "lovingly florid... crammed with specifics and overflowing with life", he says that Gorham and Robertson's guitar work is "intertwined, dual-lead guitar interplay that was one of the most distinctive sounds of '70s rock".[6] In his review Martin Popoff described Jailbreak as "the band's last album where eclecticism outweighs the cohesive signals" which made later releases "much more singular in intent". He praised "Gorham and Robertson's sharpest metal to date" and remarked how the album is made of "a coterie of songs that very often struck the same emotional heartstrings of Springsteen.