My Self Defense Story (Reposted)

I had originally posted this back in January of last year and I thought it was worthy of repost due to the subject matter.

I got this idea from ""Mysterious Blogger"(LOL), a fellow blogger that Hangs out at his blog at 75 Million Pissed Off Patriots,   he had another blog that had to "vanish" due to butthurt lefties so he totally revamped himself.  Don't research him, just enjoy the blog, it is a good blog and on my blogroll.  He had talked about his self defense story.  The first time I had to "display" a gun to frighten off a potential Threat was in the early 90's.  I was a manager at Domino's Pizza in a town the next county over where I live at now.  A bit of background, when I got out of the service in 1991, I got a job with Kawneer as a door fabricator.  You look at the bottom center of the door, if it is a metal door, usually with glass and what not, but it will have a label that looks kinda like this: 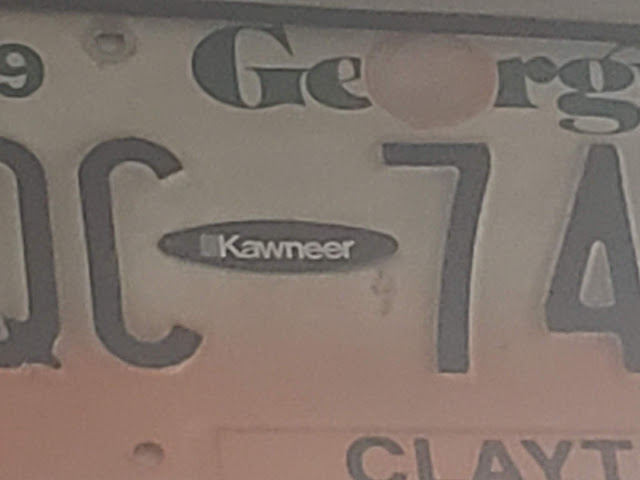 I kept my license plate from my first F150, I snagged the logo during a break.  Well anyway, I was working Kawneer and there was a job slowdown and the entire 2nd shift was laid off.  I was pissed, we did 2 times the work as first shift, but they were union and we were not, we got the axe.  Well I had started working at Domino's Pizza as a driver and was offered a management job.  I got transferred to the store in another county because they needed an assistant manager and off I went.  Well shortly after I got there someone broke into my 1991 F150 and stole my Springfield govt model .45.  I had used it in single stack competitions in Europe.  I was pissed off, that was a good 45 and I still know the serial number.  Well for months afterward I had visions of walking out of the store and seeing the other end of my .45.  I had bought the 45 and my Ruger P89 at the Nellingen Rod and Gun Club in Germany.  Well since then I had a habit of keeping my P89 in the store with me, yes it was in violation of Company policy but I didn't care.  Well one day I had just closed the store and there was a tapping on the glass and there was one of my drivers. he was still in uniform his name was "Gus", well "Gus" was a driver that was drawing disability from the VA for having mental issues. The Store manager had hired him, we were hard up for drivers and he seemed to be ok.   well I let him in and locked the door as he came into the store while I went back to the office to close out the daily report and count the till.  Well when I sat down, I habitually took the Ruger off the desk and sat on it with the butt sticking out.  Well the driver "Gus" came into the office as I was finishing the paperwork for the day and started counting the money to go into the moneybag.  Well "Gus" was talking needing money to buy "some company" if you know what I mean, apparently he knew of a person that sold affection by the hour.  Well he was talking about getting money and visiting her, while I was counting down.  He commented that he was broke and needed some money and I commented while I was counting,"Man I can't help you, I am broke until payday."  He then pointed to the cash I was counting down and commented"What about that?" and I replied calmly..."Naaa.......That belongs to the store,"..By this time I seriously regretted letting "Gus" in to the store, I was picking up some bad vibes from him.  As he kept talking I glanced up at the shelf above my desk and looked at the "HSPP" book, it is "Hourly Sales and Payroll Percentages".  It tracks the sales from the same period last year, it is a tool used by the manager to get a rough draft for labor and sales to plan the schedule and the food.  I recall a year before where a store off Old National Hwy in Atlanta where a manager had his head bashed in with a bat by a driver who proceeded to take the till and when they found him the next day, he had smoked it away in a crack house. but the blood spatters were on the HSPP book so when the store staff got the figures, they had to deal with the dried blood spatters.  Well I was getting the "Deja vu" feeling.  I still acted calm closed up the bank bag and picked up the clipboard where I was putting the daily figures, you know the daily sales, the food percentage and the labor percentage for the day and how they impacted the weekly and monthly figures. We called it the "Daily Keys"  I proceeded to stand up, pick up the Ruger P89... 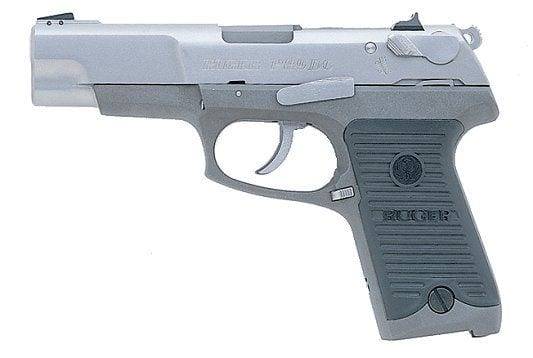 from the chair and put the pistol under the clipboard as I carried the clipboard to the data entry station outside the office and proceeded to enter the "Keys".  Well "Gus" saw the pistol and freaked out, and yelled "What are you doing with a Pistol??!"  I replied as I was entering keys "The pistol is there in case someone tries to rob me when I go to the bank  after I leave the store.."  He ran out of the store.  I quickly followed and locked the door after he left.  I then went over and sat down and knew that I was very lucky, Sure "Gus" didn't physically touch me, but I am convinced that if I didn't have the pistol, "Gus" would have attacked me to get to the store receipts.  and with him being taller than I am and crazy, I have severe doubts on how I would fare in a physical assault.  I stayed in the office for a couple of hours before I left and yes the pistol was in my hand when I locked up the store and headed to the bank and home.  "Gus" came back for his regularly scheduled shift but he avoided me after that and quit a couple of weeks later.  Well the Ruger, I had to sell her a couple of years later to pay some bills.  I regretted doing so but I was desperate to bring in some money.  This was the salad days for me and the soon to be spousal unit.    Even today, I still count myself as fortunate from that incident, it could have gone pear shaped in a hurry, and I was lucky.  I kept analyzing what did I do wrong, well what I did wrong was let him into the store, but in my defense I have done that in the past with other drivers and the company was nice while I closed the store.  I have had to pull a Pistol 3 more times doing pizza stuff this happened after my Ford Assy plant closed down,  I quit when I got my job with my present employer.   After my Ford Assy plant closed down, I delivered Pizza to keep the "Wolf at bay" until I found another "Real Job".   I believed that the law of averages would be against me and eventually I would have to shoot someone to defend my life, every one of my robbery attempts were not in the hood, not in the apartment complexes, not in the trailer parks, they were in the middle class homes that had a lot of section "8" vouchers, you know when you deliver to the house and they have the flashy cars, and TV's, but using lawn furniture inside the house and they don't tip, certain neighborhoods, the houses were rented out because nobody was buying, this was during the 2006/2009 housing recession.  I guess the kids wanted to be like their fellow homies in the hood and boost the "pizza boy" for quick cash, food and "street cred". Well "Pizza boy" carried and was going home to his wife and kid.  And as soon as my present employer hired me, I gave 2 weeks notice. As much as I hated the delivery business, I never burn a bridge.    I didn't enjoy the pizza delivery business anymore and the customers were changing.  Way back when I delivered for the first time in 1985, if you were robbed, they just took the pizza, but in this day and age, they would rob you, take your car and kill you just for street cred.  Smart crooks won't bother pizza drivers because we habitually don't carry a lot of cash, but kids are stupid and impulsive.   I never had to fire my private weapons in defense of my life and I am glad.  But I also am glad that I had the pistols when I did because things could have turned out differently.  Yes I tip delivery drivers exceedingly well because I have been there.

Email ThisBlogThis!Share to TwitterShare to FacebookShare to Pinterest
Labels: gut, pistol, Self Defense