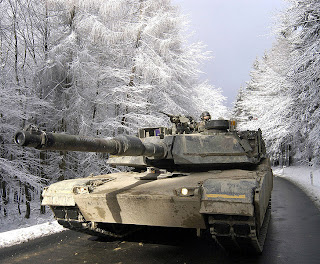 I
I remembered seeing the M1 for the first time on a training area on Hohenfels in Germany.  Anybody that has been in Germany has been to Honenfels or Graf or Wildflicken.  We have seen the M1 Tanks and they are impressive.  I am glad to see the Army upgrading the M1.  Every time in the past, we would go into battle unprepared.  We learned the lessons of the Kasserine Pass where a bunch of American tanks had their asses handed to them by superior German tanks or at the outbreak of the Korean war with Task Force Smith where the American Shermans had problems with the North Korean T34/76 and T34/85 and the IS-2(Josef Stalin) Heavy Tank
The M1's saw their baptism of fire in the first Gulf war and devastated their Iraqi counterparts.  The T-55/62 and the T72M were no match for the M1's.  No matter what other weapon system is deployed, nothing kills a tank like another tank.  In my opinion if we had our own armor rather than relying on the pakastani's or indians during the Battle of Mogadishu we would have been better served.
The M1 has built a fearsome reputation since its initial deployment to the first Gulf War, in the past we always had the inferior tank at the start of any war, with the M1 we finally had a tank that was state of the art.
With the Chinese stirring up problems, the possibility of us facing off against a heavy division of the opponents is possible.  Upgraded Strykers cannot face off tanks.


The Army won’t be sized for big-time wars anymore. American units are going to begin coming home from Europe. There’s a food fight in the works over what roles and missions, including heavy units, sluice down into the Guard and Reserves.
But all that stuff is tomorrow or beyond. Today, the Army is making hay while the sun shines — it’s going forward with its plan to continue improving its flaship M1 Abrams main battle tank.
On Friday, General Dynamics Land Systems announced it had received a $60 million contract to continue work upgrading the Army’s M1A1-variant Abrams tanks to the M1A2 Systems Enhancement Package (SEP) V2 configuration — the king of the jungle. Here’s how GD described them in its announcement:


The most technologically advanced digital tank, the M1A2 SEP V2 includes improved color displays, day and night thermal sights, commander remote operated weapon station (CROWS II), a Thermal Management System (TMS) and a tank-infantry phone.  The M1A2 SEP V2 maximizes the fighting ability of the tank on today’s battlefield while preparing the platform for tomorrow’s challenges. The original order was made under a multi-year contract awarded in February 2008, which authorized the upgrade of 435 M1A1 tanks that have been in the Army’s inventory for more than 20 years.  General Dynamics is continuing the conversion of the tanks in the Army’s active component to the M1A2 SEP V2 configuration.

The question about where those tanks will ultimately end up could become one of DoD’s central questions over the coming year. Everybody loves big, heavy, old-fashioned, rolling-thunder units, ripping up the mud with their treads and shooting the hell out of their targets downrange, but they could start to seem pretty expensive in the austerity Army. There’s a school of thought, broached at last year’s Association of the United States Army trade show and elsewhere, that the Army should move many or most of its active tank units into the Guard and Reserves.
In keeping with the new doctrine of “reversibility,” transferring heavy brigades to the reserve component is the best compromise under the circumstances, advocates might say. If the United States needs to go fight another major land war — which Joint Chiefs Chairman Gen. Martin Dempsey seems to think is quite possible — it will be able to call up heavy units just in case. They won’t be ready as quickly as they might be today, but at least they’d be there. (Besides, what’re the odds of a big force-on-force armor engagement anytime soon in the 21st century?)
On the other hand, although “reversibility” is the new DoD-level buzzword, the Army-level buzzword has long been “balance.” Dialing back some active brigades to zero is exactly the kind of thing Chief of Staff Gen. Ray Odierno and Dempsey, during his brief stint as chief, both warned about. The Army has got to be able to keep its ability to do everything, they argue — with a lower end strength, maybe, but at least in proportion to the rest of the service.
The answers aren’t at all clear, but with hundreds of billions in reduced budget growth hanging over its head, the Army may not have much longer before it must start deciding.