I havn't posted the past few days due to my work schedule, it was brutal this week so I didn't have time to update my blog. 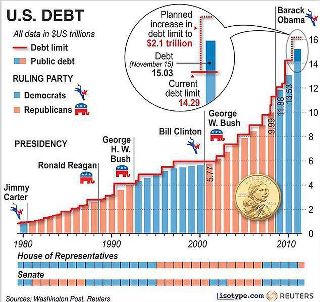 I got this off Boortz

Raining Money
By Neal Boortz
Here’s a number for you: $189,000.  That is the amount of money every man, woman and child in the United States owes on our national debt plus the cost of all of our unfunded liabilities.  I hope that your children and grandchildren are prepared to be wardens of state – existing to fund the dreams and schemes of our federal government and entitlement society.
Here’s another number for you: 2.4%.  That is the average quarterly growth rate of under our Dear Ruler.  You can compare that number to 4.6%, which was the average recovery rate ten quarters after WWII.  That is nearly twice as good as Obama’s recovery.  According to the Wall Street Journal, “the economy has grown by a cumulative total of about 6.2%. Considering that the economy shrank by about 5% during the Great Recession, overall U.S. output is barely greater than it was at the end of 2007.”
One more number from Barack Obama’s legacy: $800 billion.  That number is familiar to you because that is the cost of Obama’s great stimulus plan.  Just to put this in perspective, Obama’s stimulus plan was the largest such spending program in history.  “Adjusted for inflation, it was nearly five times more expensive than the Works Progress Administration. It was bigger than the Louisiana Purchase, the Manhattan Project, the moon race and the Marshall Plan.”  That’s Barack Obama: big government at the expense of your children and grand children
Posted by MrGarabaldi at 10:52 AM