Extravagant party at the White House.

I also read this off Drudge report.   This don't surprise me, the Obunglers have been living extravagantly since they arrived at the white house.  I remember the criticism that Nancy Reagan got from the democrats when she tried to change some stuff in the whitehouse.  Now the Obunglers do all this stuff and I hear silence from the lamestream media and the same democraps. The White House is pushing back against claims from a new tell-all book that staff kept an extravagant, Hollywood-created Halloween Party under wraps due to fear it would create imaging problems.
White House spokesman Eric Schultz said Sunday the event, which was decorated by Tim Burton and featured Johnny Depp in his Mad Hatter role from Burton's acclaimed "Alice in Wonderland," was held for local children from the Washington D.C.-area and for hundreds of military families. 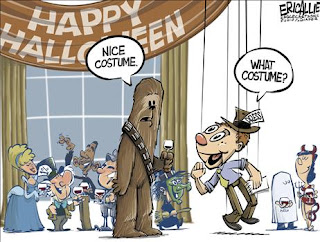 Book Says Obamas Held Lavish ‘Alice’ Party During Recession
Johnny Depp among guests
"If we wanted this event to be a secret, we probably wouldn't have invited the press corps to cover it, release photos of it to Flickr, or post a video from it on the White House website," Schultz says. "Just goes to show you can't believe everything you read in books these days."
In her new book, "The Obamas," author Jodi Kantor wrote that the White House was more than just a little concerned about the way the costume party would affect the public's perceptions.
"White House officials were so nervous about how a splashy, Hollywoodesque party would look to jobless Americans -- or their representatives in Congress, who would soon vote on health care -- that the event was not discussed publicly, and Burton and Depp's contributions went unacknowledged."
The event, so over the top that "Star Wars" creator George Lucas loaned out the original Chewbacca costume from the legendary film for an unknown participant to wear, was covered by a front event for the press in which the first couple handed out candy to trick or treaters. The president did not don a costume to that event, but first lady Michelle Obama wore a leopard-print sweater, cat ears and sparkly eye makeup.
Inside, at the invitation-only affair for children of military personnel and White House administrators, the State Dining Room served as Wonderland while Depp greeted guests from a table-top and Burton decorated the White House "in his signature creepy-comic style."
According to the book, fruit punch was served in blood vials and a magic show was held for the kids in the East Room.
The book, out Tuesday, was picked up by Fox News. While Kantor interviewed 30 administration aides for the read, she hasn't interviewed the Obamas since 2009, and that, say aides, is problematic.
"The emotions, thoughts and private moments described in the book, though often seemingly ascribed to the president and first lady, reflect little more than the author's own thoughts. These second-hand accounts are staples of every administration in modern political history and often exaggerated," said White House spokesman Eric Schultz.
But the author's narrative is revealing. She details several glimpses of the first couple's marriage, parenting and staffing issues, describing how Michelle Obama was conflicted about wanting to be part of the inner circle while also wanting to distance herself from the role of first lady.
According to the book, Michelle Obama also had an intense distrust of former Chief of Staff Rahm Emanuel, who has since become Chicago mayor. Emanuel and senior aide Valerie Jarrett also had some nasty spats after Emanuel tried to freeze her out because he saw her as a spy for the first lady.
"Michelle and Rahm Emanuel had almost no bond; their relationship was distant and awkward from the beginning," Kantor wrote.
The book portrays Mrs. Obama wanting to influence West Wing policymaking, but Democrats friendly to the White House noted to Fox News that Kantor appeared to say the opposite during an interview with Chicago magazine.
In an interview last week, Kantor said the first lady struggled with Hillary Clinton's legacy and never wanted to be seen as the kind of wife who was overly involved in the president's duties, hence she grappled over whether to have an office in the West Wing.
Asked is she is an adviser to the president, Kantor told the magazine, "In the most private, intimate sense, not in the sense of 'I'm coming to your senior staff meeting.'"
On Sunday, Obama adviser David Axelrod, who is working on the president's reelection from the campaign's Chicago headquarters, said that the first lady is a sensational person and she will be on the election trail.
Earlier, Axelrod said Michelle Obama does make a point "when she thinks things have been mishandled or when things are off the track ... she'll raise it, because she's hugely invested in him."
But White House aides did find themselves in the middle of the Obama marriage, Kantor wrote.
“The advisers could feel hopelessly caught between husband and wife. The Obama marriage was awkward for everyone: for the aides, for the president ... and for the first lady."
Read more: http://www.foxnews.com/politics/2012/01/08/book-white-house-hosted-hollywood-halloween-bash-before-burton-film-release/?intcmp=obnetwork#ixzz1j0lzoxCg
Posted by MrGarabaldi at 7:50 PM