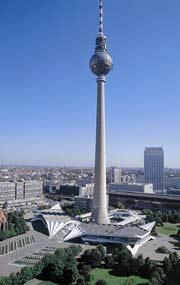 When I went to Berlin for the first time in 1987, I drove the  Helmstedt Berlin Autobahn with Check Point Alpha to Check Point Bravo.  We used "flag orders" that basically had a picture of the American Flag with our names on it in both English, French and Russian.  It gave us travel rights to Berlin through the corridor.  We had to stop at 2 Soviet Checkpoints on the autobahn and unless you "donated" a porn magazine to the Russians behind a wall, you waited exactly 45 minutes for them to stamp your flag orders( I framed one of mine) so you can proceed to the next check point.  You also had an opportunity to give the guard some money for a soviet military badge or something.( I have a couple laying around).  After you got to  West Berlin it was a 24 hour party.  I had an opportunity to go to East Berlin through the Famous Checkpoint Charlie.
there were Other Berlin Border Crossings but we couldn't use them by the status of forces agreement and the 4 powers occupation of Berlin.  Berlin still was considered an "occupied" city outside the purview of West Germany and it was run by the Garrison commander of Berlin. 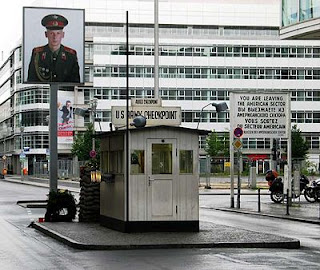 We were not told to acknowledge the East German Guards since we considered East Germany not the "real" Germany...That was West Germany for us.  The Soviets had the same attitude toward the West Germans.  Once we crossed over to East Berlin, it was dour compared to West Berlin.  We saw scaffolding everywhere so it looked like it was under construction but I still saw the bullet holes in the walls where Marshall Zhukov 1st Bellerussian front crashed into the city in what the locals called Gotterdammerung. or the End of the battle in the east

One of the sights of East Berlin was the Fernsehturm 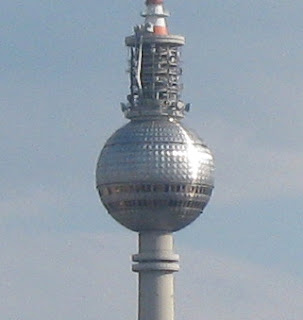 This is called the "Popes Revenge"
When the sun shines on the Fernsehturm's tiled stainless steel dome, the reflection usually appears in the form of a crucifix. This effect was neither predicted nor desired by the planners. Berliners immediately named the luminous cross Rache des Papstes, or "Pope's Revenge". For the same reasons, the structure was also called "St. Walter" (from Walter Ulbricht).
U.S. President Ronald Reagan mentioned this phenomenon in his "Tear down this wall" speech on 12 June 1987:[3]

"Years ago, before the East Germans began rebuilding their churches, they erected a secular structure: the television tower at Alexanderplatz. Virtually ever since, the authorities have been working to correct what they view as the tower's one major flaw: treating the glass sphere at the top with paints and chemicals of every kind. Yet even today when the sun strikes that sphere, that sphere that towers over all Berlin, the light makes the sign of the cross. There in Berlin, like the city itself, symbols of love, symbols of worship, cannot be suppressed."

The Fernsehturm (German for "television tower") is a television tower in the city centre of Berlin, Germany. Close to Alexanderplatz and part of the World Federation of Great Towers (WFGT), the tower was constructed between 1965 and 1969 by the former German Democratic Republic (GDR) administration who intended it as a symbol of Berlin, which it remains today, as it is easily visible throughout the central and some suburban districts of Berlin. The Fernsehturm is the tallest structure in Germany.

In 1964, Walter Ulbricht, leader of the Socialist Unity Party which governed East Germany, decided to allow the construction of a television tower on Alexanderplatz, modelled on the Fernsehturm Stuttgart. IT was intended as a show of the GDR's strength, while its location is thought to have been deliberately chosen so that it would impose on views of West Berlin's Reichstag building (when viewed from the front). The architecture traces back to an idea from Hermann Henselmann, and Jörg Streitparth. Walter Herzog and Herbert Aust later also took part in the planning. Construction began on 4 August 1965. After four years of construction, the Fernsehturm began test broadcasts on 3 October 1969, and it was officially inaugurated four days later on the GDR's National Day. It is among the best known sights in Berlin, and has around a million visitors every year.

Construction of the tower had initially begun at a site in southeast Berlin's Müggelberg. However, the project was stopped because such a tall tower in that location would have obstructed aircraft entering and leaving from the nearby Schönefeld International Airport
Posted by MrGarabaldi at 1:15 AM