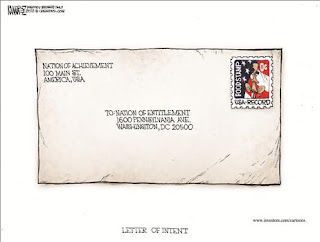 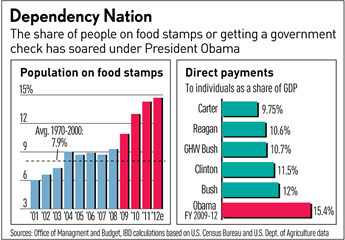 View Enlarged Image
If the Republican primaries are any indication, one big debate in the upcoming election will be whether President Obama is pushing the country toward a European-style welfare culture.
Mitt Romney, for example, argues that "over the past three years, Barack Obama has been replacing our merit-based society with an entitlement society."
Newt Gingrich has taken to calling Obama "the best food-stamp president in American history."
Obama, in contrast, says the government must play an increasing role — what he likes to call "shared responsibility" — to ensure a society that is fairer.
So is Obama turning the country into a welfare society and away from one focused on opportunity?
While it's true that the country has been headed in this direction for many years — with the explosion in entitlements since the 1960s and the aging of the population — Obama has, in fact, greatly accelerated the trend. Examples:
Direct payments. The amount of money the federal government hands out in direct payments to individuals steadily increased over the past four decades, but shot up under Obama, climbing by almost $600 billion — a 32% increase — in his first three years. And Obama's last budget called for these payments to climb another $500 billion by 2016, at which point they would account for fully two-thirds of all federal spending.
People getting benefits. According to the Census Bureau 49% now live in homes where at least one person gets a federal benefit — Social Security, workers comp, unemployment, subsidized housing, and the like. That's up from 44% the year before Obama took office, and way up from 1983, when fewer than a third were government beneficiaries.
Food stamps. This year, more than 46 million (15% of all Americans) will get food stamps. That's 45% higher than when Obama took office, and twice as high as the average for the previous 40 years. This surge was driven in part by the recession, but also because Obama boosted the benefit amount as part of his stimulus plan.
Disability. The number of people on Social Security disability has steadily climbed since the 1970s, thanks mainly to easier eligibility rules. But their numbers jumped 10% in Obama's first two years in office, according to the Social Security Administration. That sharp rise was due largely to meager job prospects since the recession ended in 2009. When employment opportunities are scarce, experts note, many who could otherwise work sign up for disability benefits instead.
Health care. The government's role in health care has grown over the past decades, with 45% of all health spending now coming from the federal government, up from 32% in 1990. But this trend will dramatically accelerate should ObamaCare remain the law of the land. In eight years, ObamaCare will add 16 million people to Medicaid, according to the Congressional Budget Office, and another 24 million will be getting coverage through heavily subsidized government-run insurance exchanges, with the cost of those subsidies running $130 billion a year.
Corporate welfare. Prior to Obama, the federal government was already dishing out $92 billion in corporate welfare programs — in the form of subsidized loans, special tax breaks, bailouts and the like — the Cato Institute found. Obama added tremendously to this largesse. Federal grants to the energy sector, for example, quadrupled to over $18 billion in 2009, according to the Pew Charitable Trusts' Subsidyscope.
While each of these and other federal benefit programs may be designed with good intentions, their combined weight is already overwhelming the budget.
In just nine years, entitlement spending is on track to eat up 61% of the federal budget, according to the CBO. And unless these programs are cut back, they will soon consume all federal taxes, one CBO budget scenario predicts.
The problem is that once federal benefits get started, few Americans want to see them cut back, much less eliminated. Even with $1 trillion annual deficits, just 24% would support cutting Social Security and only 16% would back Medicare cuts, according to the November 2011 IBD/TIPP poll.
"Once we thought 'entitlement' meant that Americans were entitled to the privilege of trying to succeed in the greatest country in the world," Romney said in a recent speech. "But today the new entitlement battle is over the size of the check you get from Washington."
Posted by MrGarabaldi at 11:21 AM