I saw this on PJmedia.

Drive through New Hampshire in the next week, and you will see a staggering number of Republican yard signs. They’re everywhere: It seems like every third house has a sign up. They’re on front yards and in the windows of businesses. They’re in every neighborhood representing every demographic. They’re in front of homes along rural roadways, in front of suburban homes in the big southern towns, and in the conservative blue-collar neighborhoods of Manchester.
And there are even Republican yard signs all over the capital city of Concord — a largely Democratic-leaning town in this swing state.
Barack Obama is in big trouble next November. 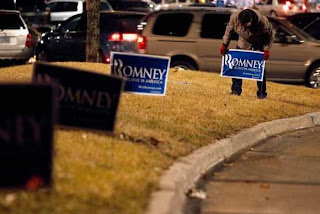 In elections, yard signs provide the essential “social proof” to back up the television ads, debate performances, and stump speeches — especially when it comes time to close the deal with relatively apolitical or undecided voters.But this is a Republican primary. What do January yard signs have to do with Barack Obama?
Here is a secret: If you want to predict a general election, count the number of Republican yard signs in “purple” neighborhoods. Take a drive through an upper-middle class community in a swing state. Find the subdivision where there’s a coffee shop on the corner and an organic grocery store not too far away, ideally where the Priuses outnumber the SUV’s… but not by much. Find the block where the adults are academics, professionals, or government employees and where every household has a couple of kids in the public schools. The voter breakdown in the ideal “purple” neighborhood is about a third Republican, a third Democrat, and a third independent.
Welcome to Concord, New Hampshire. Or Fort Collins, Colorado. Or northern Virginia. Or Raleigh, North Carolina. Or the suburbs and exurbs and small cities in swing states around the country.
Now count the Republican yard signs. Signs are not polling data, and they are certainly not election returns, but a yard sign is a definitive measure of three things: Support (obviously); intensity; and –  most importantly  — a voter’s willingness to make his political opinions known to his neighbors. A yard sign — especially in a “hostile” environment — is a symbol of political courage, a sign of an impending shift in public opinion.
The early returns from the yard sign tallies are in: Voters in New Hampshire want their neighbors to know that they are voting Republican this year.
That is a big deal. If you live in a conservative community in a Republican state, it is hard to understand the open hostility towards Republicans in “purple” neighborhoods. Put up a sign in your yard and prepare to have your neighbors approach (or accost) you at the grocery store.  Prepare to have them bring your kids into the discussion. Prepare to have your business boycotted. There is no separation between the personal and the political on the left, so in a swing state a sign in your yard marks you as a target.
We saw this effect in 2006. My postmortem on the 2006 election debacle was titled “Cocktail Parties and Yard Signs.”  It focused on the small city of Fort Collins, Colorado, a college town of about 130,000 people. The city leans Democrat, the county leans Republican. The state is a battleground.  The thesis was simple: Republicans in Fort Collins were embarrassed — almost afraid — to put Republican signs up in their front yards.
The “cocktail parties” part of the title refers to how fast Republicans will disavow their own nominee in non-political settings. Go to a cocktail party and listen for the telltale phrase “I’m a registered Republican, but…”  Even worse, listen to someone who you know to be a staunch conservative Republican describe themselves as an “independent who votes for the person more than the party.”
The “Cocktail Parties and Yard Signs” effect means that the pressure from the left has won. It means that a certain level it is no longer “socially acceptable” to be a Republican. Republican candidates do not have a chance in that climate.
Actually, we all experienced a similar form of pressure in 2008 on Facebook. When I describe Facebook to political clients, I describe it simply as a front porch in a tightly-knit neighborhood. Social media provides limitless opportunity for word-of-mouth campaigning, but like in the real world, when you put a sign out, you are going to hear from your neighbors.  On Facebook, the only candidate on the ballot in 2008 was Barack Obama, and we all heard from our friends, relatives, and long-lost high-school buddies about Hope and Change.  That’s the dynamic every cycle in “purple” neighborhoods.
Which brings us back to New Hampshire.
New Hampshire is a purple state.  Twenty years ago it was one of the most Republican states in the country, but Bill Clinton (twice), John Kerry, and Obama all carried the state in general elections. The Republicans lost the governorship in 1996, and the Democrats made relatively consistent gains over the following decade. After the 2006 election, Democrats held both Congressional seats, the governorship, and both houses in the legislature (for the first time since 1911).  The 2010 election saw the pendulum swing decisively back to the Republicans, but no one was sure if that would translate beyond 2010 and into the presidential race.
Today there are Republican signs up all over New Hampshire.  Most tellingly, there are Republican signs up throughout the city of Concord — more than I have ever seen.  It is “safe” to tell your neighbors that you are voting Republican.
Barack Obama is in big trouble.
Posted by MrGarabaldi at 12:11 PM