A quick guide to understanding the Middle East..

This graph is a tongue in cheek representation of the middle east.   To expound upon it, Everything over there is based on "tribe" or family.  The tribal ties are stronger than the national identity, the average person has a stronger loyalty to "his" family or tribe than to the nation.  As far as Syria, understand that Assaud is fighting so his tribe and extended family survives, if he loses, his family and extended family will be tortured then wiped out.  That is how it is in a nutshell over there.  I remembered a term that I used to describe Africa, " it is always 5 minutes to high noon somewhere in Africa".  That same phrase holds true for the middle east.  With the conflicting sunnia/shiites division in Islam that causes a lot of bloodshed.  Kinda like the Catholic/Protestant feuding in Ireland but on a much larger scale.   We don't have a dog in this fight in Syria, no matter who we help, they will hate us.  It is better that they solve their own division rather than drag us into it. 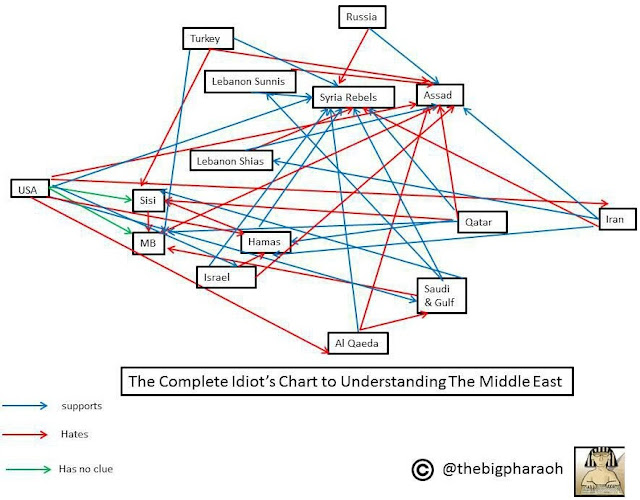 Posted by MrGarabaldi at 8:07 PM