The Blood Dancers are at it again....

I wanted to wait a bit before commenting on the Washington Naval Yard shooting...I wanted to wait a bit and let the family mourn...it is a respect thing...Something I wish the politicians especially those on the left seem to unable to locate or use.  We have Senator Dianne Feinstein immediately before the blood was even cold schilling for more gun control. 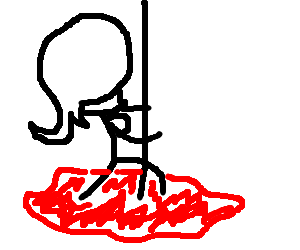 The same politician that had a hearing to restrict the first amendment rights of those she considers "alternative media".  It is all about control, the elitist which she is part of believe that we the great unwashed masses need our betters in Washington D.C. on how to live.  That is a big issue with me is the blatant hypocrisy displayed on the left.  She has her bodyguards to protect her from the same masses that she wants to restrict our ability to defend ourselves and control the information so we will become the drones that the statist believe in to help run the utopia that they envision for us.
Now we will have to endure more calls for gun control, they keep telling us that we need " to compromise on our rights...Lemme get my dictionary....Compromise

a settlement of differences by mutual concessions; an agreement reached by adjustment ofconflicting or opposing claims, principles, etc., by reciprocal modification of demands.
2.

the result of such a settlement.
3.

something intermediate between different things: The split-level is a compromise between a ranch houseand a multistoried house.
4.

an endangering, especially of reputation; exposure to danger, suspicion, etc.: a compromise of one'sintegrity.

So to compromise..I have to give up something......what does the anti-gunner give up....NOTHING>>>ZIP >>>NADA...They don't give up crap.  Until the next time another squirrel uses a firearm, then they will want more compromise which basically means..we lose more of our rights.   I am not going to give up anything anymore.  All we have done in the past is try to be reasonable....Well I am done being reasonable.
The Anti-gunners keep missing the point...They are trying to legislate morality and it doesn't work.  The people that do bad things already broke other laws...What will passing more laws accomplish....?  As I understand it, the nutcase that did the shooting already had been jailed for violence and gun related incidences and he had a security clearance? 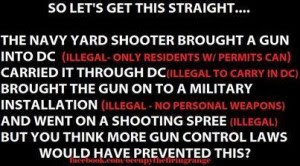 When will they learn..This is people control they want..they use the guise of "Gun Control" but it is basically "people control" and it is very difficult to control people especially since there are about 300 million of us in the United States and we all are individuals with individual issues and they want to use a "cookie cutter" approach to this.  The attitude is to "Do Something"  so to rush out and pass a bad law will somehow sooth the conscience of the lawmakers that believe that they have to do something.   How about enforcing the existing laws.   Now we have Carney saying that Obungler will sign more executive actions to get something going.....Nothing like "not letting a crisis go to waste."  We already have major intrusions into peoples privacy and they want to do more.  We already have vets that will not seek help because they will be put into a database and have their 2nd amendment rights stripped without due process.  I really believe that it shows a lapse in a national fiber because of all these violence.  Many years there was no gun control and people pulling off a mass shooting was unheard of,  Now it is a sigh of the times for mass shootings.  I keep wondering if we as a country will survive the next 20+ years.
Posted by MrGarabaldi at 8:26 AM