I have been very busy with Boy Scouts since my son "crossed over" from cub scouts to boy scouts.  We went on his first primitive camp out(no electricity). My son had a good time, he tried to fish, he wanted to earn the "fishing" merit badge, part of the requirement is that he had to catch 3 different kinds of fish. 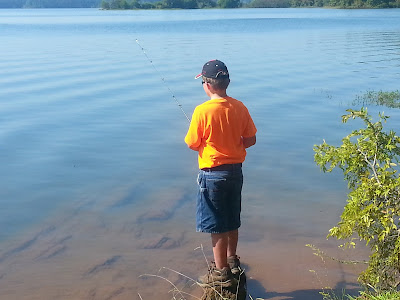 He was very persistent, but to no avail did he catch any fish...I believe that it was because of all the scouts "accidentally" falling into the water scared all the fish away.     The Boy Scouts are " Boy" run not adult run like the cub scouts are, so the boys do all the work instead of the adults, we basically keep them out of mischief and make sure that they "learn" safely.  Some of the things that they do on their own is "cook", in the cub scouts, the adults worked the grill.  Well in the Boy Scouts, the scouts cook.  It is part of their system. 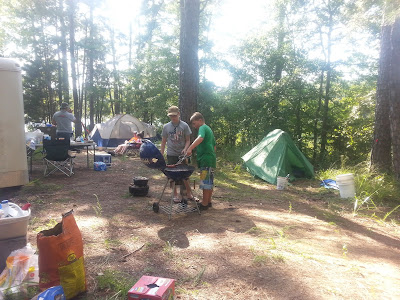 My son using the grill for the first time.  Like I said, the boys do all the stuff for themselves,  He was excited that he was cooking on real charcoal and he made me proud that he did "man up" and volunteer and got the job done. 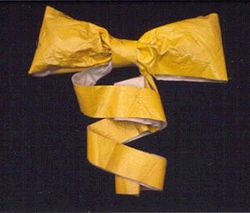 Yellow ribbon flown in 1979 by Penne Laingen when her husband, US diplomat Bruce was held captive during the Iran hostage crisis; among the first of the modern "yellow ribbons."


I decided to change gears and go with an early 70's song, I heard this song on my Sirius/XM on my "70's channel."  I remember the song when it first came out and it did sound good and was easy especially for a kid to follow.  I also remember the yellow ribbons when they came out during the hostage crisis when the kooks in Iran overran our embassy due to our allowing the deposed Shah of Iran to enter the country for medical attention.    It later showed up all over the place when I was deployed to the Gulf in 1990 and 1991.  And it is associated with the returning of the troops.  When my brother was deployed in his first tour to Iraq, I had a yellow ribbon around a tree and it stayed up the entire 16 month deployment of his 1st armored division.   We combat vets are superstitious lot, and I was afraid that if I removed the ribbon, the good luck for my brother would dissipate so it stayed until his return.  It did look kinda rough at the end though.

During the Iran hostage crisis, the yellow ribbon was used a symbol of support for the hostages held at the United States embassy in Tehran. In November 1979, a committee headed by Suzan E. Garrett of the Jaycees ladies service organization in Leitchfield, Kentucky organized a campaign to "Tie A Yellow Ribbon" around public trees as well as encouraging people to wear tied ribbons on lapels in support of the U.S. hostages being held in Iran. She was interviewed on ABC-TV by Ted Koppel on the newly created Nightline late-night news program and later by Peter Jennings for ABC's World News Tonight.
This symbolism continued and gained further notoriety in December 1979, when Penelope Laingen, wife of Bruce Laingen who was the most senior foreign service officer being held hostage, tied a yellow ribbon around a tree on the lawn of her Maryland home. The ribbon primarily symbolized the resolve of the American people to win the hostages' safe release. Yellow ribbons featured prominently in the celebrations of their return home in January 1981.
The yellow ribbon saw renewed popularity in the United States during the Gulf War in the early 1990s. It appeared along with the slogan "support our troops", in the form of yellow ribbons tied to trees, and countless other contexts. It often had the implied meaning of "bring our troops home" from the Desert Shield and Desert Storm troop deployments. It appeared again during the 2003 invasion of Iraq with similar meanings, most prominently in the form of a yellow ribbon printed on magnetized material and displayed on the outside of automobiles. 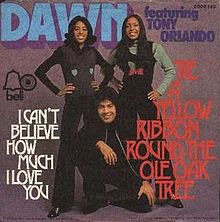 "Tie a Yellow Ribbon Round the Ole Oak Tree" is a song by Dawn featuring Tony Orlando. It was written by Irwin Levine and L. Russell Brown and produced by Hank Medress and Dave Appell, with Motown/Stax backing vocalist Telma Hopkins, Joyce Vincent Wilson and her sister Pamela Vincent on backing vocals. It was a worldwide hit for the group in 1973.
It reached number one on both the US and UK charts for four weeks in April 1973, number one on the Australian charts for seven weeks from May to July 1973 and number one on the New Zealand charts for ten weeks from June to August 1973. It was the top-selling single in 1973 in both the US and UK. In 2008, Billboard ranked the song as the 37th biggest song of all time in its issue celebrating the 50th anniversary of the Hot 100.

The song is told from the point of view of a prisoner who has completed his three-year sentence but is uncertain if he will be welcomed home.
He writes his love, asking her to tie a yellow ribbon around the "ole oak tree" in front of the house (which the bus, bringing him home from prison, will pass by) if she wants him to return to her life; if he does not see such a ribbon, he will remain on the bus (taking that to mean he is unwelcome). He asks the bus driver to check, fearful of not seeing anything,.
To his amazement, the entire bus cheers the response – there are 100 yellow ribbons around the tree, a sign he is very much welcome.

The origin of the idea of a yellow ribbon as remembrance may have been the 19th century practice that some women allegedly had of wearing a yellow ribbon in their hair to signify their devotion to a husband or sweetheart serving in the U.S. Cavalry. The song "'Round Her Neck She Wears a Yeller Ribbon", which later inspired the John Wayne movie She Wore a Yellow Ribbon, is a reference to this.
The symbol of a yellow ribbon became widely known in civilian life in the 1970s as a reminder that an absent loved one, either in the military or in jail, would be welcomed home on their return.
The story of a convict who had told his love to tie a ribbon to a tree outside of town is an American folk tale, dating to before 1959. In October 1971, newspaper columnist Pete Hamill wrote a piece for the New York Post called "Going Home". In it, he told a variant of the story, in which college students on a bus trip to the beaches of Fort Lauderdale make friends with an ex-convict who is watching for a yellow handkerchief on a roadside oak in Brunswick, Georgia. Hamill claimed to have heard this story in oral tradition.
In June 1972, nine months later, Reader's Digest reprinted "Going Home". Also in June 1972, ABC-TV aired a dramatized version of it in which James Earl Jones played the role of the returning ex-con. A month and a half after that, Irwin Levine and L. Russell Brown registered for copyright a song they called "Tie a Yellow Ribbon 'Round the Ole Oak Tree". The authors said they heard the story while serving in the military. Pete Hamill was not convinced and filed suit for infringement. Hamill dropped his suit after folklorists working for Levine and Brown turned up archival versions of the story that had been collected before "Going Home" had been written.

In April 1973, the song reached No. 1 in the Billboard Hot 100 (chart date April 21, 1973) in the US, and stayed at No. 1 for four weeks. "Tie A Yellow Ribbon" sold 3 million records in the US in three weeks. It also reached N. 1 on the Adult Contemporary chart, and BMI calculated that radio stations had played it 3 million times from seventeen continuous years of airplay. It also reached No. 1 in the UK and Australia, and has sold 1 million copies in the UK.

Posted by MrGarabaldi at 4:18 PM