Syria and how our President got punked by Putin... 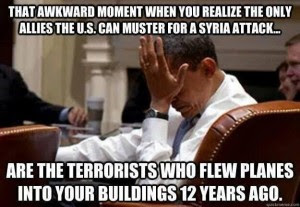 Well, if you’re one of those out there who has thus far failed to see the dominance of Vladimir Putin in the Putin/Obama relationship … the light surely must be shining now.  In the last 24 hours The Chicago Messiah has managed to show not only America, but the rest of the world, just how weak he is on the world stage.
A bit of a recap here to show you what kind of a bind Obama was in: 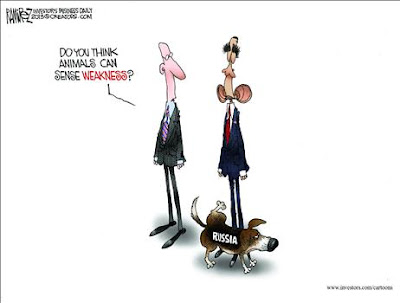 Putin (background – ass-kicking KGB operative) sees a way to take advantage of this situation to both embarrass and establish a stronger dominance over 0bama (background – pot-smoking community organizer and freeloader).  Putin heard John Kerry make a bit of a mistake at a presser.  Flipper is asked what Assad can do to avoid an attack.  The Flipper suggests that Assad could turn over his chemical weapons.  The White House immediately refutes the idea, and Flipper’s handlers start trying to walk the comment back.  But Putin was listening … and he makes his move.
Putin, loyal to his primary goal here is to keep his pal Assad in power, immediately seizes on Kerry’s idea and makes it a firm proposal.  Just that quickly Putin takes control.
Now Obama sees a way out.  He knows that Putin is controlling the situation here, but at least now he can avoid an embarrassing congressional “no” vote, the first in American history.  But hmmmmmm.  Maybe Obama can get some of his grove back here.  So he tells us that he was actually talking about this plan for Assad to give up his chemical weapons when he was meeting with Putin last week!  Yeah … sure. 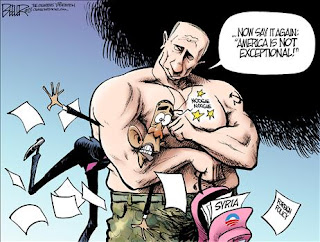 So …. Here we are.  Harry Reid has already put off the Senate vote.  After tonight’s speech by Obama Reid will probably announce that the vote is postponed indefinitely.  The House may go ahead with a vote, but in light of Putin’s little parlay that vote will be cast as nothing more than an attempt to embarrass the anointed one.
An agreement will be reached between the ass-kicker, the community organizer and the gasser for Syria to turn over “all” of its chemical weapons.  Of course “all” of the weapons will not be turned over.  There will be inspections, but Putin will work with Assad to make sure the inspections are not too thorough.  In the end Assad will keep a good portion of those chemical weapons, and Putin will supply him with even more arms including the S-300 series missile system.
Down the road chemicals weapons will be utilized again and Assad can say " I turned in all the chemical weapons...Must be some rebel faction using it."
Obama's foreign policy is like an episode of the "Keystone Cops", total amateurs bumbling from one crisis to another most of them due to their own making. 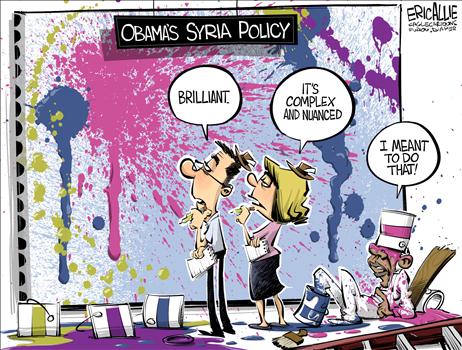 Posted by MrGarabaldi at 8:37 PM